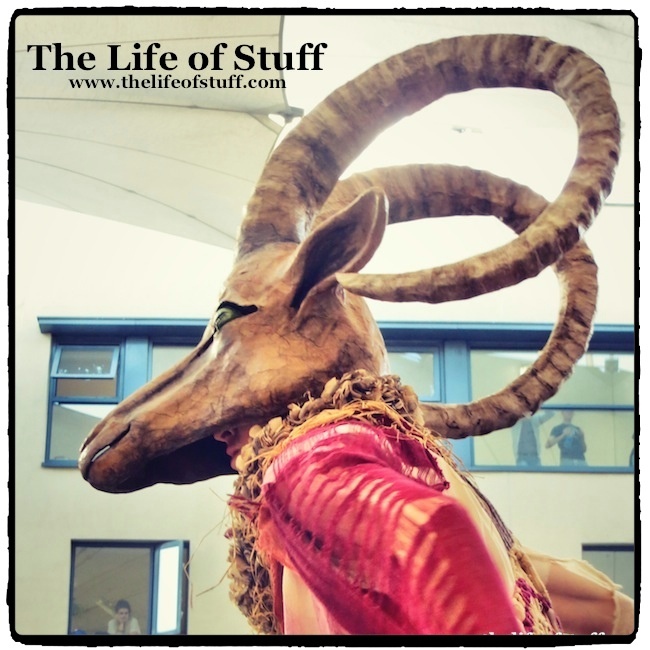 I booked two tickets for Patrick and I to see Macnas’ Chaosmos last Sunday. For more information on Macnas, follow this link here to the history page of their website. I knew we’d be in for a treat when I booked the tickets but at the same time I didn’t know what to expect, so much so, that when I was asked what I was going to see I found myself lost for words in a sense. I’m rarely lost for words but I did say art, theatre, drama and costumes … I think. The following is how it was described on the Dublin Fringe Festival website, and the words describe it well:

‘Chaosmos – a world in the act of becoming. Something magical is afoot on the streets of Dublin. Wild beasts follow an ethereal alchemist, accompanied by a curious insect on a penny farthing. As they meander their way through the city they create striking vignettes that will entice, excite and feed your curiosity. Macnas conjures up a magical feast of the senses in this walkabout boutique street show with a mysterious troupe who play, discover and recover the elixir of life.’

Chaosmos began it’s journey in Meeting House Square, took us up the streets of Temple Bar to the Temple Bar Square and then left us back on the streets. It was fantastic. The music that played in the square along with the characters that make up Chaosmos almost set the scene for a secret woodland rave, but only if you could visualise the concrete that surrounded us as trees. The costumes were woodland-y and dramatic, fun and a little eerie. They had us in the palm of their hands and the insect on the penny farthing led the way for us as we all walked through Temple Bar to the other Square. I overheard an ignoramus call us zombies as we all walked by, the few hundred of us, and I scoffed at his remark … but perhaps we were like zombies and Macnas’ Chaosmos was our brain food.

Macnas are renowned world-wide and there is no doubt why. They really understand the meaning of Art. To help you get a gist of what I mean, have a look at my photo’s below. Enjoy! 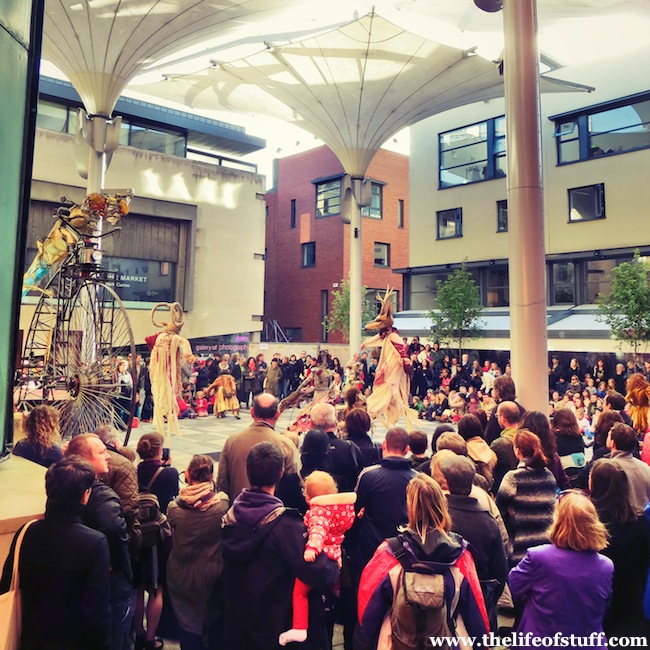 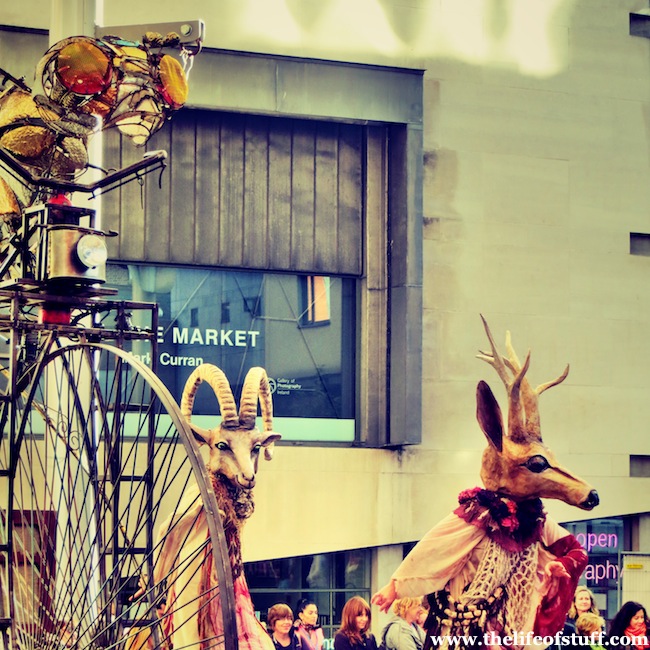 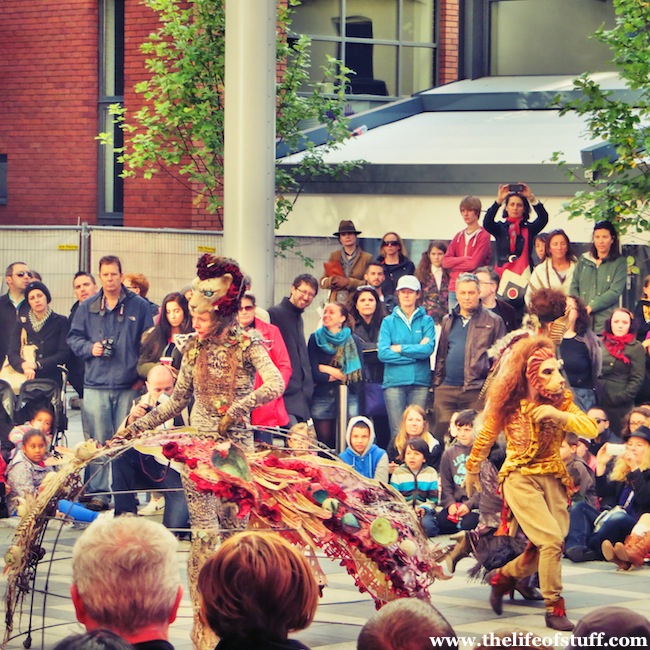 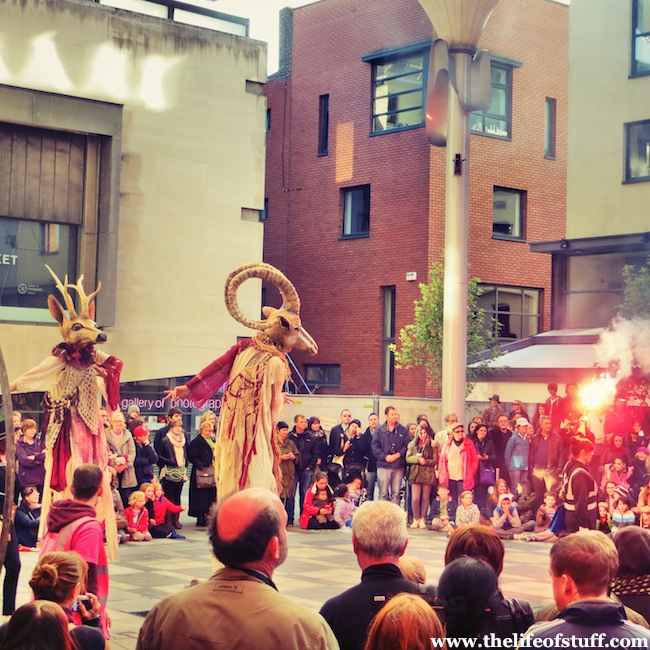 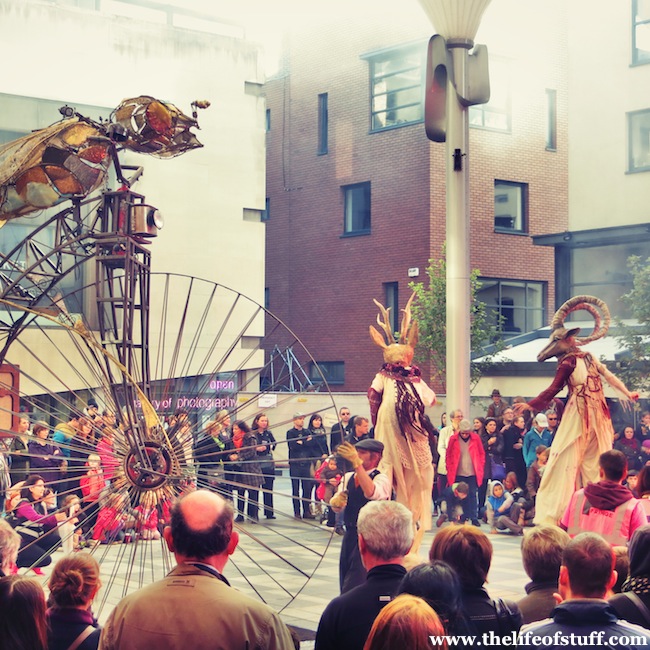 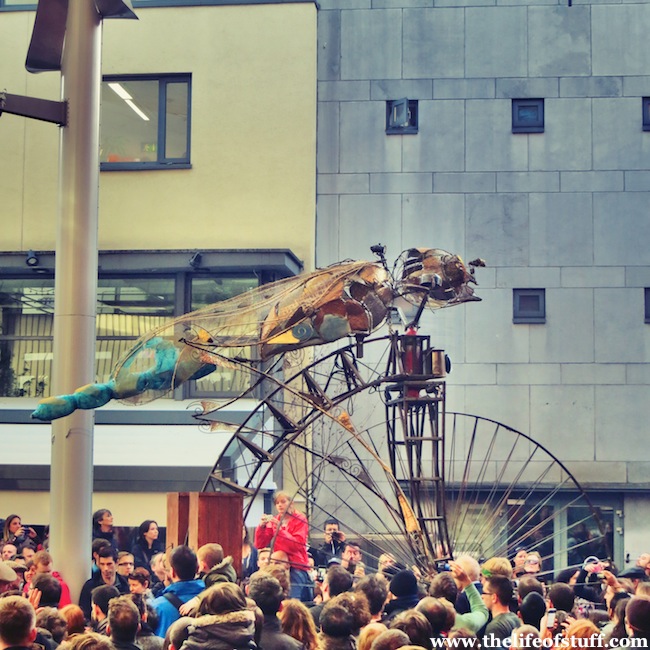 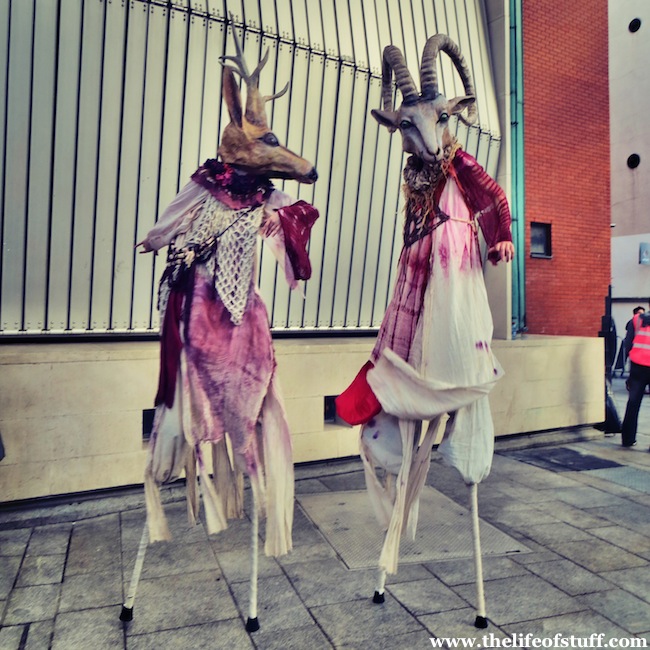 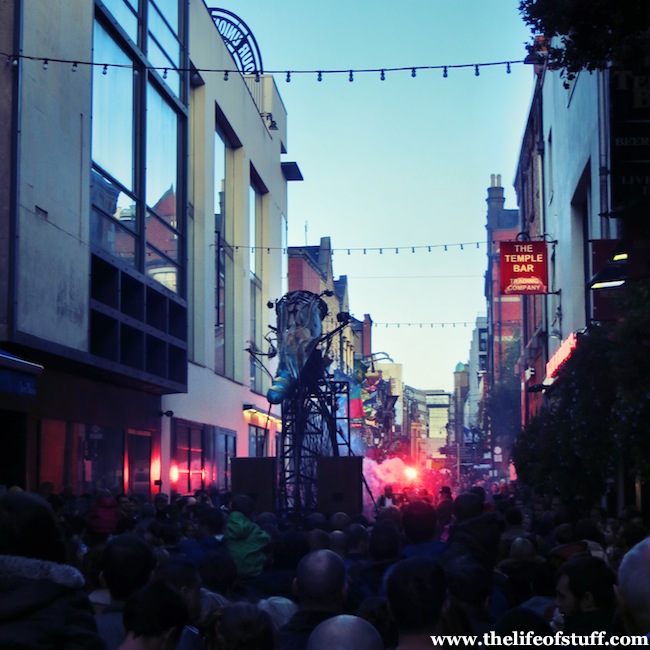 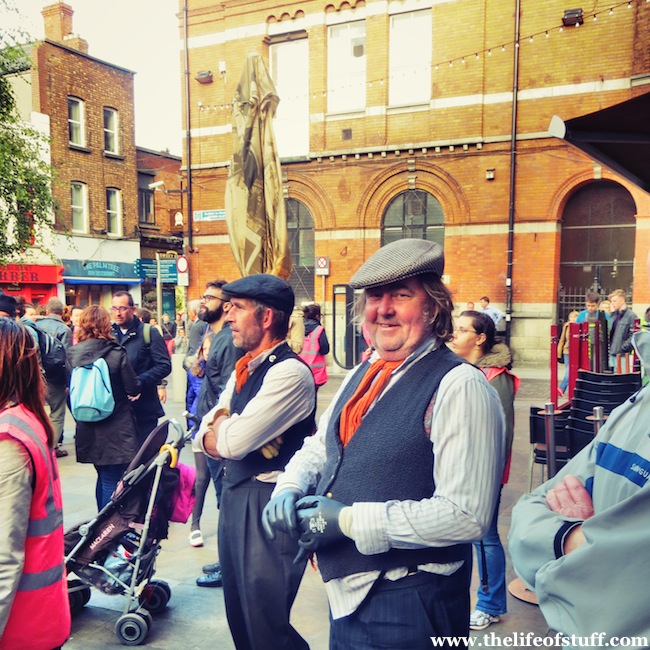 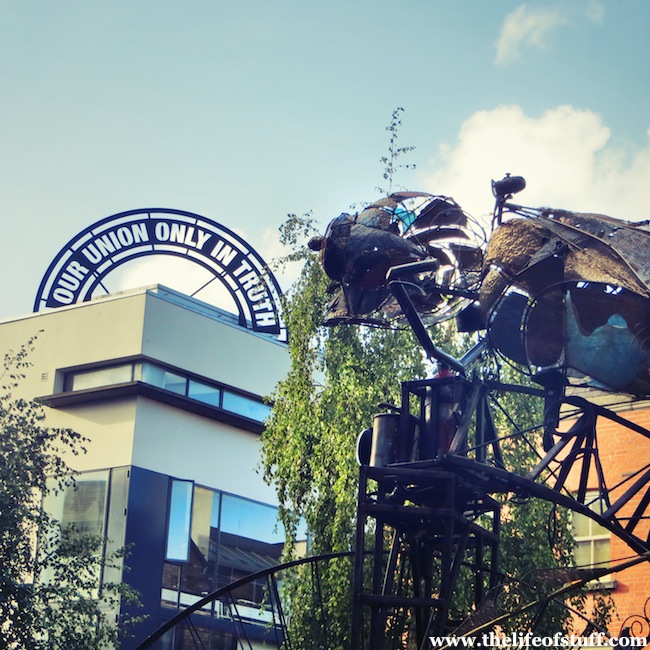 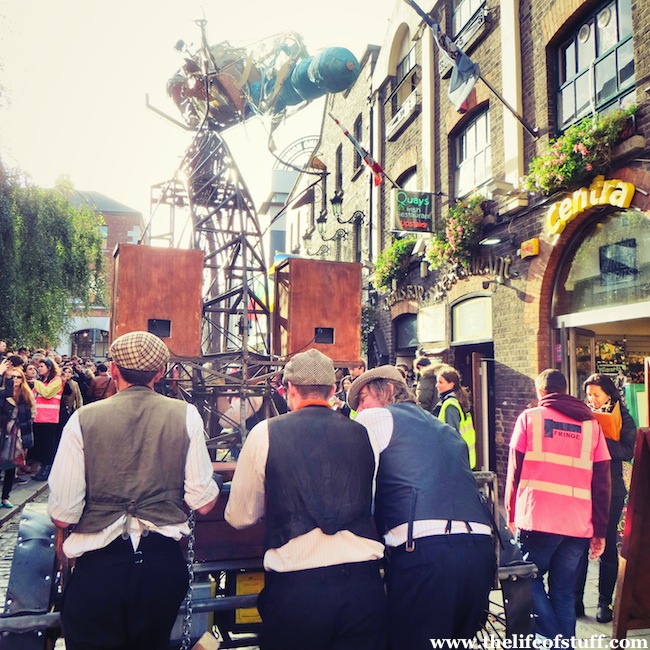 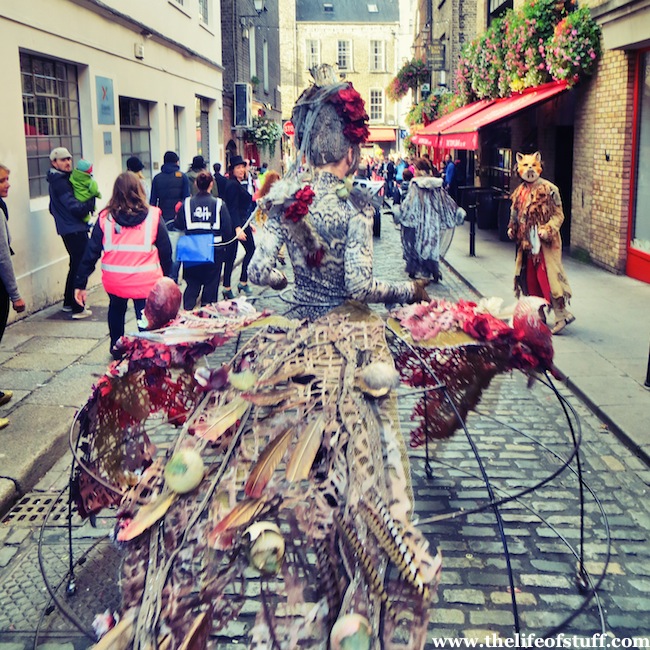