An Interview with Slave Zero – The Band 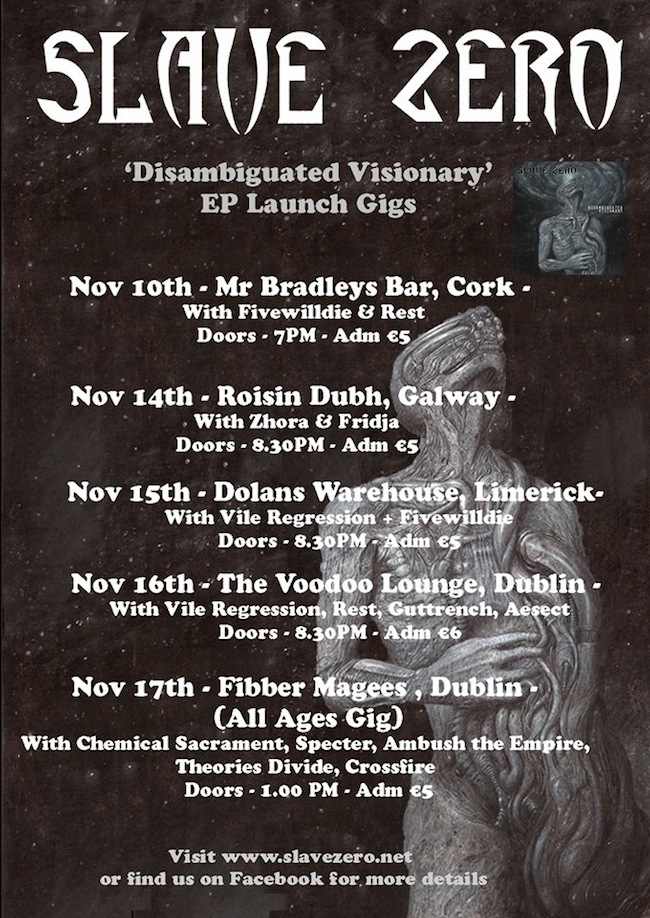 When I was younger, around 16 or so, the only way I got into a live venue to see a band was by pretending I was 18. I’m not saying this is the right thing to do. I’m not condoning it. The karma will probably bite me in the arse if I decide to have kids of my own and my head is wrecked with a mothers subconscious worry.

I hung around with older kids, just because I was one of the youngest in my class … so getting into Over 18 places kind of worked out okay for me. I went to college when I turned 17, so that worked in my favour too. However it’s not always that easy for teenagers to get to witness the bands they love. Not all teenagers have older friends, brother, sister or cool parent to take them to see who they want to see. So when I hear about bands making a point of performing ‘All Ages‘ gigs, I think fair dues. Why can’t the little people have some fun too and ‘The Simpsons’ one-liner comes to mind ‘ Won’t someone think of the children’ … and I suppose that’s exactly what Slave Zero have done by including an All Ages gig on their EP Launch of  ‘Disambiguated Visionary‘. 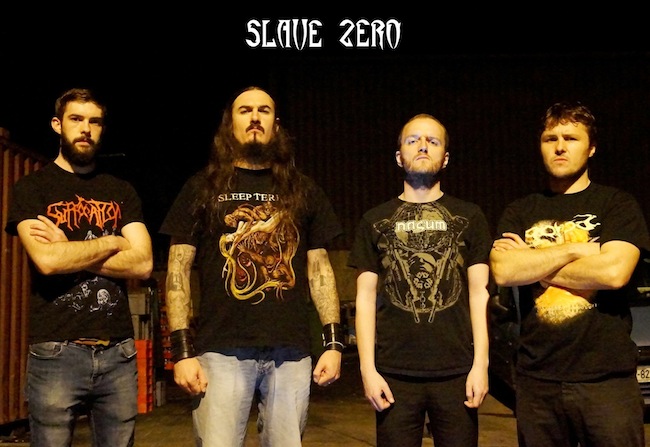 Slave Zero are a Death, Progressive, Grind, Hardcore – Metal band who hail from these fair shores, that being Ireland, folks. I know how to describe their music to their liking because I copied the mentioned genres from their Facebook page here. I would have left something out otherwise! They formed in 2000, which makes them 13 years old this year … lucky for some! My brother introduced me to the band, probably back in early 2000 and I’ve seen them perform on many occasions throughout their musical career. After some of these occasions I considered suing them for whiplash caused by my own uncontrollable head-banging but this consideration only ever amounted to a few hairs of the dog to sort things out.

Slave Zero released their first album ‘The Defiant Stand‘ in 2002, and it was received with critical acclaim. Following this they released their 2006 EP, ‘The Pain Remits‘ which was so well received the band packed up shop and gigged at some of the most well known venues around Europe with some of the most world renowned like-minded bands. In 2009 the band released their second album ‘Exempt from all Tolerance‘, which they followed with an Irish Tour. Now step up 2013, November to be precise and the lads are back with their newest five track EP and aforementioned launch of ‘Disambiguated Visionary‘. 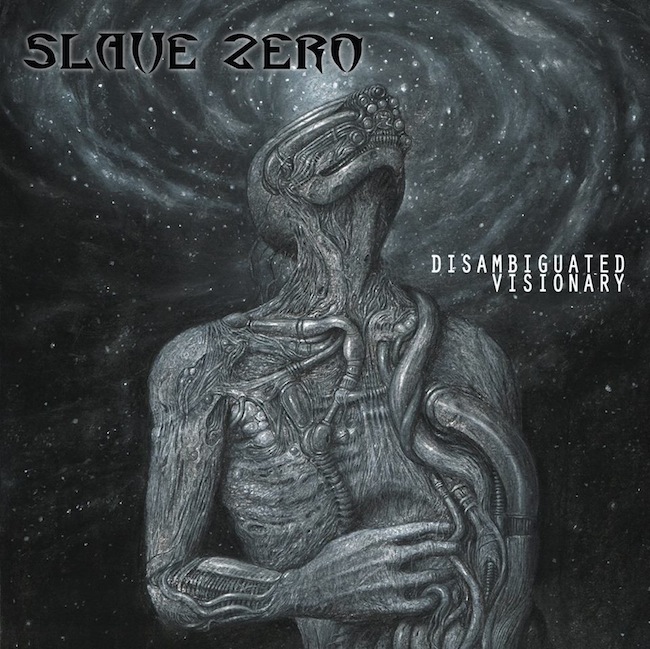 I’d like to say that I caught up with the band over a bottle of the strong schtuff, alas not. Nor was it over a nice cuppa, instead it was over this ‘ere internet, where I asked them a few questions on how gigging in Ireland in a ‘recession’ is, how important their new, possibly younger fans are, and a heap of other questions they probably didn’t answer and so have not been published … Enjoy!

Howaya lads, so to get straight into it … the EP Launch started last Sunday in Cork … what’s the mode of transport … planes, trains or automobiles?

Apart from your live gigs, where can the EP be bought?

For now, you can purchase the new EP via our big cartel page! We expect to have it available via other mainstream sites in the coming weeks.

How has the EP been received so far? What has your fan feedback been like?

We have had a fantastic response to date! We’re getting some very positive reviews in also which has been encouraging!

There are notable differences between this EP and the album you released four years ago, some would say a return to your metal roots, that someone would be me, am I right? … and what have been the influences on this EP?

This release is more focused on the Progressive & Death Metal elements where as on the ‘Exempt’ record there was a more Grindcore feel to some of the tracks. Lyrically, this time around we have branched off into unknown territory for us so to speak, a substantial amount of the new record lyrics are based around scientific theories. It keeps it interesting for us to push the boundaries of our capabilities.

Graeme is lead vocals, Eddie, guitars, Paddy on bass and Ben on drums. Who’s responsible for the music and lyric writing on this EP?

Graeme – Ed will generally write all the music and then thrash out patterns with Ben, once there is a somewhat orderly arrangement composed, the lads will record a rough draft to enable me to work on vocal patterns and from there I will then construct lyrics around it once I have a concrete idea as what the lyrics will relate to. Then we go in the studio to rehearse it and make any changes that will add to the overall track. It can take anywhere from one to three months to complete a tune so each step is scrutinised to ensure that it’s the best it can be. Paddy has just joined post EP recording but adds a lot with bass rhythms and creative ideas.

I think there has been a bit of a boom with Irish supporting ‘Irish’ since this ‘recession’ kicked in. Have you noticed a more positive or negative turnout for your gigs in comparison to your ‘celtic tiger’ gig days?

Well, we did a run of gigs back in summer of 2012 and the turnout was pretty dismal. They were fundraiser shows to finance this record – let’s just say we have funded this release 100% via our own incomes!! But overall, there seems to be an increase in support contributed towards Irish acts, there is a lot of talented bands in the country right now, I guess we’ll find out after this tour we’re doing right now!!

Who are your biggest fans?

Graeme – Well, there is a few heads certainly that have been there for the last 10 years or so.. This is great to see! Obviously, our families and friends regularly come to watch us if we are in a certain city or whatever. For me personally, probably my father!

Graeme – We made it a priority to play all ages shows back when we released ‘The Pain Remits’ EP and they were a phenomenal success. We have tried to maintain that since those days. I never had access to shows like that when I was younger so it gives the younger generation a doorway to explore and get turned onto this kind of music. Lets them know that all music isn’t manufactured crap like the main stream radio is pushing all day long. The all ages shows can be the most manic ones also so we’re hoping everyone will have a good time!

What’s the best piece of advise you’d give a budding band?

Graeme – Look at your local scene, try to offer something different, find decent musicians who are committed and work hard at your craft and support each other by attending gigs. The more you do something, the more accomplished you get at it so persevere. I have been playing in bands for about 15 years or so but when I first started doing vocals, we sucked! Ha ha You have to try and stick with whatever your vision is. Music is all subjective so takes the good with the bad. And grow a thick skin!!

Graeme – Well, one of my favourite Irish bands I’ll Eat Your Face just called it a day, so we have lost a gem there!  On the death metal side of things, definitely check out Dichotomy. They released a killer record this year and shot a video to one of the tunes. They are certainly one of the more exciting prospects for the year ahead. If you like your metal slow, sludgy and filthy, I play drums in another group called Weeping Ulcer. We’re planning a follow up to last year’s demo early in 2014! Two bands, opposite ends of the spectrum! Also keep a look out for Ben’s other band shardborne who play instrumental prog metal and Eddies new band Biznitch…

For more information on Slave Zero you can visit their website www.slavezero.net, where you can shop for their stuff and find links to all their music outputs. For your enjoyment I’ve included the video to track one from the EP, ‘Mathmatically Legitimate Solution‘. Turn it Up.