When visiting Madrid have you ever thought about exploring a little further afield? On my most recent trip to Madrid I visited and stayed in the historical city of Aranjuez.

How to get to Aranjuez

Aranjuez can be reached by car in about 40 mins, by train in 30 minutes for €6. Or by bus in 35 minutes for about €3. We travelled by car and the drive that took us out and south of Madrid was pleasant and effortless. If you don’t plan on staying in Aranjuez but do plan on day tripping during the months of May through to October. Then a fun option to visit the city is to travel via the historical ‘Strawberry Train’. Ticket prices range from €23 – €30 depending on which route your choose. You’ll find more information here.

With its cultural landscape receiving the status of World Heritage Site by UNESCO in 2001, the Royal Estate of Aranjuez has much to offer visitors.

“Three hundred years of royal attention to the development and care of this landscape have seen it express an evolution of concepts from humanism and political centralization, to characteristics such as those found in its 18th century French-style Baroque garden, to the urban lifestyle which developed alongside the sciences of plant acclimatization and stock-breeding during the Age of Enlightenment.” (unesco.org)

I feel Aranjuez is the perfect city to visit for a day trip out of Madrid city. Or indeed a place to explore and stay in for a couple of nights or more. My experience below of things to do, where I stayed and where I dined will give you a taste of what this royal city has in store.

Things To See & Do

Explore the Royal Palace of Aranjuez 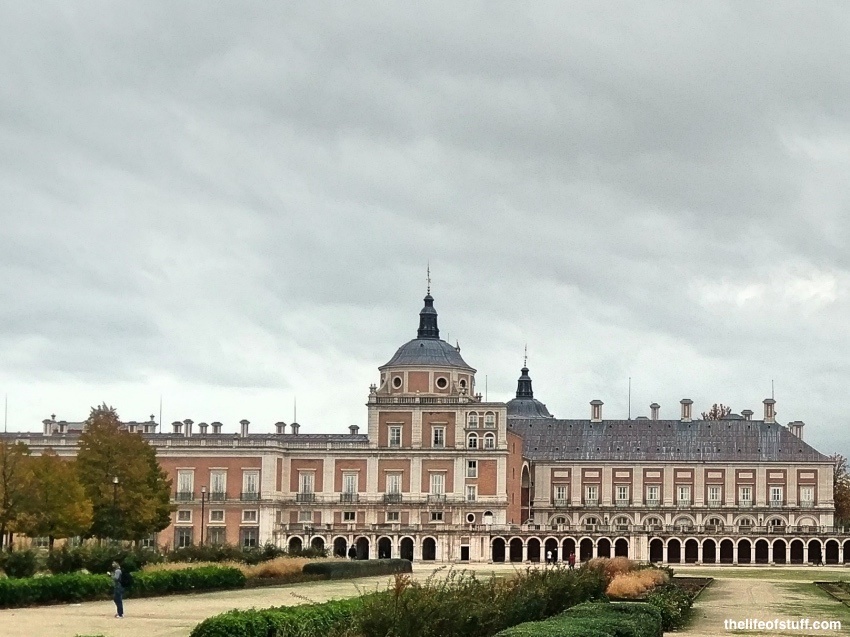 Open from Tuesdays through to Sunday’s the Royal Palace of Aranjuez in all its white stone and brick is beautiful in stature and luxurious within.

The Royal Palace took two centuries to complete. Building of the palace began in 1564 by Felipe II under the architectural guidance of Juan Bautista de Toledo. In 1715 Philip V continued building the palace up until 1752, twenty years later in 1775 Carlos III added the final two wings.

The Main Staircase of wrought iron and gilt bronzed railings was designed by Giacomo Bonavia and dates back to the mid 18th century. The steps of the stairs are made from single blocks of limestone from the nearby village of Colmenar. The French crystal chandeliers used 200 candles up until the early 19th century before moving to gas in Victorian times.

The Kings Chamber featuring religious paintings by Neapolitan painter Luca Giordano. The Queens Chamber made up with furniture designed by Francesco Sabatini. 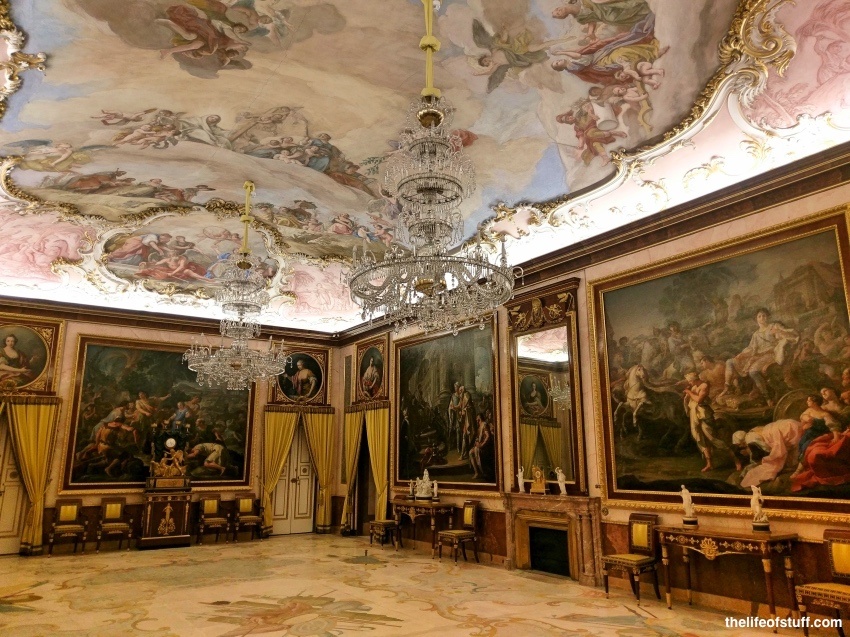 The luxuriousness of the chandeliers, the attention to detail of the ceiling, the symmetry of the chairs and consoles.

Two of the jewels in the crown for me were the Arabian Study or ‘Smoking Room’ with its eighty-one armed neo-gothic candelabrum, and the Porcelain Study with its floor to ceiling oriental styled porcelain plaques. 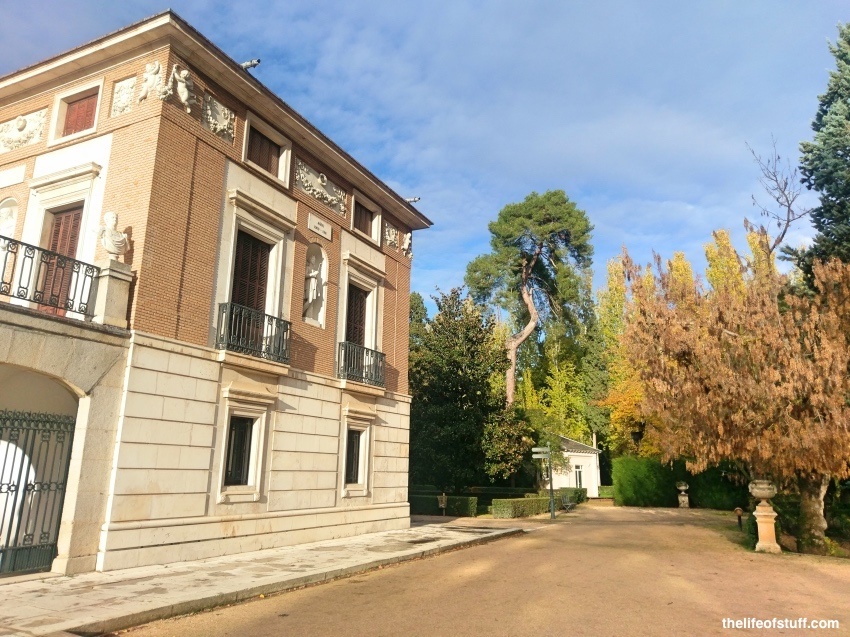 Casa Del Labrador, or ‘Farmer’s House’ was built during King Charles IV’s reign by Juan de Villanueva. It can be found within the Aranjuez Palace gardens near the banks of the River Tagus.

This small palace was built as a recreational palace for the King. It was somewhere he could either rest or entertain. 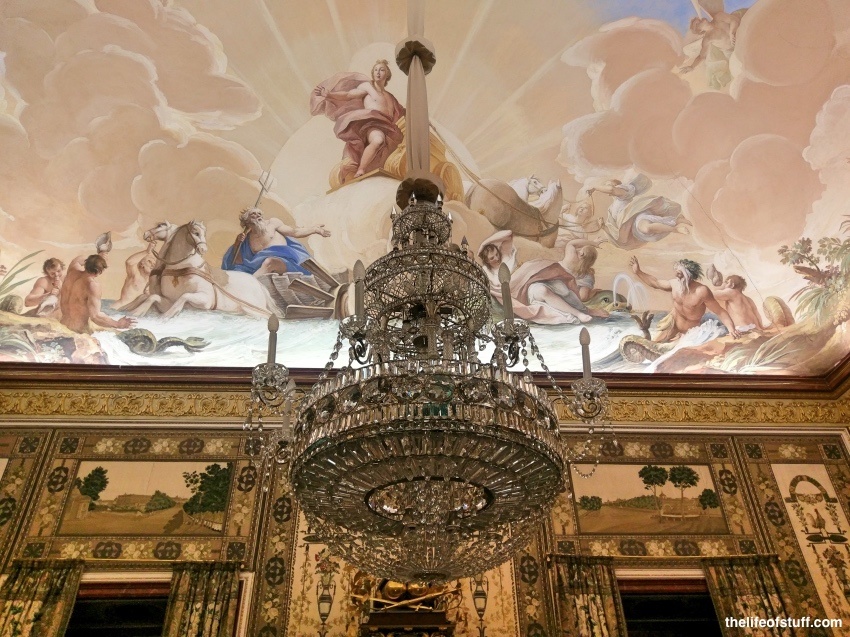 The rooms inside the palace were designed by Dugourc and it is said that they exhibit some of the most impressive examples of neoclassical art found today.

Tickets and information can be found at the Aranjuez Tourism website here. 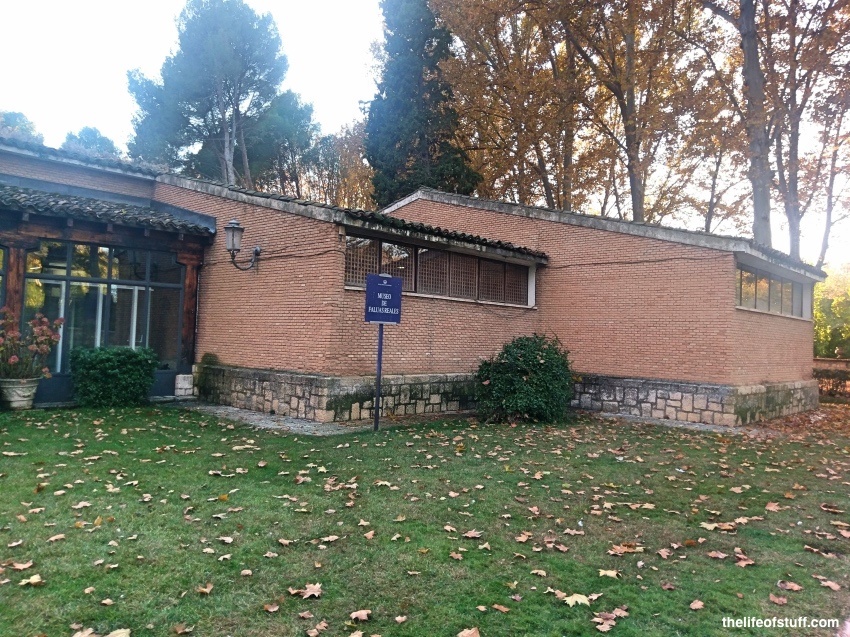 Built within the Jardin del Principe (Garden of the Prince), this Museum of Royal Barges which was rebuilt in 1966 is home to an impressive collection of beautiful boats/barges owned and used by a number of the Kings of Spain down through the ages.

These beautifully designed and ornate boats and barges were used to cruise the nearby River Tagus and even sail the Sea of ​​Ontígola.

Tickets for this museum along with the other museums can be purchased at the ticket offices of the Royal Palace or through its website here.

Walk around the Jardin del Principe 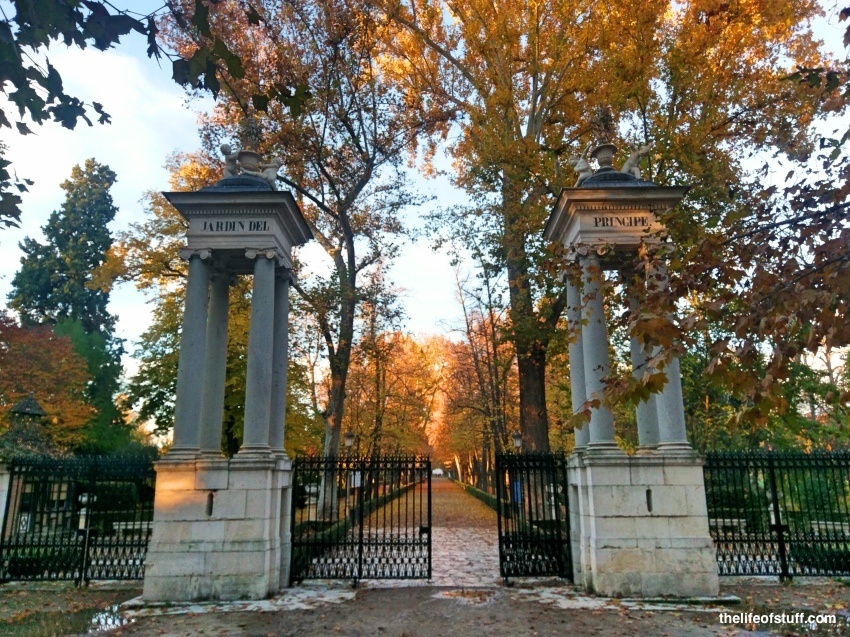 Found alongside the River Tagus and next to the Royal Palace, The Prince’s Garden of Aranjuez, at 150 hectares is one of the largest gardens in Spain.

Inside it you’ll find manicured lawns, matured trees, flowers and fauna, fountains, a pond with an Oriental pavilion, the aforementioned museums and more.

The gardens are free to enter and a walk through them is sure to awaken your earthly senses. I visited during Autumn and the colours of the fallen leaves and wintery sun as it played through the trees was magical. The most colourful time to visit is Spring/Summer. 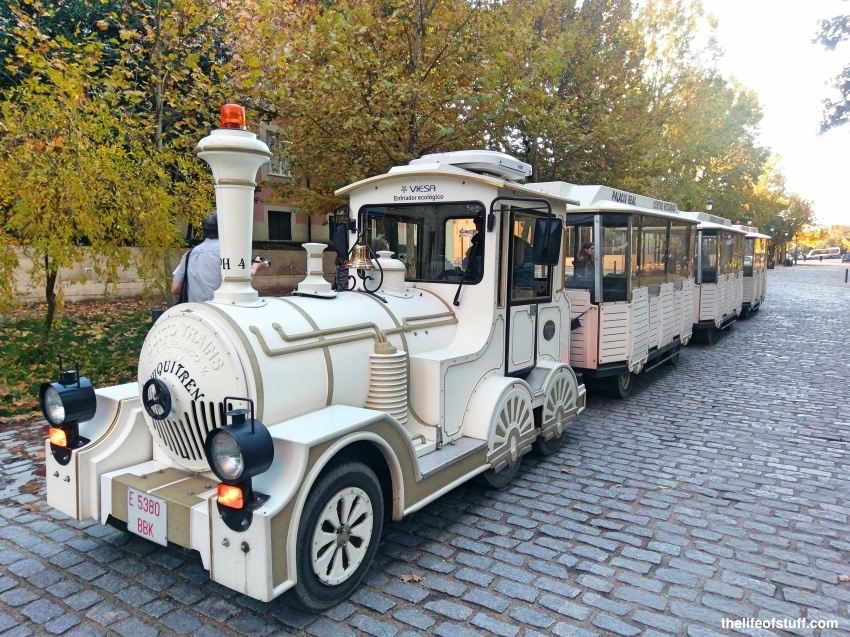 The Tourist Train ‘Chiquitrén’ is a great way to get a feel of Aranjuez and the Prince’s Garden.

This family friendly train ride that takes approximately 50 mins and costs €5.50 per adult (Children are €3) visits the Prince’s Garden as well as Historic Quarter.

For more information and to book visit the AranTour website here. 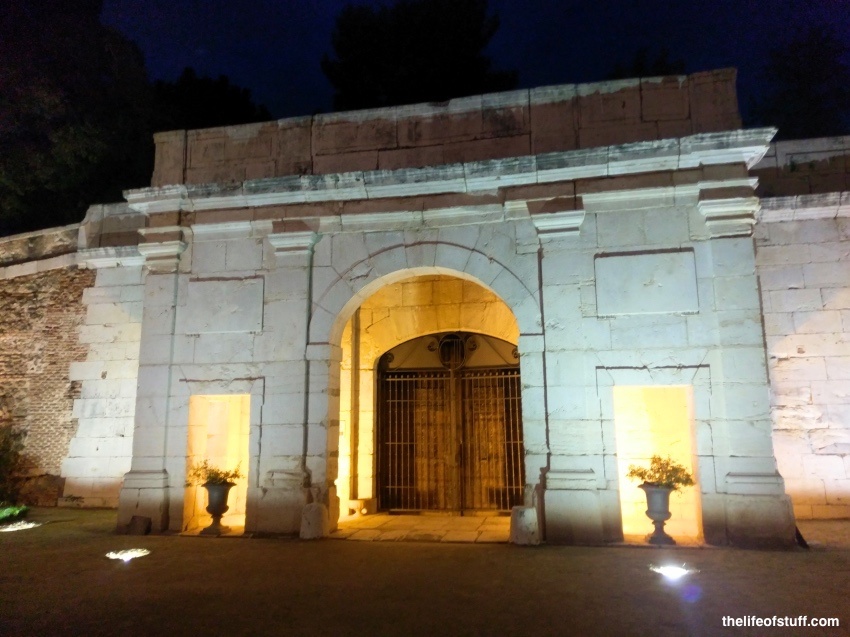 No trip to Spain could be complete without a sip of Spanish Wine, and for those interested in the history of the wine, or perhaps just the taste of it, then Aranjuez steps up to the mark with its very own regal winery, the Charles III Regal Winery.

The winery was born in 1766 when Charles III ordered for it to be built to provide both wine and oil for the Royal Palace of Aranjuez using the produce from the Kings farm “Finca del Rey”.

Tours and tastings are available. There is a store for purchasing the wine directly, plus there are lots of photo opportunities that explain the winery’s aging process. As one of the winery’s motto’s goes ‘Live History, Live Wine’.

For more information and to book visit the Real Cortijo website here.

Aranjuez is not going to disappoint food-wise, with restaurants and eateries to suit most tastes and budgets.

This family run Michelin guide restaurant, Casa José, found in the ‘down town’ area of Aranjuez was a very enjoyable experience. The open plan layout of the casual style eating downstairs was perfect for our daytime dining (Upstairs appeared to be more of a formal affair).

The dishes served were made from locally sourced produce and were inspired by traditional Spanish recipes.

For more information and to book visit the Casa José website here. 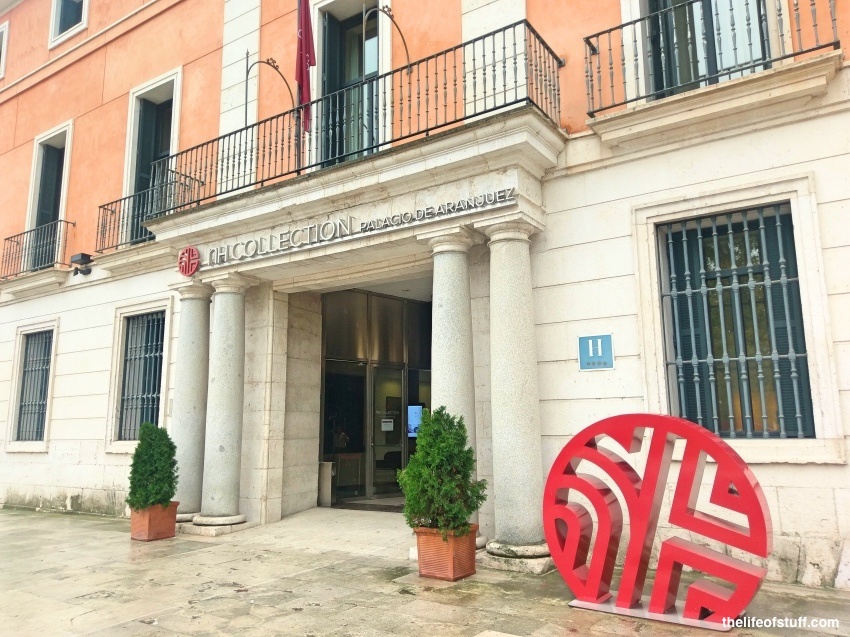 Hotel NH Collection Palacio de Aranjuez is a luxury four star hotel that’s so well situated in Aranjuez that it offers guests the opportunity to wake up to views of the Royal Palace from metres away.

The lobby area was spacious and modern with an atrium that allowed for a courtyard style feature of the area to be lit up by natural light. The three course meal I dined on the night I stayed was enjoyable and breakfast helped set me up for the day. The reception and dining staff I met were friendly and courteous.

I loved my room with its beautiful floor to ceiling balconied windows. The wardrobe area, bedroom area and bathroom were all luxuriously spacious. The extras like the in-house magazine, nespresso machine, robes, slippers and toiletries all added to the experience. 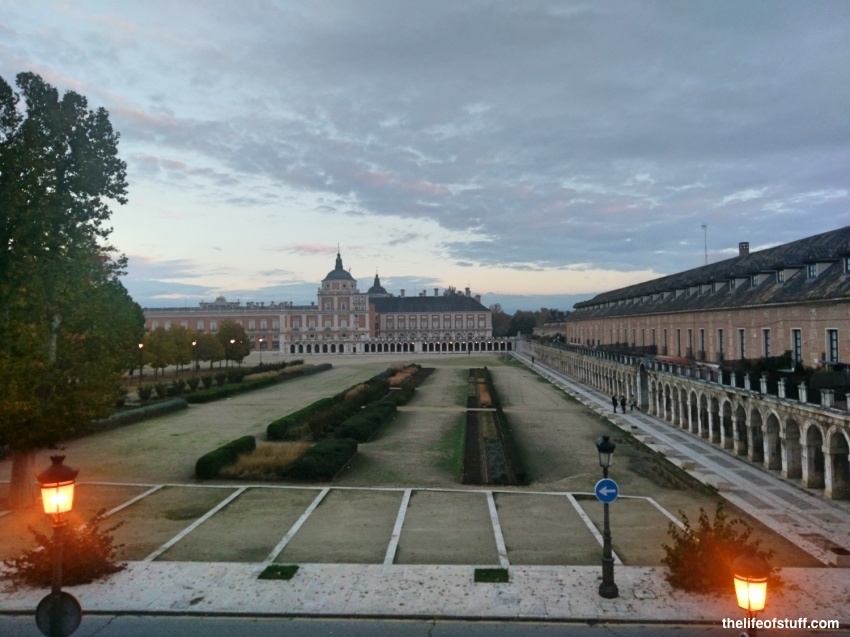 However it was waking up to this view that made my stay unforgettable.

Thank you to the Spanish Tourism Board Ireland for including me on this wonderful trip. 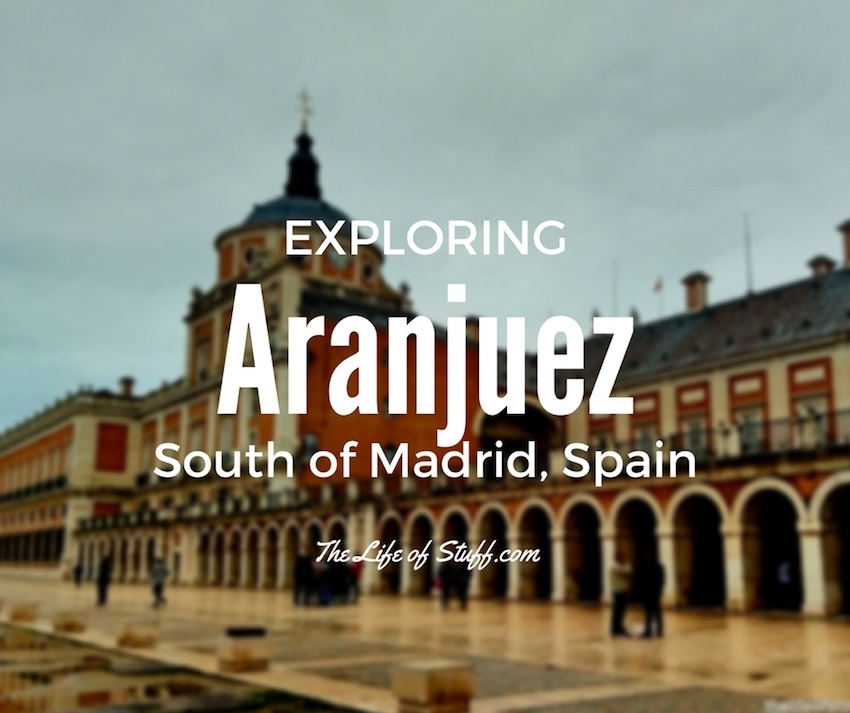 Win Dinner for Two with Cocktails at Citron Restaurant Dublin