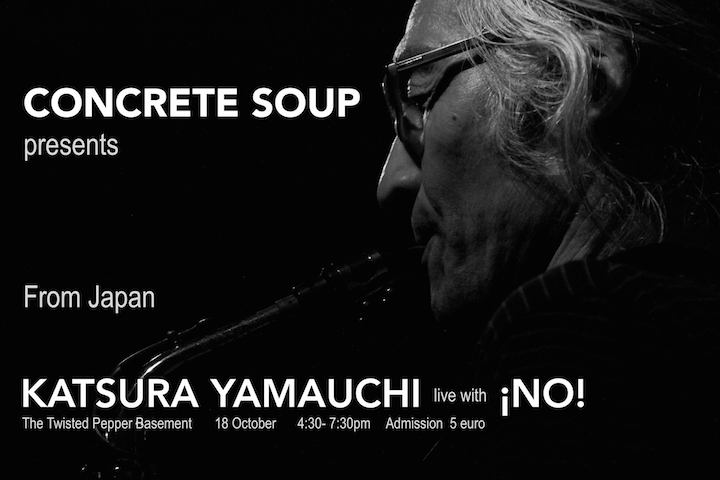 The title to this blog ‘Concrete Soup at the Twisted Pepper‘ could have you reading for a really bad review on some terribly bad thick soup but you’d be fooled dear reader, you’d be fooled BIG TIME because this blog is all about Dublin’s UNDERGROUND New Psych Music … you didn’t see that coming did you!

How about something that is so underground it ACTUALLY HAPPENS UNDERGROUND?? From the black deeps of the Twisted Pepper Basement, the 3rdSaturday afternoon of every month, Concrete Soup has been bringing together international, national and local avant-garde musicians of all colours and stripes for nigh on a year now. Hosted by new psychedelic improvisers ¡NO!, Concrete Soup features a monthly guest and fuels itself on wailing walls of guitars, space jazz bass, brain bending keys, stair collapse drums, nuclear winter clarinet, high wire sax and generally mutant noise. Oh, and it’s often washed down with heavily psychedelic visuals. If you have a penchant for a mash-up of the styles of Can, Pere Ubu, Captain Beefheart, Sun Ra, 70s Miles or early Sonic Youth, this will fix you nicely. (courtesy of Concrete Soup)

October’s Concrete Soup will feature internationally acclaimed Japanese minimalist saxophonist Katsura Yamauchi. Katsura will play a solo set as well as a collaborative set with hosts ¡NO! … and if that’s not enough to mark this into your weekend and put a jig in yer step … to celebrate Katsura Yamauchi’s final European performance and his first Dublin performance, after the final set with ¡NO! – he will give a special screening of his new film HoFuNeM (approx 40 minutes).

So here are the details:

Katsura Yamauchi is an avant-garde minimalist saxophonist from Beppo, Japan. He has regularly toured Japan, Europe and the US, and has performed with Han Bennink, Michel Doneda and Barre Philips, among others.

“Katsura Yamauchi is really both a new and a veteran artist… I am greatly refreshed by his energetic and confident performance.” – Otomo Yoshihide, July 2003