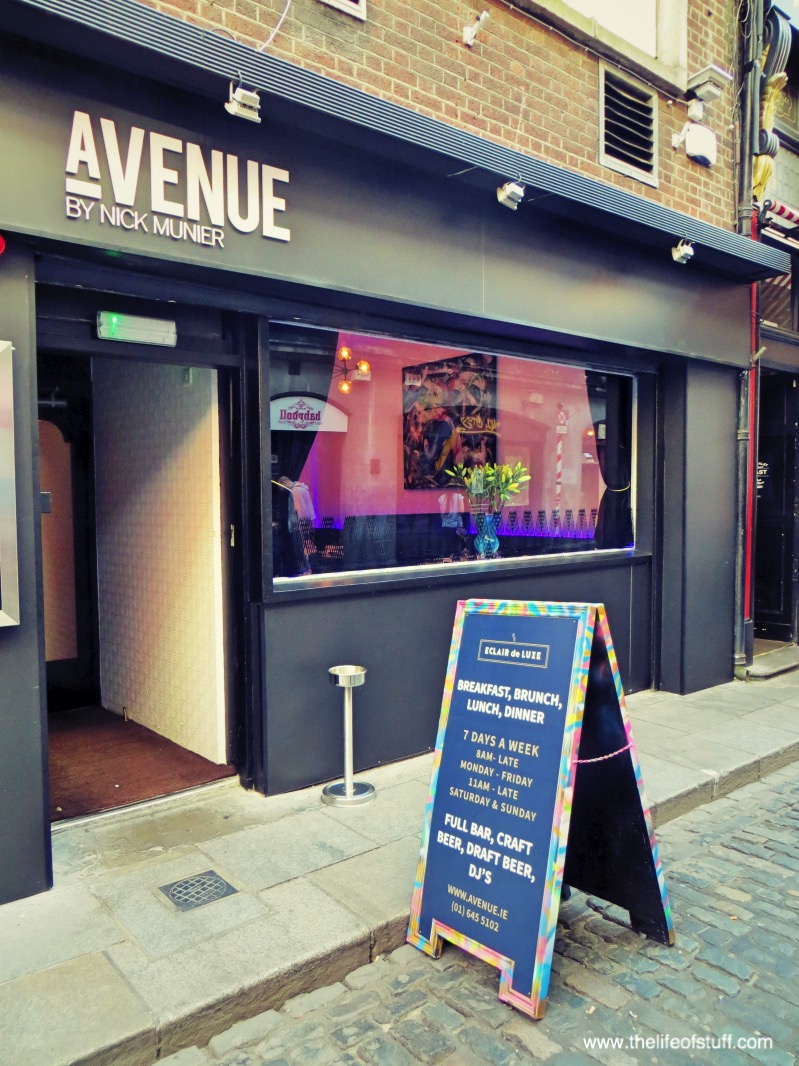 After taste of Dublin a few Sunday’s ago, Patrick and I found ourselves in Dublin City with a thirst for a cocktail and a hunger for something … and to quote Goldilocks … not too big, not too small but just right. Of course I’d heard about Nick Munier’s latest venture – a venue called Avenue, well it’s actually called Munier at Avenue … so it was in my mind to head there but we were too late for their lunch service and too early for their late service. However I fretted not because we were in great time for the all day service in Avenue’s second restaurant Eclair de Luxe at Avenue.

Checking in with the host on the ground floor, home to Munier at Avenue, we were guided up the stairs to Eclair de Luxe. There we were greeted with a smile by a friendly waitress, barman and non other than Mr Munier himself. (I was going to ask for a photo but he was in company and it’s not really my style).

The place was really quiet customer-wise giving me the perfect opportunity to take photo’s – the reason for the lack of customers could have been a number of reasons – a strange time to dine, the aforementioned taste of Dublin or maybe it just hadn’t caught on yet … and I say yet, plus a lot can happen in a few weeks.

Decked out to a very high spec, the restaurant was spotless and like a plush diner … it had neutral coloured walls that included tiled feature walls. Others were adorned with fun black and white framed photographs of Nick and his children. The furniture was black and white and included booths, I love booths. The bar looked full and inviting, and had a tasteful neon light and high stools, perfect for a busy night.

We chose a booth to sit in, of course, and were waited on by a waitress who came across genuinely friendly, and following my handful of questions she proudly informed us that Eclair had only opened its doors a couple of weeks beforehand. She had witnessed its transformation and seemed very excited about the dining experience Mr Munier had created.

Next up and it was some light bites, as we had already nibbled our way around the Iveagh Gardens. We decided on the Grilled Calamari with Dips (€9.50) and the Pissaladière (chargrilled French pizza with a tomato and cheese topping) for two with Shredded Duck and Rocket (€16.50). I loved both. The calamari was uniquely presented and I loved the fact that using the dips was like breading your own. The pissaladière was really tasty and the combination of the generously portioned duck and rocket really hit the spot.

When it came to pay we used their new and very techy ‘Wireless Waiter’ … I think we were one of the first to try it and it worked a treat. I’d say it’ll be handy on busy nights – once in the right hands.

I’m looking forward to returning to Nick Munier’s foodie empire again. I look forward to dining in Munier at Avenue and testing out their basement cocktail bar, the Cîroc Lounge. Maybe it’ll be breakfast in Eclair, dinner at Munier and drinks in the Cîroc Lounge … sure I might even throw on a frock for the occasion!

Brunch at The Old Yard Castledermot, Dining Outdoors in Kildare