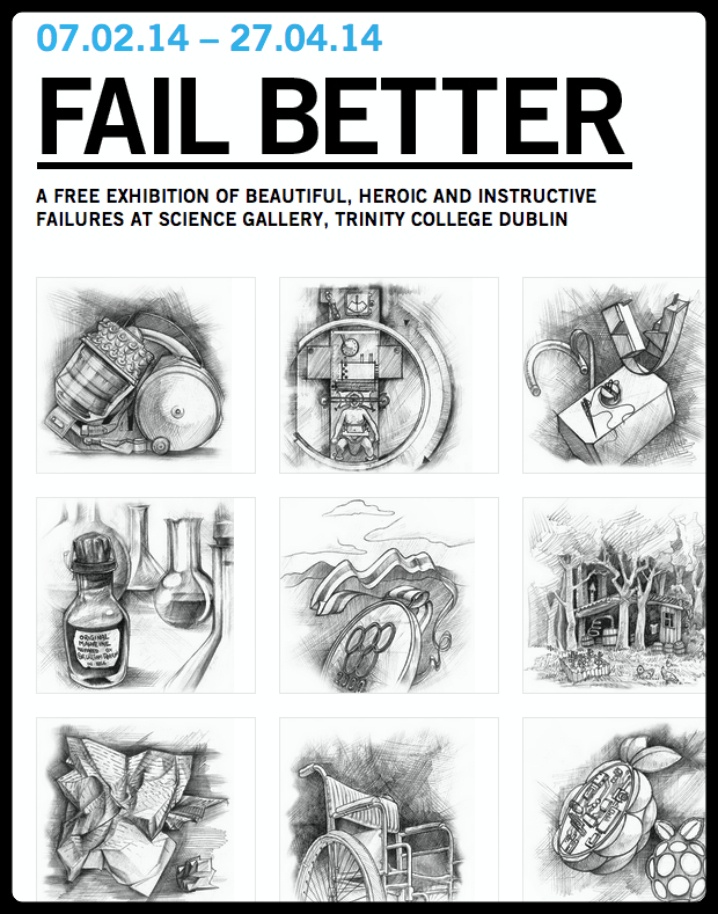 The Science Gallery are back, well they never went away, with another fantastic exhibition, this time focusing on Failure and the creative learning that is gained from it.

The goal of FAIL BETTER is to open up a public conversation about failure, particularly the instructive role of failure, as it relates to very different areas of human endeavour. Rather than simply celebrating failure, which can come at great human, environmental and economic cost, we want to open up a debate on the role of failure in stimulating creativity: in learning, in science, engineering and design.

The Fail Better exhibition kicked into action at the beginning of last month when the launch party provided guests with the first glimpse of the exhibition, got to taste Michelin-starred chef Kevin Thornton’s ‘failed recipes’, were encouraged to screen-print their own posters, and listened to some of music’s finest failures and one-hit wonders. Since then the Fail Better Exhibition has been joined by Sonia O’Sullivan who talked about failing better in sport, Fail Better contributor Mark Pollock who stood and walked using his Ekso Bionics Robotic Exoskeleton and hundreds & hundreds of failures who have enjoyed sharing their experiences. To give you a clearer picture of what the exhibition is all about … have a goo of this …

As well as the exhibition itself which runs until April 27th, there are lots of talks, comedy and special guests lined up but the FAIL BIG is the one to get your name in the pot for. It takes place on Friday March 28th 7pm-10pm and will be the first in the Science Galleries experimental new late night event series and from what I’ve read about it, they are going all out for it with a load of live music and activities including experiments, workshops, talks, plays and games with the motto for the night being …

The best thing about this FAIL BIG event is that it’s FREE and all you need to do to get tickets is sign up here and register … If you do I might just see you there!

Bevvy of the Week - Kentucky Bourbon Barrel Stout and Ale