You’ll find Kells Augustinian Priory about a kilometre from the village of Kells in Kellsborough, Co. Kilkenny. If you’re driving from Kilkenny City, the most direct route is only 15km, and it should take less than 20 minutes.

There are a number of reasons you should add Kells Priory to your list of places to visit. From escaping the bustle of life, to brushing up on your knowledge of Irish history – Kells Priory is one of the most impressive Augustinian priories in Ireland. Or perhaps you just like getting outdoors and visiting interesting places. For me and my family, we just love the excitement and simplicity of exploring, learning as we go, times past and present on this beautiful Island of Ireland. 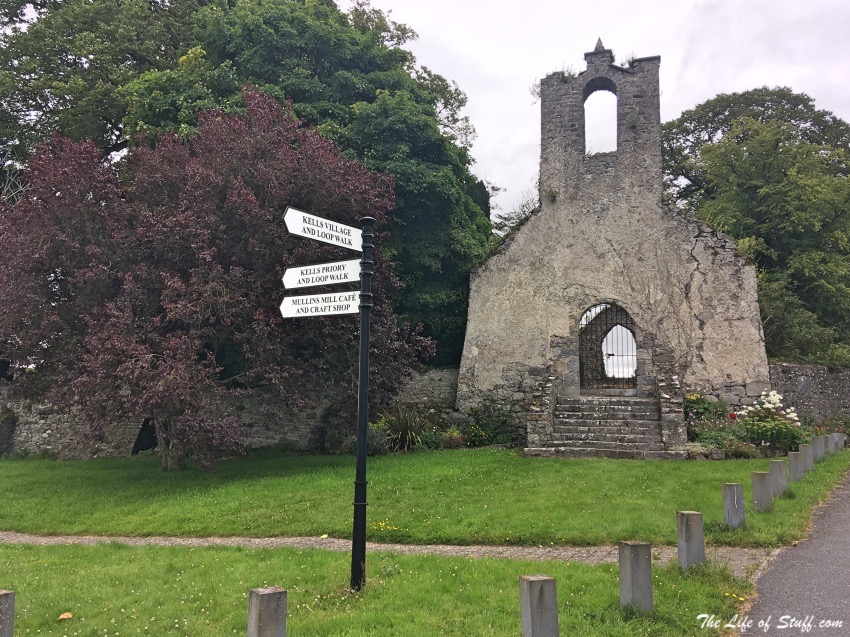 If you are driving, you’ll most likely park at Kells Priory Carpark (Google Coordinates: 52.536798, -7.268278). Here you’ll be greeted by the ruins of St. Kieran’s Church. According to the National Inventory of Architectural Heritage historic records indicate that ‘a pre-Norman Catholic church was built on the grounds prior to the establishment of Kells Priory in the twelfth century’ and ‘following the dissolution of the priory by Henry VIII (1491-1547) in 1540 the present structure was re-adapted as a Church of Ireland place of worship until superseded in 1844’

You can’t enter St Kieran’s Church but you can climb the steps up to the locked gate and peep through. We visited on a rainy day in July, when the grass and trees looked shiny and green. But even then the colours and texture of the ground inside the church felt like Autumn. 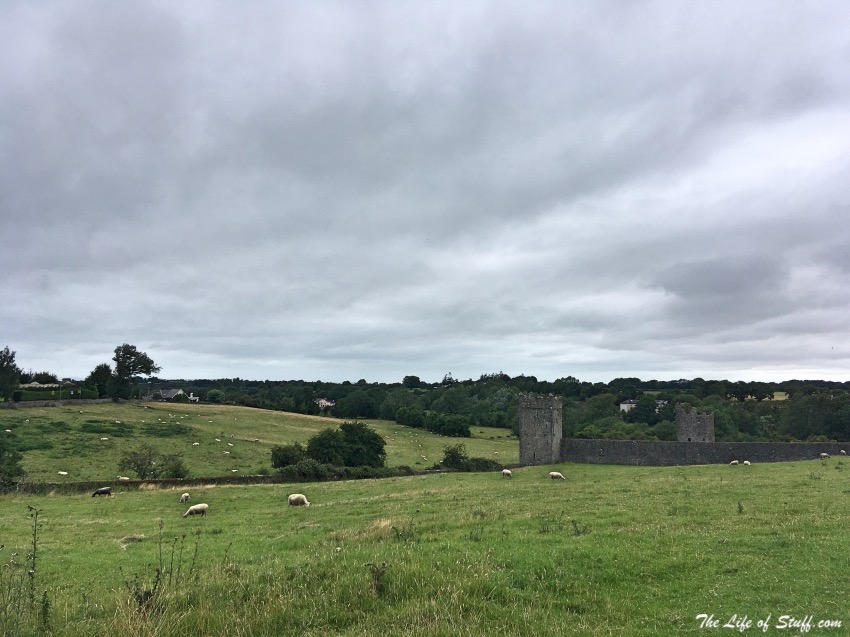 There’s about 500 metres of grass, sheep and sheep shite between the carpark and the priory, so wear suitable footwear and watch your step if you can. The rain cleared the sheep from the grasslands just as we ventured across. And for a moment I was transfixed on their single file coordination as they came together and crossed the field finding shelter under the trees beyond.

We ate our picnic in the car the day we visited but there is a picnic table on the grassy lawn next to the carpark, should the sun shine for you. At the carpark, you’ll also find a map of the area, along with details of a clever self-guiding app that can be accessed via your smartphone.

Something to Note: The entrance to the aforementioned field is a turnstile, so be aware of this for suitability.

Kellys Priory rises from the ground like a castle, in fact Heritage Ireland states that the priory’s local name, is the ‘Seven Castles of Kells’. This castle-like appearance is down to its medieval defence structure of a surrounding high wall with towers. High and strong enough to last centuries. After all a monastery of this size and wealth needed to be fortified.

And on that note our two explores couldn’t wait to get a closer look, imagining themselves as knights, dodging arrows, from the slit windows of the towers that towered above us. 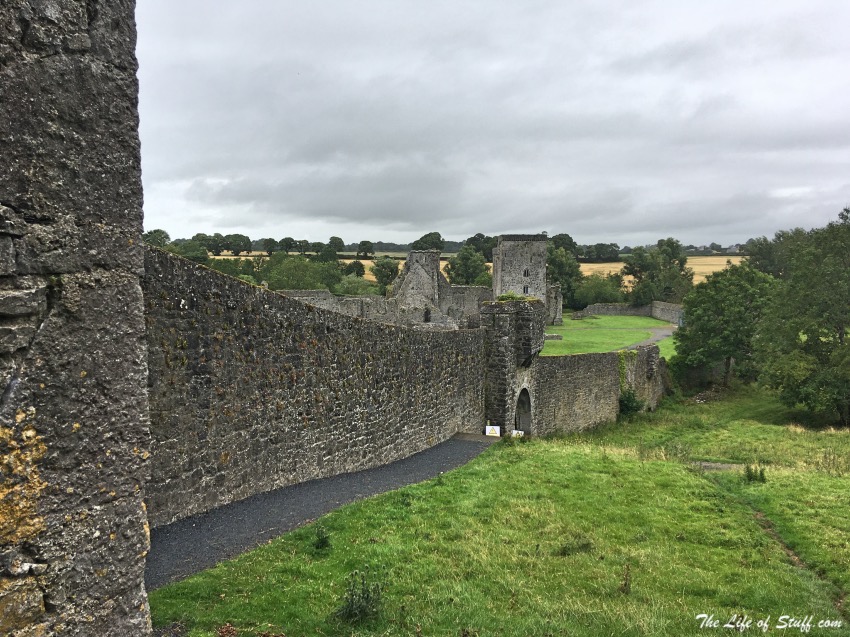 The pathway to the main entrance of the priory is secure but does have steps, so keep this in mind.

Once inside the stone walls, the priory unfolds in front of you. And this magnificent piece of history that was built between the 13th and 15th century, showcases the marriage of religious and military architecture during medieval times. 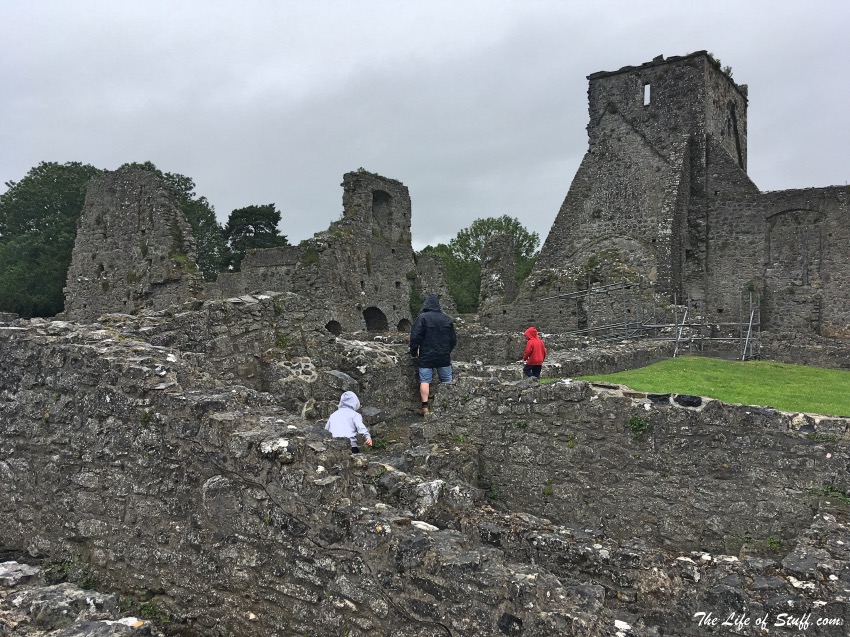 Layers of history, in beautiful ruins. To climb over, walk on, marvel at and appreciate. A nave and chancel. The lady chapel and cloister. The infirmary, workshops and kitchen.

Monastic.ie have a great article on Kells Augustinian Priory – where they describe the history of the site, along with the people associated it. From its birth by founder, Anglo-Norman knight Geoffrey Fitzrobert in 1193, to its demise in 1540 – and all the trouble in between. 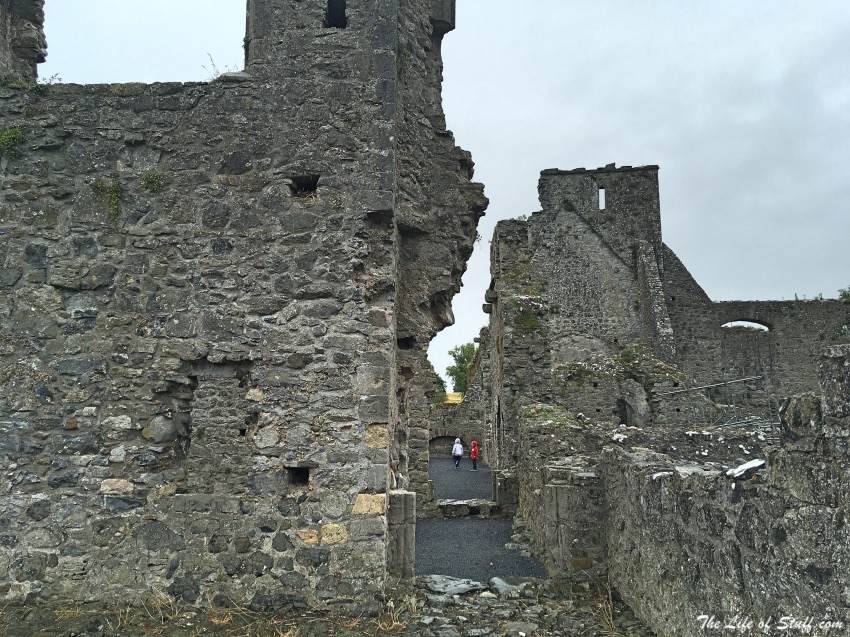 Since 1893, Kells Priory has been a National Monument, under the guardianship of the Commissioners of Public Works.

In the 1970’s extensive excavations were carried out by the Office of Public Works. ANd since then, over the years, conservation work has been carried out – in fact the day we visited work was being carried out on one of the towers of the defence wall. 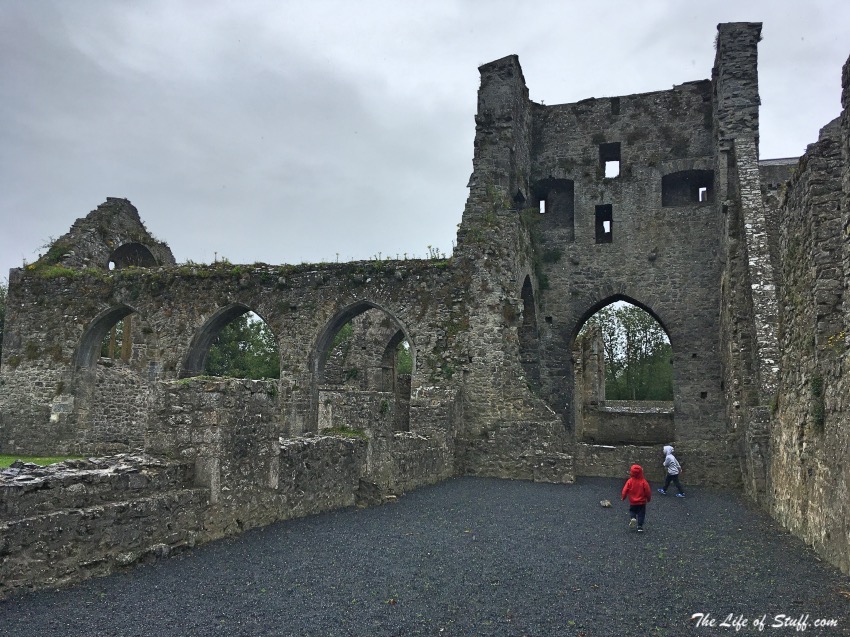 The section of the priory in the photo above and those below is known as the ‘North transept and crossing tower’ and I got this information from research.

Like anything in this world, information is readily available if you know where to look. But it can take some time. This brings me onto signage at Kells Priory – unfortunately it’s non-existent. 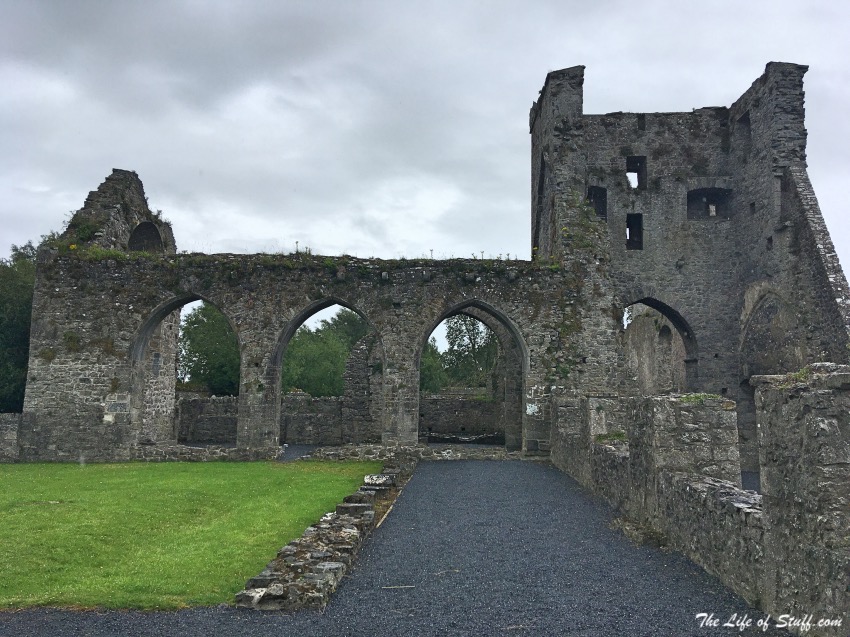 And although I did try out the aforementioned ‘interactive guide’, unfortunately it wasn’t suitable for me – instead I chased two exploring preschoolers amongst the ruins.

I would love to see information boards around the site with simple details describing each area, and perhaps insight into why things exist the way they do today. For example these locked away stones – are they magic? 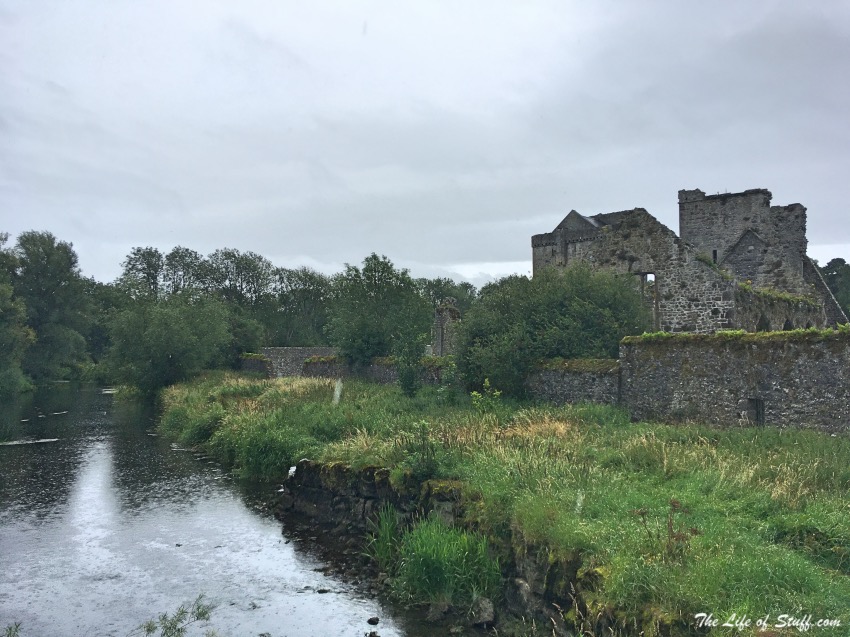 When we visited we took a walk outside the defence walls to the bridge over Kings River – on our next visit we’ll be prepared for rain and take a river walk too.

Kellys Priory is full of medieval charm and character. In fact despite its strong and guarded appearance it’s actually quite romantic, and picturesque too. Basically I’d live there if they could get a roof on it! 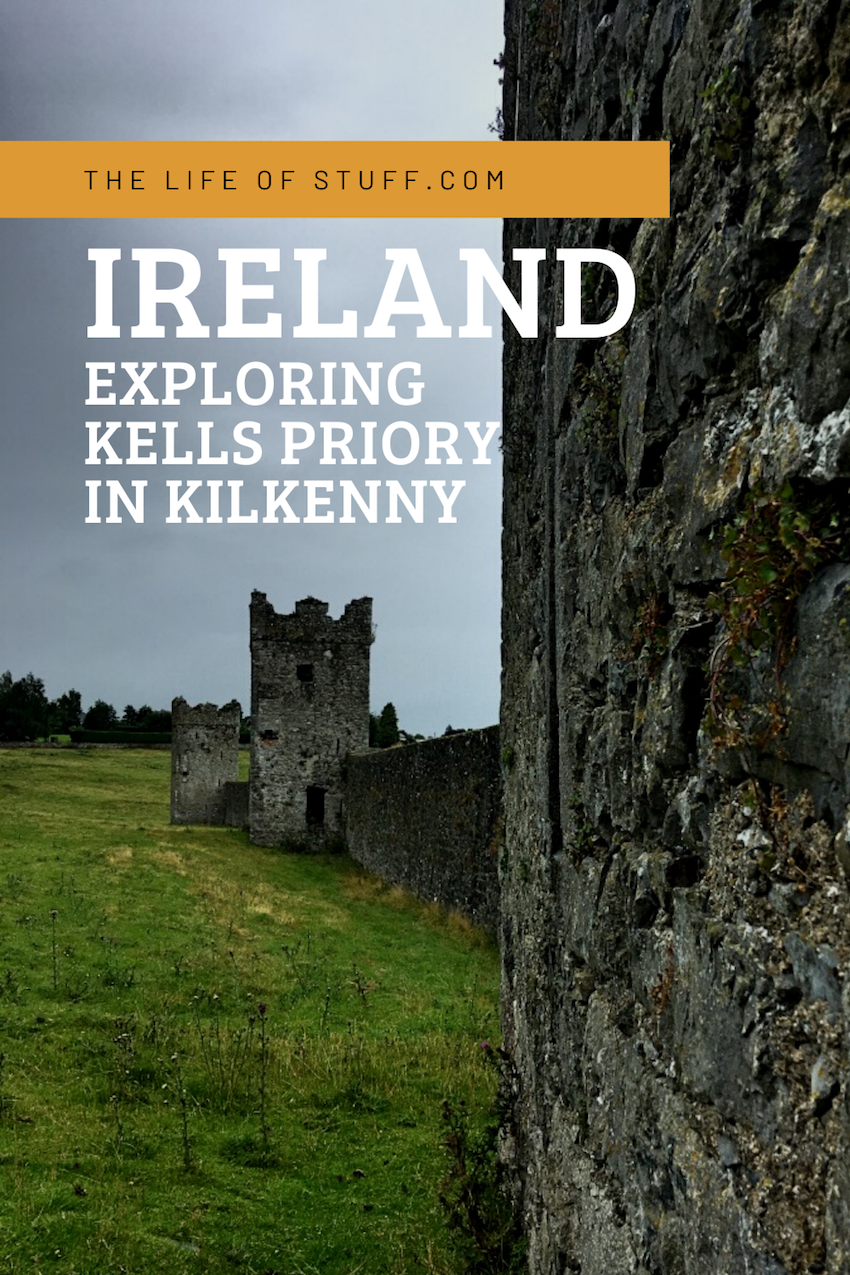 15 Fantastic Designers and Makers Based in Kildare, Ireland