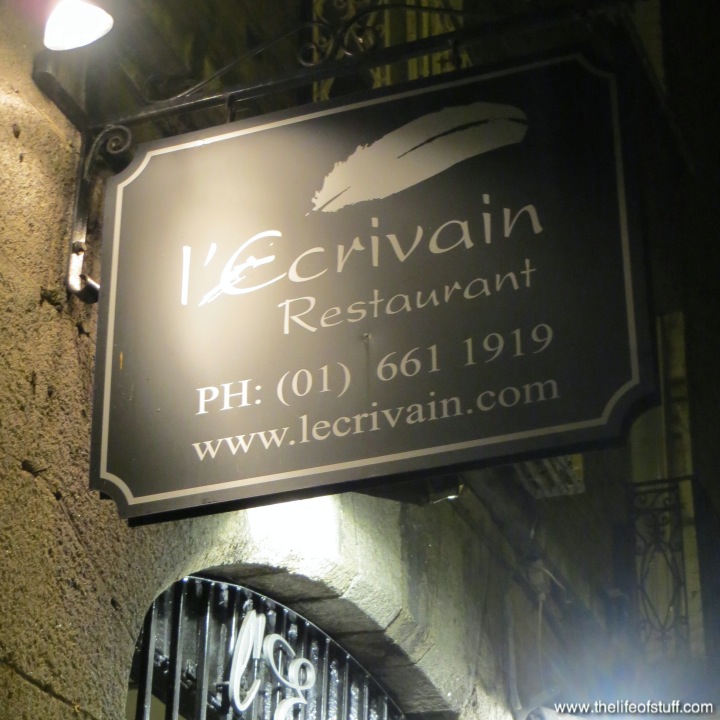 Up until last week I hadn’t dined at L’Ecrivain. Being a multi-award winning Michelin Starred Restaurant in the heart of Dublin, I was looking forward to going and wondered how it had taken up until then to plan a visit. On the other hand I’ve only dined in Michelin Starred restaurants a handful of times in my life both here in Ireland and in France. The plan is to develop my Michelin Star experience and dining at L’Ecrivain, I hoped would be the kick start to a great 2014 dining year. Looking at the ups and downs of Michelin Starred Restaurants in Ireland over the years it is evident that it’s not an easy feat to be awarded the coveted star not alone keep it. L’Ecrivain have kept theirs since they were awarded it over 10 years ago and as we arrived at the restaurant I was about to find out why. 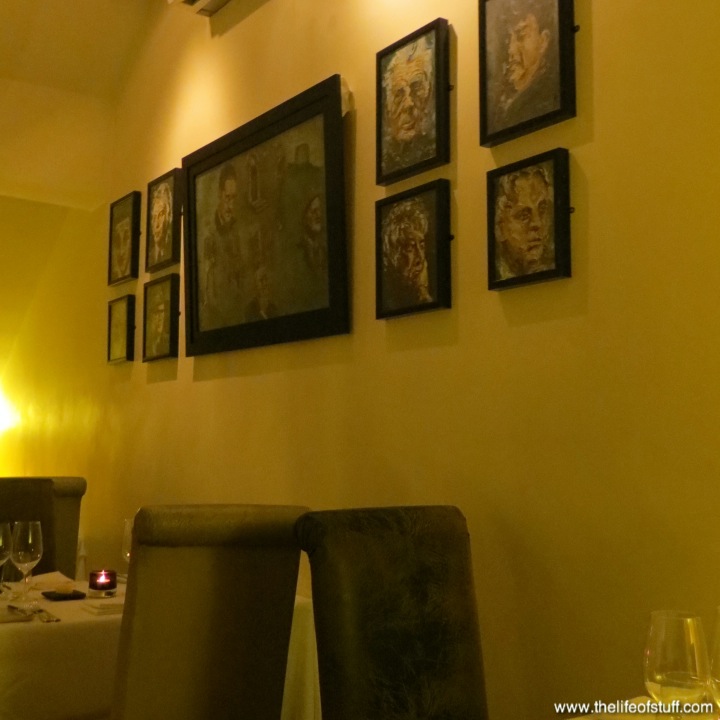 The entrance to the restaurant is simple with bay trees and wall mounted menu. The many plaques that adorn the wall beside the entrance and aren’t overly highlighted, making me think that your experience inside should speak for itself. Once inside we were greeted by a smiling hostess who took our reservation name and coats. We were on time, so had no need to sit at the bar which is located near the entrance and were shown to our table. We dined mid-week and the restaurant was bustling with a mixture of diners. Those in suits who had arrived after work or were still at work and those not suited but who were decently attired like Patrick and I. Sure you have to make a bit of an effort when dining in style. 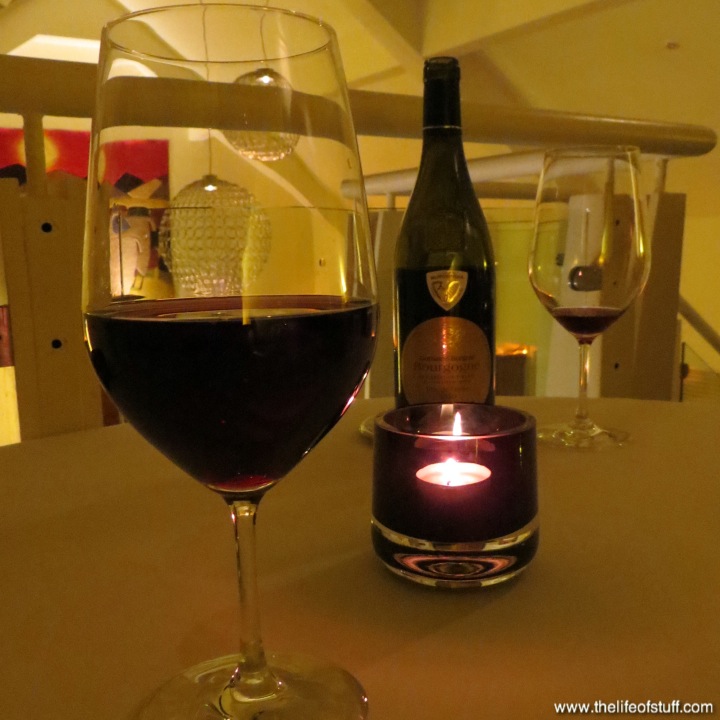 The restaurant is minimalist but warm. The tables are well spaced out. The table clothes a clean and crisp. The table tops have a slight padding which makes them very comfortable when etiquette goes out the window and your elbows hit the cloth. Our menus were brought to us, one for food and one for wine. We were there for the Six Course Tasting Dinner Menu which is priced at an impressive €65.00 inclusive of an Amuse Bouche, Starter, Palate Cleanser, Main, Dessert and Tea/Coffee & Petit Fours. Our waiter was friendly and attentive. He expressed his knowledge as we enquired about wine to accompany the dishes on the menu. We were off to a good start and with our choice of starters and mains we chose a Burgundy Pinot Noir which was €50 for the bottle. 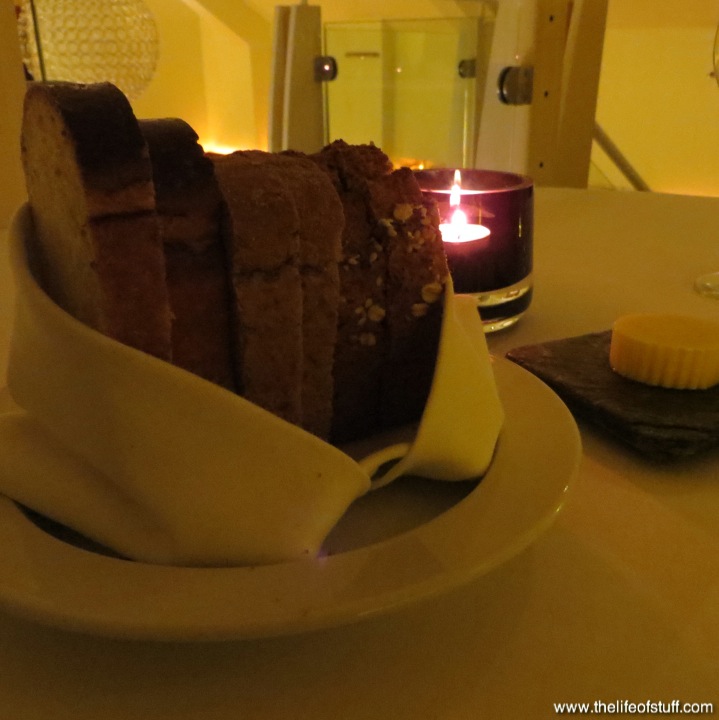 Following the arrival of deliciously fresh bread of different flavours the Amuse Bouche was simple and light. A shot glass of delicately shredded crabmeat under a foamy melt on the tongue mouse.  For Starters there was a choice between Cured Salmon – Heirloom Beetroots, Pickled Cucumber, Orange Horseradish Mayonnaise and Rabbit Loin – Bacon & Leek Farce, Confit Leg Tortellino, Lentil Ragout and Parsley Root Purée. We both chose the rabbit. The meat was succulent, the bacon complimented and didn’t overpower, just the right amount of purée. The perfect amount of meat. It looked fantastic on the plate. 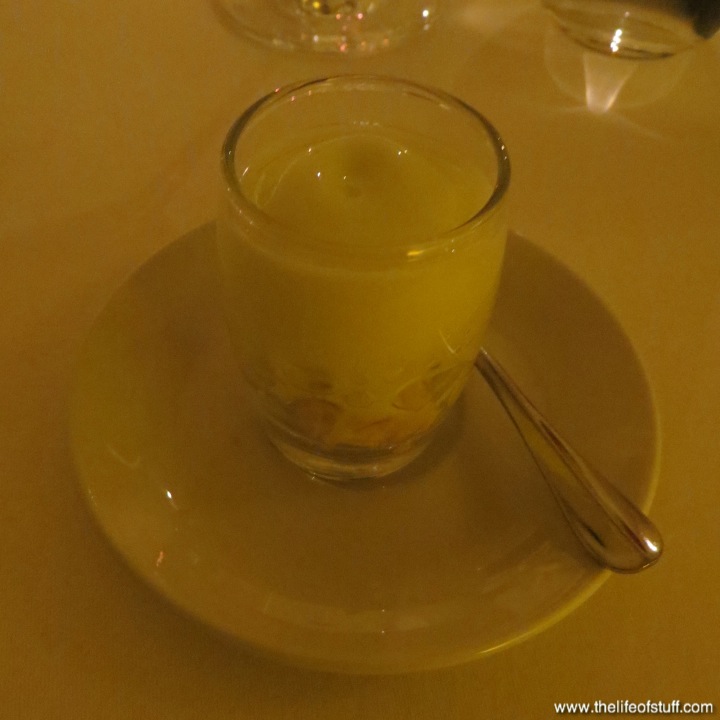 For the palate cleanser, we were treated to what I can only describe as a creamy sorbet in lemonade, which reminded me of an ice-cream float. It was light, with sweetness and bitterness, cleansing our palates at the same time. 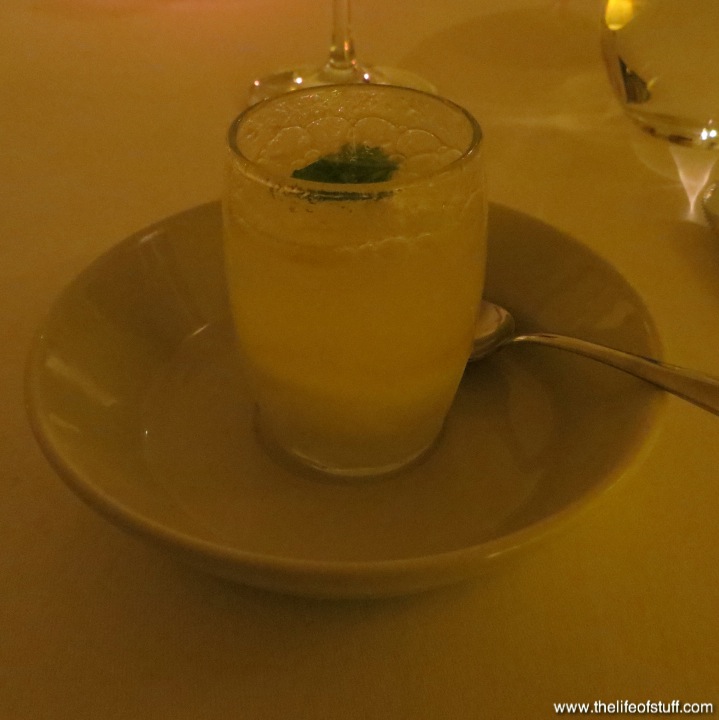 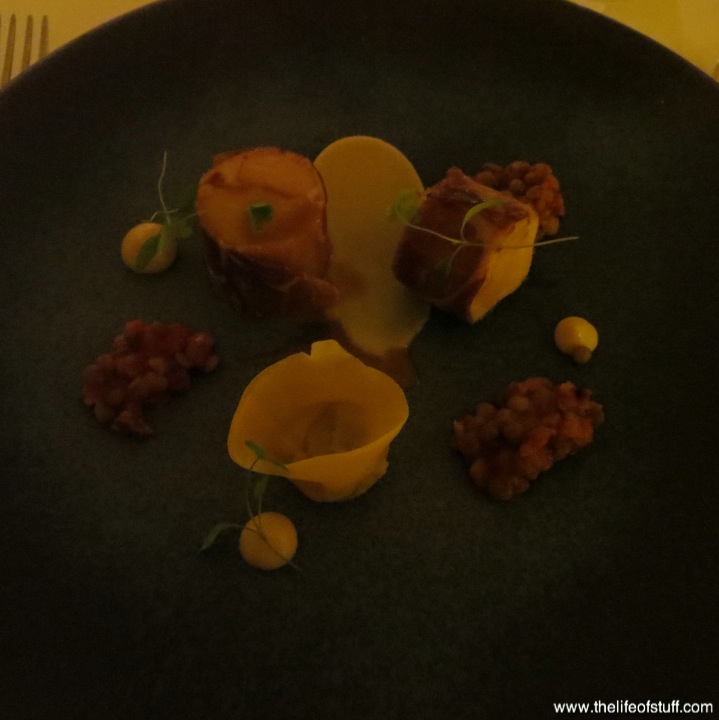 For our choice of main we were offered Cod – Cauliflower Purée, Mussels, Chick Pea, Squid, Caper Berries and Smoked Cherry Tomatoes and Rare Breed Pork Belly – Carrot & Mustard Purée, Gnocchi, Date, Confit Carrots and Sauerkraut. Patrick chose the Cod, I chose the Rare Breed Pork Belly and although both were delicious, I revelled in my choice and Patrick looked somewhat jealous of it. Patrick’s choice included a fine hefty piece of Cod with a crispy crust, piled on the pretty and tasty concoction of mussels, chick peas, squid, berries and tomatoes. The Cauliflower purée dotted around the main focus of cod added another dimension to the dish. My Pork Belly dish looked and tasted fantastic. All squares, cylinders and circles. It arrived as a square crispy skinned scrumptious piece of pork, surrounded by the tastiest cylinder in shape gnocchi I’ve tried to date. The rectangular black pudding, circular confit of carrot and diamond shaped date complimented every bite as I tried to include a piece of every taste on my plate with each forkful. Included with our mains was a small saucepan of baby potatoes and the fact that they weren’t finished entirely tells you something about the satisfaction we felt from our main meals. 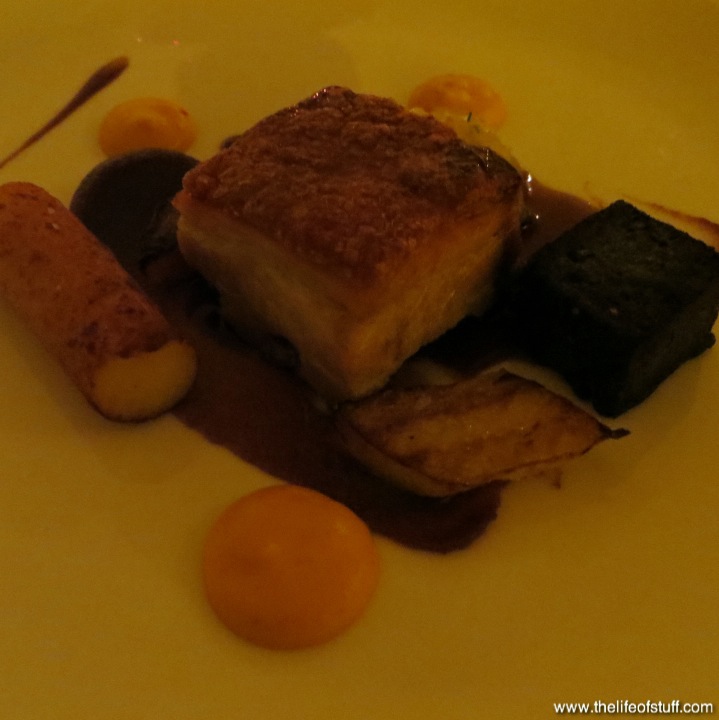 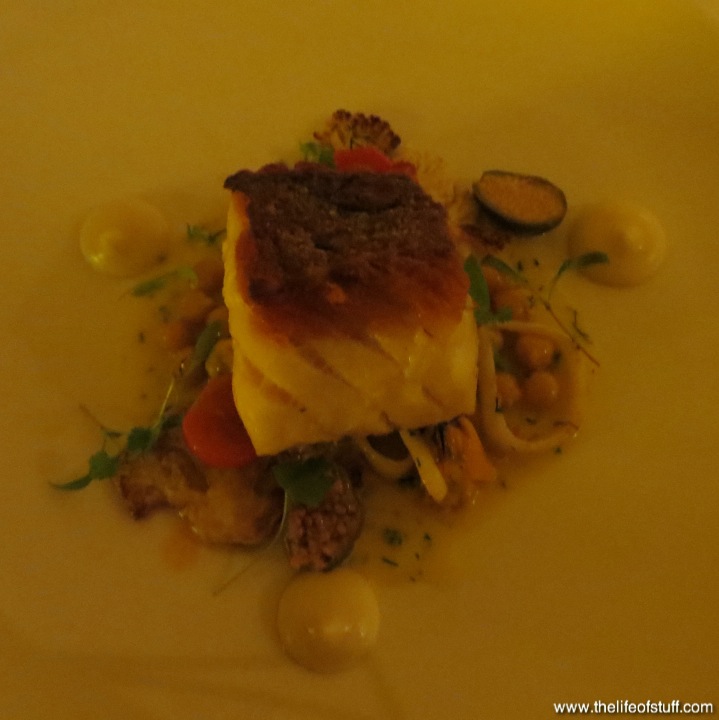 For dessert Patrick chose the Chocolate Cherry and Almond Warm Brownie – Cherry Ice-cream, Crème de Cacao Jelly and Cherry Jus. I chose the Salted Caramel Mouse Pickled Apples – Cinnamon Crumble, Clotted Cream and Apple Sorbet. Again Patrick really enjoyed his selection, it looked impressive when it was placed before him and he did lick his lips when finished, however as with the main meal I did see a glint in his eyes when he saw and tasted my choice of dessert which I have to say was incredible. From it’s placement on the plate, everything about it was perfect. From the mouse to the cinnamon crumble, clotted cream to the sorbet, it really was a  little bit of dessert heaven. 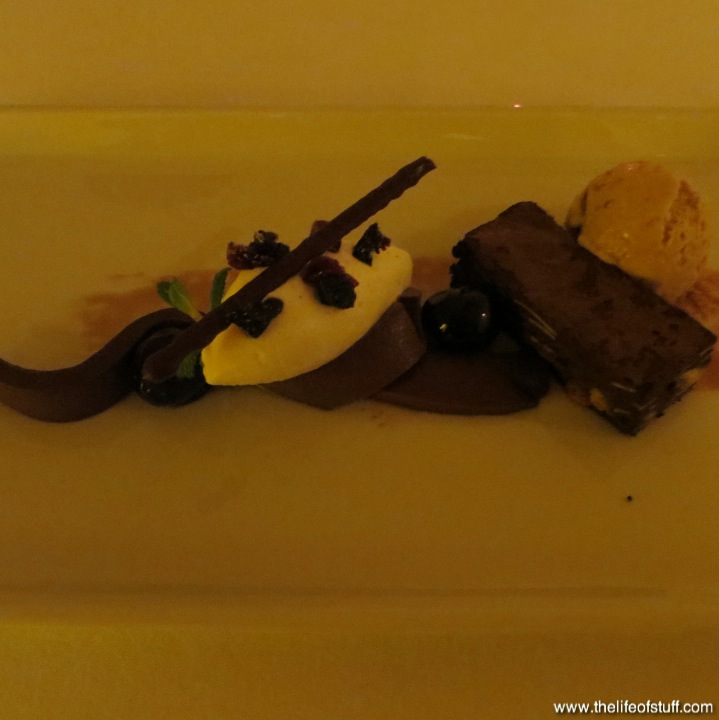 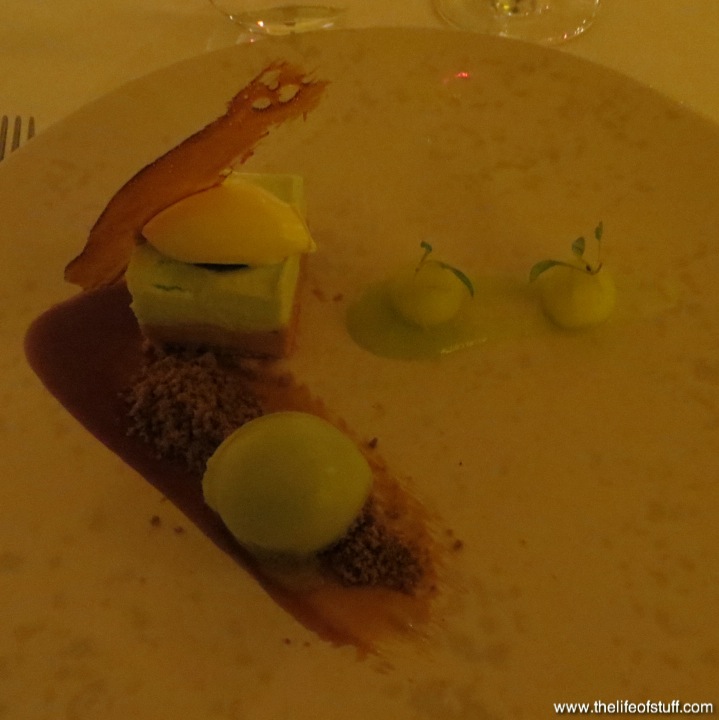 Following the last drop of our wine, we ordered double shot espressos each and were presented with our petit fours, which were lollipops of loveliness, chocolatey, fudgy, dark and white, soft and crunchy. 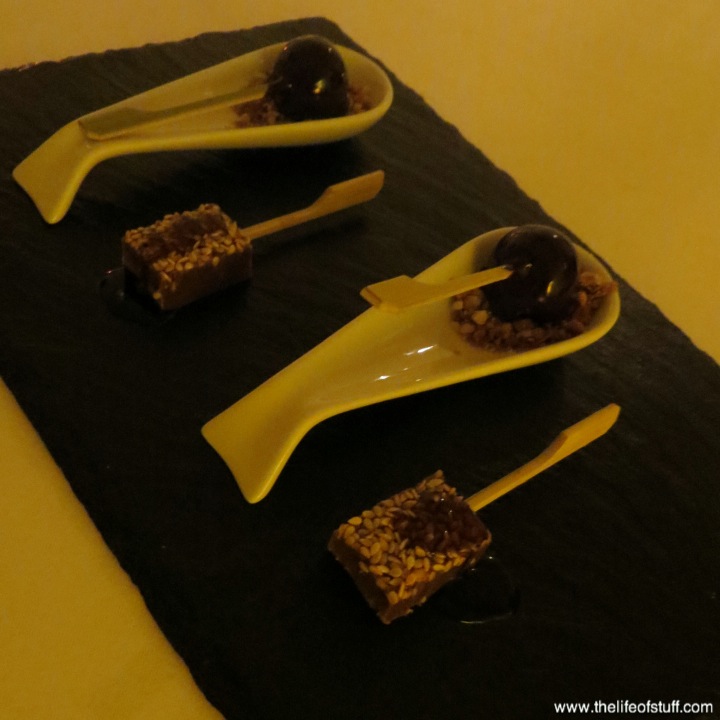 Conclusion: An excellent introduction to L’Ecrivain. The food was everything I expected it would be and more. The service was friendly, efficient and informative. The atmosphere was warm and relaxed. At €65.00 for a Six Course Tasting Dinner Menu, it was great value and one I will go for again when it changes. In the meantime, on our return which I hope is sooner rather than later, we want to indulge in some of L’Ecrivain’s many other menus … Mmm we can’t wait!

My photo’s really don’t do our meals justice so for more information on L’Ecrivain, you can visit their very informative website here www.lecrivain.com

Bevvy of the Week - De-Alcoholised Wine