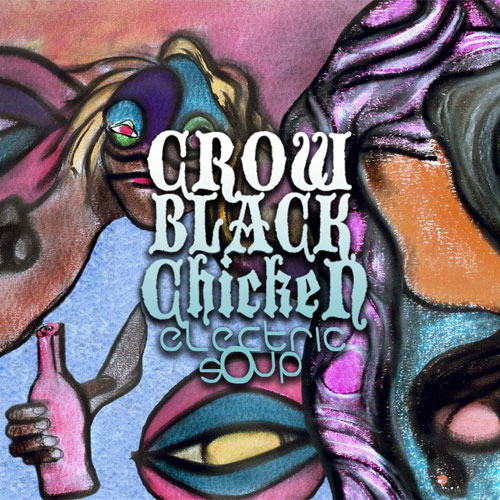 Crow Black Chicken have been a band of three members, Christy O’Hanlon, vocals and guitar, Steven McGrath, bass and Gev Barrett, drums, since 2009 and they hail from Ireland. I’ve only been been listening to the guys for about a year now. When you first hear their music you’ll be surprised with this information. Firstly that there are only three members as these guys make noise. Secondly that they’ve only been around since 2009 … sure that’s only four years! and thirdly that they hail from Tipperary and Cork. The reason you’ll be surprised that they’re from Tipperary and Cork, in fact Ireland at all, is their sound. Some have described them as the Irish ZZ Top, others have tried to reign in their Irish-ness and have said they take after Rory Gallagher. Personally speaking, I could and possibly do agree but I will also add to these that Crow Black Chicken to me have a deep blues, southern rock and almost Seattle grunge feel to their sound too.

I’ve heard on the grapevine that the band are a real hard working gig loving bunch. I know the guys played the Rory Gallagher Festival and Vantastival in Ireland a little while back. I also know that they played the Fluffy Rock Stage in the Green peace area for the 4 nights of the Glastonbury festival this year … wow! Even more stuff I know is that to mark the release of their Deluxe Edition of Electric Soup, the lads are preparing for a whopper of a gig in Whelan’s in a couple of weeks. July 20th to be percise. With ticket prices at €12.50 … you’d be feckin mad to miss it. After their final Dublin gig for a while, Crow Black Chicken will be touring the good ol’ U S of A supporting bluesy country singer Ray Wylie Hubbard … Sweet.

All the ramblings about the band I haven’t even mentioned the album and my ‘Listen of the Week’ … Shame on me! Well you know what. I’ve listened to Electric Soup in it’s entirety more than three times today alone and as I’ve said before I don’t like to dissect and wax lyrical about each song/track and it’s meaning. What I will say is that you can listen to it for free on the Crow Black Chicken website here and if you want to buy it for your phone or whatever its €8.99. There are thirteen songs in total on Electric Soup, each one bringing to your ears its own soul and passion, rocking, husky vocals, ridiculous guitar and bass and all keeping in time to talented drumming skills. Some songs you could imagine being played at Woodstock instead of Glastonbury. I’m looking forward to hear what will come from their American venture and what inspiration they will evoke for their next album!

As always I’ve included two video’s for your enjoyment. The first one is track one from Electric Soup called White Lightning and the second is track nine, Murmuration. As mentioned earlier and if you like what you hear, head into Whelans this day two weeks and show the lads some support before they head off flying the flag for Ireland in the US … yeh! To connect with Crow Black Chicken, you can find them on Facebook here and Twitter here.