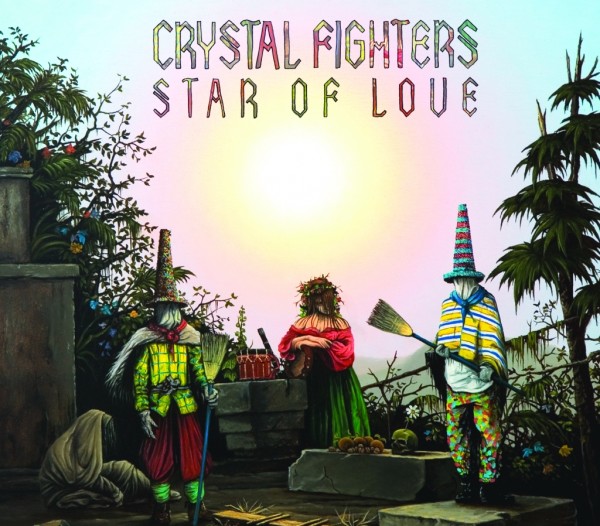 I’ve been pretty bad this week and haven’t listened to much music at all. Tut Tut! What I have listened to though is Crystal Fighter‘s first and only (to date) album Star of Love. They are just about ready to release their new album and have given us a taster of what to expect with their new song Wave, which you can preview by visiting their official website here. I was introduced to this band by a good friend shortly after they released this album. Later was a bit sick to realise that they’d played The Grand Social in November of the same year the album was released (2010) … but I immediately got Star of Love , have loved them since and await their return to Ireland … which will no doubt be to a bigger venue … hopefully not too big though … The Olympia would be perfect.

Crystal Fighter’s are Sebastian Pringle, Gilbert Vierich, who follows back on twitter :), Graham Dickson, Mimi Borrell and Laure Stockley. They hail from Spain and the UK and have been around since 2007. As per their Facebook page they ‘make fast dance music with Basque instruments, synthesizers‘ and their voices … You can’t get a better description than that really. I love the energy behind each song. I love that every story they tell on the album through their music is so clear. I love the mix of beautiful guitar picking with the rhythm of the percussion. I love the vocals and how some accents shine through. I love the fun. I love the fact that when you are listening to the album you can’t help but tap your foot (when in public), quicken your walk (when in public) or dance like a lunatic (when alone or with like-minded friends).

I’ve added two Youtube video’s below, just to give you an idea of what they have to offer. If you love them not only will you want to get your hands on this album but if Wave is anything to go by … then we’ll both be grabbing for their new album too. Follow is track 10 and I Love London is track 8 … and if you’d like to hear and see more you can visit their Youtube channel here enjoy …