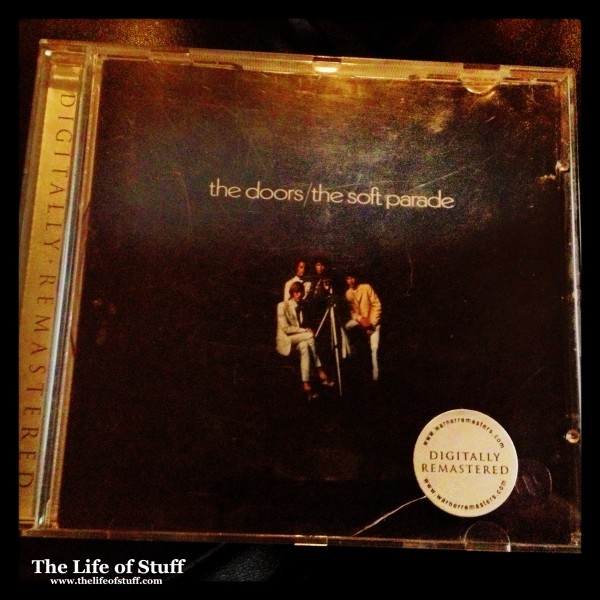 With the recent passing (May 20th 2013) of Ray Manzerek from The Doors, (delighted I got to witness Ray in action at two of his gigs here in Dublin) … it’s only fitting that the band will be featured again as a Listen of the Week, and I did say that The Doors will come up again and again as they were a really great band, so here it is …

The Soft Parade Album, this is the 4th album by The Doors and the one they got the most stick over. The Band changed their sound a bit for this album much to the dislike of fans and critics and introduced new instruments which is evident throughout the album. As well as adding new instruments to their sound it was also the first time that songs were credited to different band members. The reason for this was that Robby had a big part in the album, from writing songs to singing, and one of his lyrics in Tell all the People is what put Jim off. The lyric ” get your gun” was something Jim wasn’t happy singing as he thought it might encourage people to bring their guns out and god knows what else. So in the end he sang it but made sure people knew they were not his words. Anyway back to the album …

The Soft Parade album is packed with little gems, I say little gems because the whole album is no longer than 40 minutes long. Songs like Touch Me, Wild Child, Shaman’s Blues all make this album great but it’s the song that the album is named after, The Soft Parade that really makes it great. I won’t tell you about the song, I’ll just recommend you listen to the album and wait for The Soft Parade Song to come on, it’s the last song on the album. If you like The Doors and you haven’t heard this album it’s a must, and if you don’t like The Doors, it’s also a must, as it’s not the usual stuff from the band. If you haven’t got the album I’ve been thoughtful enough to add the videos for track six, Wild Child, live and track nine, the brilliant The Soft Parade, live. You’re welcome and enjoy!

Bevvy of the Week - Limoncello