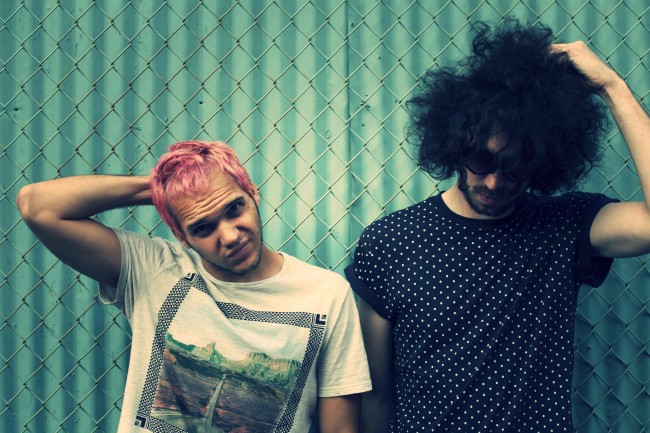 New York Duo Ghost Beach have a new Single ‘Miracle’  which will be out on October 25th – sure that’s only down the road! I was emailed a press release to remind me of it’s release, which I thought would be nice to share with you. If you’re not too familiar with Ghost Beach you may want to get familiar after checking out this new single. I’ve included the ‘Lyric’ video – the official video isn’t finished yet, if it isn’t your cup of tea don’t judge the music on it and have a listen to the soundcloud version instead!

With Ghost Beach coming up on two years old  ‘…  the New York based duo of Josh Ocean and Eric ‘Doc’ Mendesohn have already perfected a blend of retro yet futuristic, soaring synth-pop and Miracle the first single to be taken from their debut album, encapsulates that sound perfectly.

Ghost Beach are the latest indie-pop pioneers to set the internet ablaze, the band have consistently hit no.1 on Hype Machine with every track they’ve put online themselves. Their retro-future aesthetic sounds like the holy trifecta of The Police, Depeche Mode, and Daft Punk, with a little Passion Pit sprinkled on top for good measure.

The band have since signed to Nettwerk Records in the UK & Ireland, and have their debut album due in the new year. Ghost Beach write what could be killer indie-pop hits, yet stick to their DIY roots, creating a sound that the band describe as Tropical Grit Pop. One listen to Miracle proves just what a fitting description that is.’ (Orchestrate)

Here are some reviews:

“ …One of the bands spearheading the feel-good summer charge is Brooklyn duo Ghost Beach, who serve up a delectable fusion of retro synth-laden beats interwoven with chic tropical beats” – Earmilk

“Ghost Beach are seductively good, with endless factors shaping their sound. In parts it sounds like synth-laden ’80s pop, and on others resembles a punk-rock vibe with lengthy guitar solos, like on single “First Time”. Their confused adolescent genre is a result of influences from the likes of Depeche Mode, Daft Punk and The Police. The American pairing are reminiscent of an early Hot Hot Heat, with a semi-fem vocal, unashamedly bathing in a pop bath – and I don’t mean the bubbles. They produced something that’s a lot more grown up. Saying that, they have the fun factor, the nonchalant attitude, and a contagious “let’s not stop partying until we throw up” glitter factor “
-Tim Osbourne (Obscure Sound)

For more info on Ghost Beach, why not check out their website and connect with them here ↓

I’m hoping they make a trip across the water for the New Year 2014, as they usually like to play with a full band and it’s looking to be a big year for them!