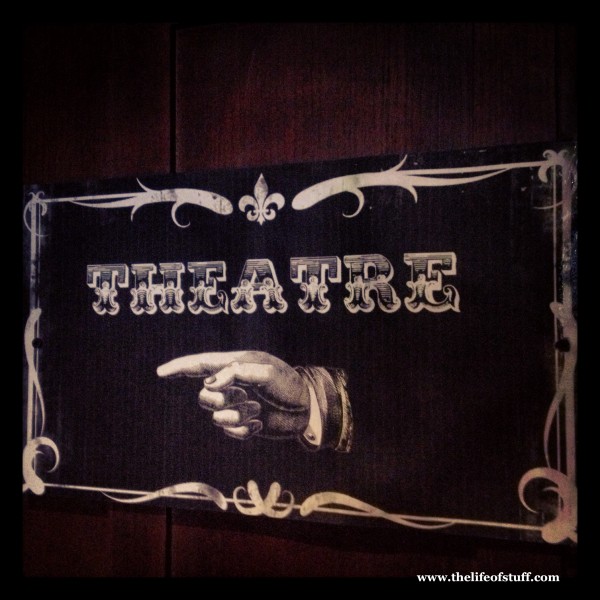 I’m quite partial to plays, the theatre and take great enjoyment watching thespians portray their characters and tell their story live in front of an audience. In Dublin I’ve been to the Abbey  Theatre, the Gaiety, The New Theatre, the Bord Gais Energy Theatre and the Dublin Conference Centre … all well known, renowned. One theatre that I didn’t know about until recently is the Theatre Upstairs. I think it’s great that although I have lived in Dublin over 10 years, I am still learning more about what this city and its people have to offer.

As from the name, Theatre Upstairs is a theatre and is, well, upstairs. It’s above Lanigan’s Bar (handy if you have a goo for a pint!) on Eden Quay in Dublin 1 (that’s north of the Liffey folks). It was founded in 2010 and as per its Facebook page which you can visit here, it reopened in July (I’m presuming that’s last year but correct me if I’m wrong). On walking into the theatre area you are greeted by a bright and open seating area, a bar and great big windows that look out onto the Liffey and the city outside. As per the aforementioned Facebook page …

‘Theatre Upstairs was realised out of a need to give a platform for new work as well as stage productions that might not otherwise be seen in Ireland. Theatre Upstairs is a space where people working within the arts can crossover into new roles or areas that they may not have had the opportunity to work in before.’ (Theatre Upstairs)

The work and writings performed on the stage at the theatre range from new writing to world premieres. The performers that deliver and take to the stage range from new to experienced actors. The cost of a play with a light lunch is just €10 and normally starts at 1pm and lasts about 40 minutes, which means that you could make your lunch date more interesting than you thought you could and which I look forward to experiencing. Evening plays also take place, normally at 7pm and are €10 … and it was an evening play, The Last Crusader that I experienced last night. 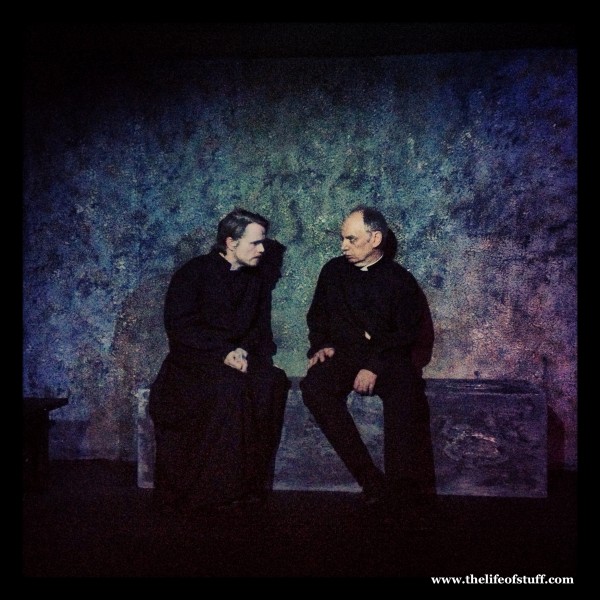 The play is called The Last Crusader, it has been running daily at 7pm since April 2nd and will run until April 13th and as mentioned it costs €10 to see … a bargain! It was written by Barry McKinley, is directed by Karl Shiels (who is also the Artistic Director of the theatre) and stars actors Donncha Crowley, Patrick O’Donnell, Anthony Morris and Tiernan Kearns.

The play focuses on Father Meara, played by Donncha Crowley and Father Blake, played by Patrick O’Donnell who are held in a detention centre on the outskirts of Moscow. They are being detained by henchmen, Gleck, played by Anthony Morris and Tomas, played by Teirnan Kearns under the guidance of the head of intellegence, the mysterious ‘Thursday’ who is hunting down priests in search for The Last Crusader.

I thoroughly enjoyed the play and can highly recommend it. Barry McKinley really caught my attention with humour that evolved into fear and then  anger. Donncha Crowley has a gift that allows for words to roll off his tongue which can make you doubt it is a script. Patrick O’Donnell conveys fear, pain and anger through every sense of his being, from the way in which he emphasises his words that come so freely to the look of anguish in his eyes and sweat on his brow. Anthony Morris and Tiernan Kearns do a great job of the henchmen, with accents that had me guessing if they weren’t from Moscow and mannerisms that were believable. The twist in the tale finished what was a great performance. 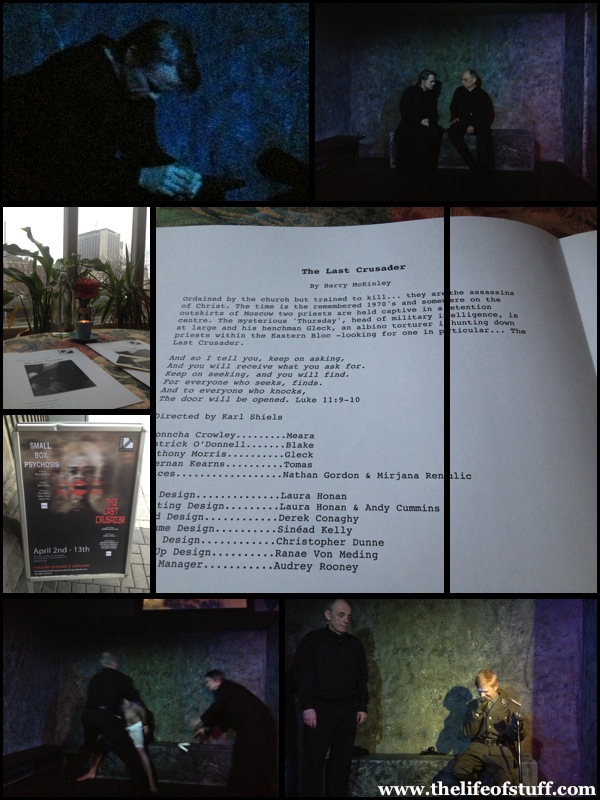 I’m really glad I found and learnt of Theatre Upstairs. I’m looking forward to experiencing a lunchtime performance and will definitely return to experience more performances from talented actors playing plays written by talented authors. For more information on the evening play The Last Crusader, the lunchtime play Small Box Psychosis, which is now running and is also written by Barry McKinley, up and coming plays and fundraisers for plays just join the Theatre Upstairs on Facebook or just join them above the bar.

Bevvy of the Week - Amarula

Listen of the Week - Azealia Banks