Last year Patrick and I were two of an intimate group (that’s a handful) of bloggers and writers invited into The Brewer’s Project at St. James’s Gate in Dublin. You may remember seeing my updates all over my social media accounts. 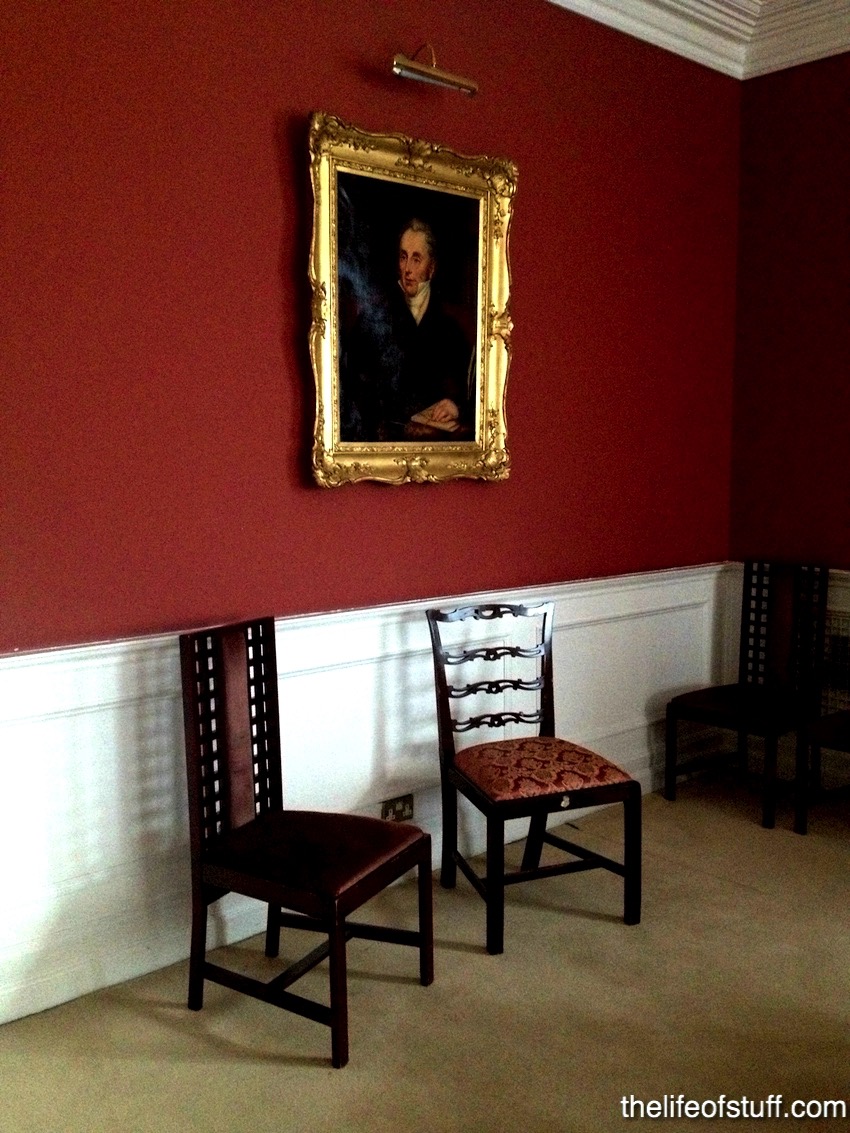 We felt very special to be invited, almost like golden ticket holders when we ventured through St. James’s Gate and waited to be taken on a tour around Guinness’ own micro-brewery within a brewery – The Pilot Brewery.

You see The Brewer’s Project is a brewery within the historic walls of the home of Guinness. It’s where the magic happens outside of the Guinness we all know. It’s where Brewery Manager, Luiz Ortega, Master Brewer, Gearóid Cahill and their colleagues, trial, taste and experiment with beer that might or might not reach your lips one day.

The tour was excellent. We got to; witness in person how the brewery worked, meet the people behind the brewery, see and touch the Guinness ledgers that are centuries old and hold many secret recipes, stand in the Guinness courtyards (and see behind that mysterious black door that’s metres off the ground) and taste first hand their newest beers to the market. Fantastic.

You could say that it’s like Guinness has its own craft beer brewery, and in a way that is true. You could then say that Guinness is trying to edge in on the massive craft beer market wave that has swept over Ireland, and in a way you could be right.

However unlike the many large-scale beer breweries in the US who buy out and take over small craft breweries to call their own, Guinness is actually doing it themselves, they’re creating their own unique beer, and with taste. They are creating new flavours and also taking inspiration from recipes from their own 18th and 19th century Guinness ledgers with the mission of bringing to the public something they haven’t tried before. Now that can’t be replicated.

Fast forward a little over a year later and Patrick and I were invited back to The Brewer’s Project but this time to what is known as The Open Gate. 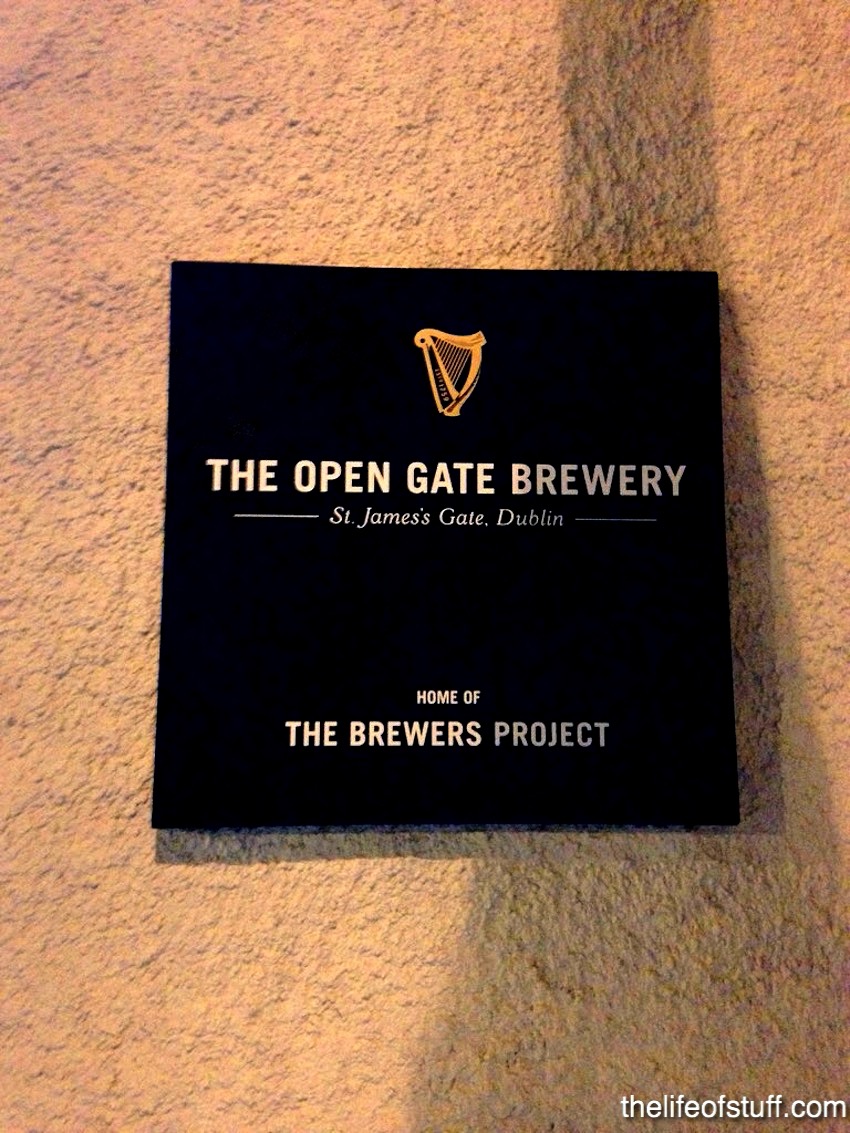 The Open Gate is a tasting experience within The Brewer’s Project. To make this clearer it’s like having a bar in a brewery. The Open Gate is the bar and the Guinness Pilot Brewery is the brewery.

It’s an exciting venture and one that we really enjoyed experiencing. As a visitor you get to see the brewery from every angle, it’s beside you and above you. You don’t get a tour because after all it is a working brewery but you do get to try beers that you most likely didn’t know existed, because for many of these beers outside of The Open Gate they don’t exist! 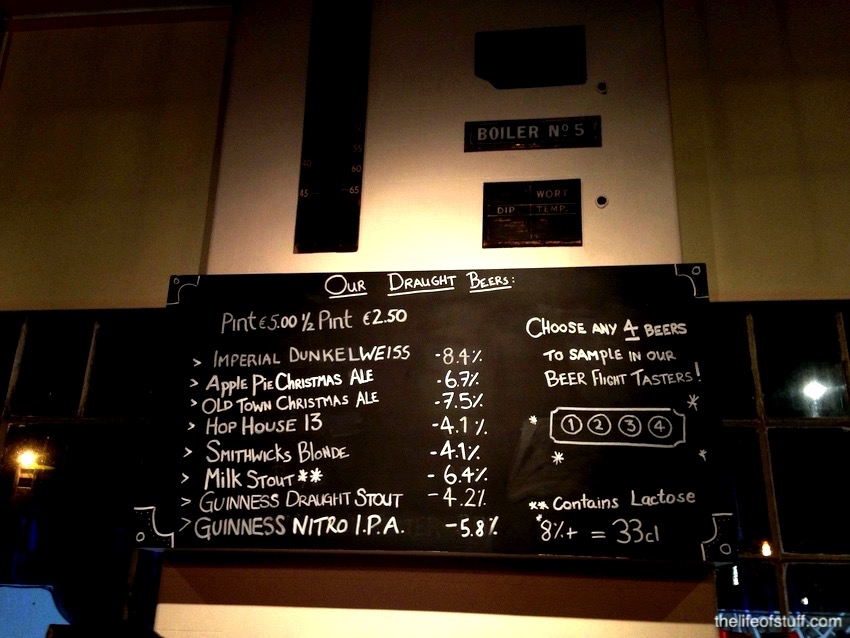 Not only that but you get the chance to talk with the Brewers who can explain all you want to know about how the beer was created in the first place, a must for beer enthusiasts and craft beer lovers alike.

It was obviously Christmas time when we visited and although we didn’t have a white Christmas, Guinness made it snow … we were just missing Bing Crosby! We were treated to music by DJ Nialler9 and to delicious canapes. The beer was the highlight though and we got to try all five that were on offer, Guinness Nitro IPA (tasty and popular), Imperial Dunkleweiss (which I loved), Hop House 13 (newly released and available outside of The Open Gate), Apple Pie Christmas Ale (you could actually taste the apples!) and Guinness Draught (my old favourite).

Open on Thursday and Friday’s from 5pm to 10.30pm each week and costing only €6 which includes a beer tasting board, this experience is a steal but booking is essential. A selection of gourmet snack food is available to pair with your beer tasting.

For wine, beer and spirits recommendations visit Patrick’s Bevvy of the Week page.