Patrick and I truly have a thing for French Dining, hence the reason we spent our two week honeymoon trying, testing and dining our way from Bordeaux through the South of France, along the Cote d’Azure to Nice last July, 2013 … so when we were advised by sister’s Fiancé that we would be dining in the Vie De Chateaux restaurant in Naas, Co. Kildare for her birthday dinner, we were pleased to say the least. Vie De Châteaux has a great reputation and we were going to find out why. 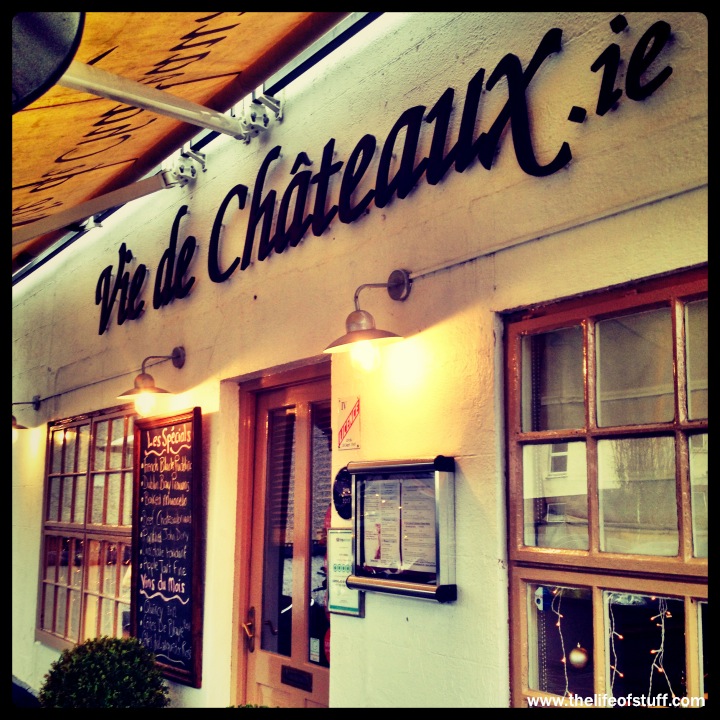 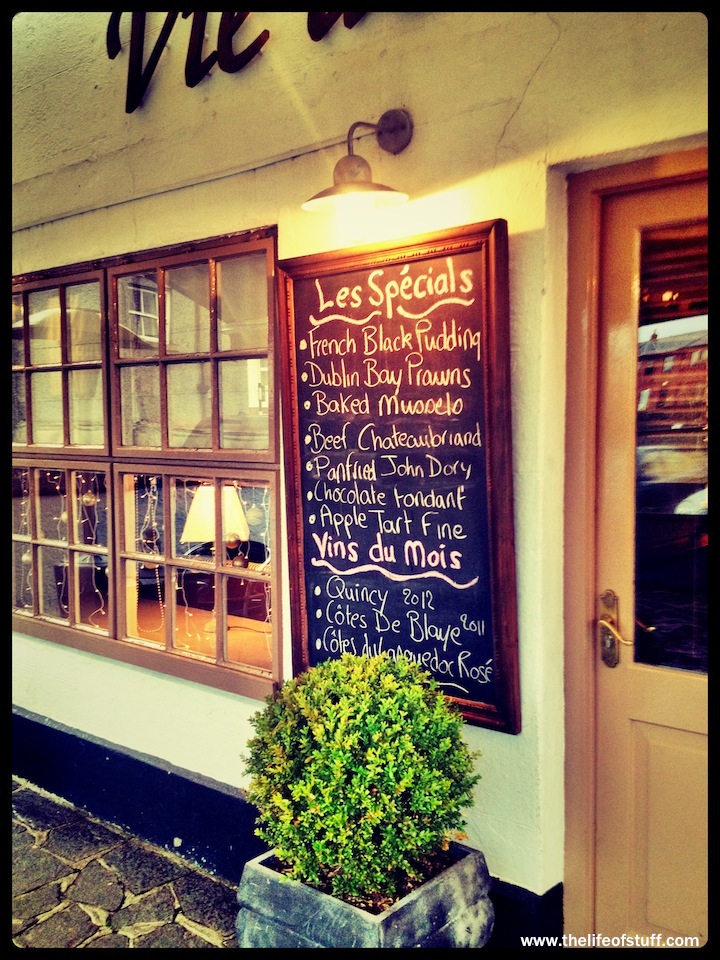 First things first. We drove from Dublin and I used my google maps to direct us to the restaurant. Being a typical wintery rainy Sunday in Ireland we wanted to park as near to the restaurant as possible, however the map directed us otherwise and we were directed to the other side of the small harbour. This would have faired as a glorious little walk after our dinner had the weather permitted but it didn’t so after a turnabout here and there we arrived at the right side of the harbour and were able to park right next to the restaurant. Just thought I’d include this in case it happens to you too.

From the minute you arrive at the restaurant there is something warm and inviting. Okay the gorgeous Christmas tree that sat outside the front of the restaurant and festive lights peeping through the windows did help, but I think it’s more to do with the building itself than the added dazzle that does it. On the front door and wall you will notice numerous awards, recent awards like the ‘Taste of Waterways 2013’, the ‘Tripadvisor Certificate of Excellence 2012’, the ‘Michelin Guide’ stickers of 2013/2012/2011 and 2010′ … in fact as Vie De Châteaux boasts that they have been …

… at the top of the list of best restaurants in Ireland since opening in 2007.

No easy feat … and we were looking forward to what they had to offer!

There were twelve of us booked in for dinner on Sunday … okay really there were ten and a half as my month old nephew slept soundly throughout and my niece is only two years old so a vegetable bowl and meat from her parents plate would be the extent of her dining ambitions. 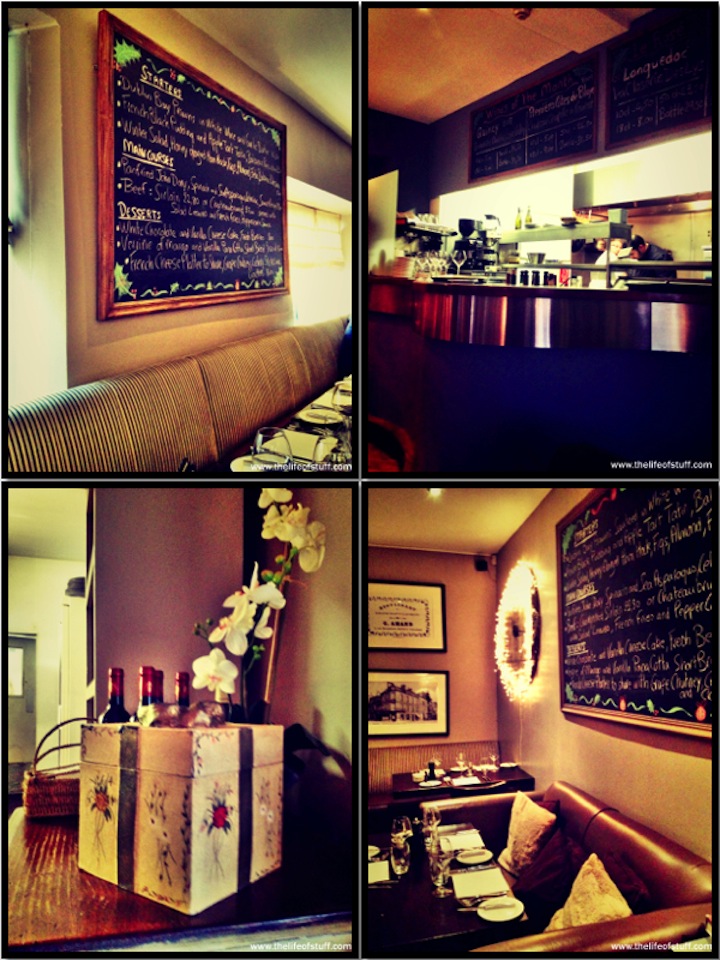 The restaurant is well laid out, with ample space between tables which is always a big thing for me as I really don’t like sitting on someones lip when I’m dining out … if you know what I mean. The decor is fresh and has a French theme throughout with paintings of grapes and chalk blackboards on the walls, carefully placed wine boxes and flowers on tables. It even has a small caged cellar displaying wines and boxes of wine. At the back of the restaurant lies the kitchen and the Chefs, who despite the obvious work they had before them with a nearly full to capacity restaurant, were calm, collected and funnily enough rather quiet!

Fresh bread was brought to our table, along with water and our wine choice. We were off to a good start as the bread was crusty and my choice of a simple Pinot Noir (€26.00) was easy on the palate. There were specials on the blackboard behind and in front of us and we could have chosen from the À la Carte Menu but the Sunday Bistro Menu of Three Courses for €25.00 suited us all down to the ground as the selection was varied enough for us all to be more than happy with our choices.

Now I’m not going to tell you what everyone chose and enjoyed as I’d be here all night and I really don’t think you’d be thankful of the read. What I will do now is focus on Patrick and my choices and our verdict on them. I’d love to be able to reiterate the exact way our dining options were presented but alas I didn’t take a photo of the menu and it changes every Sunday so I couldn’t nab it off their website.

The Meal and Verdicts: 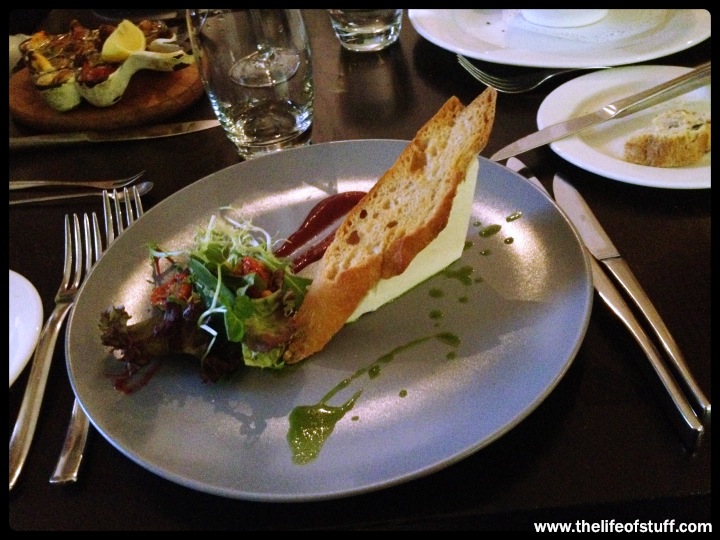 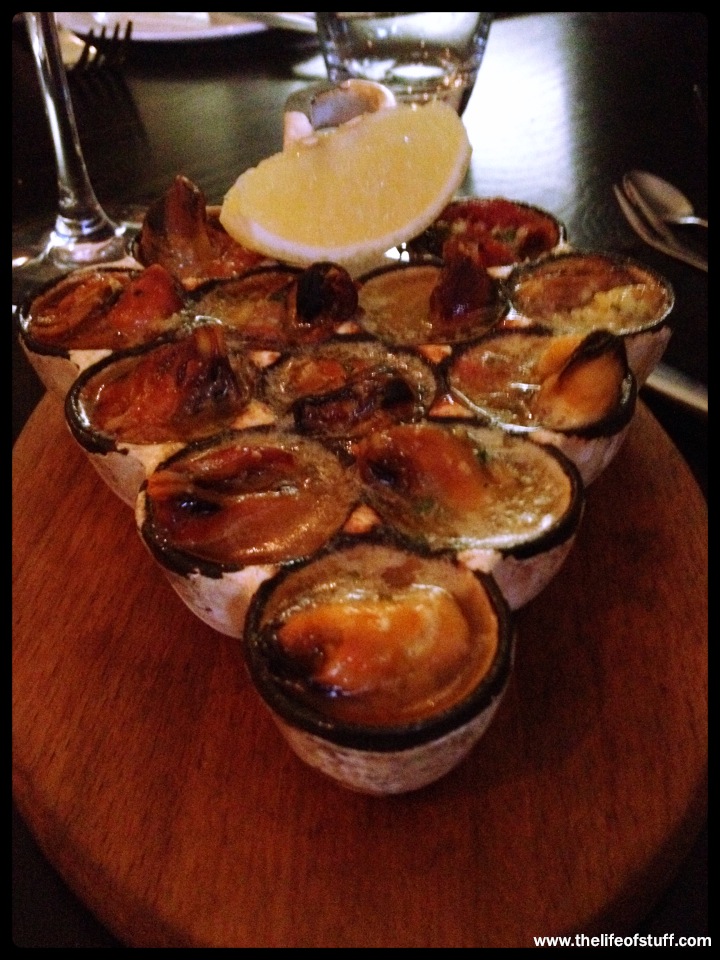 I chose the goats cheese with crostini and salad. Patrick chose ‘Les Moules’, baked mussels in tomato fondue and garlic butter. Both were delicious, so much so that we swapped to let each other enjoy each others choice … now that’s love! The goats cheese was creamy and the crostini perfectly crisp. The baked mussels were presented brilliantly. No messing about with shells and we were able to get straight to the good stuff. 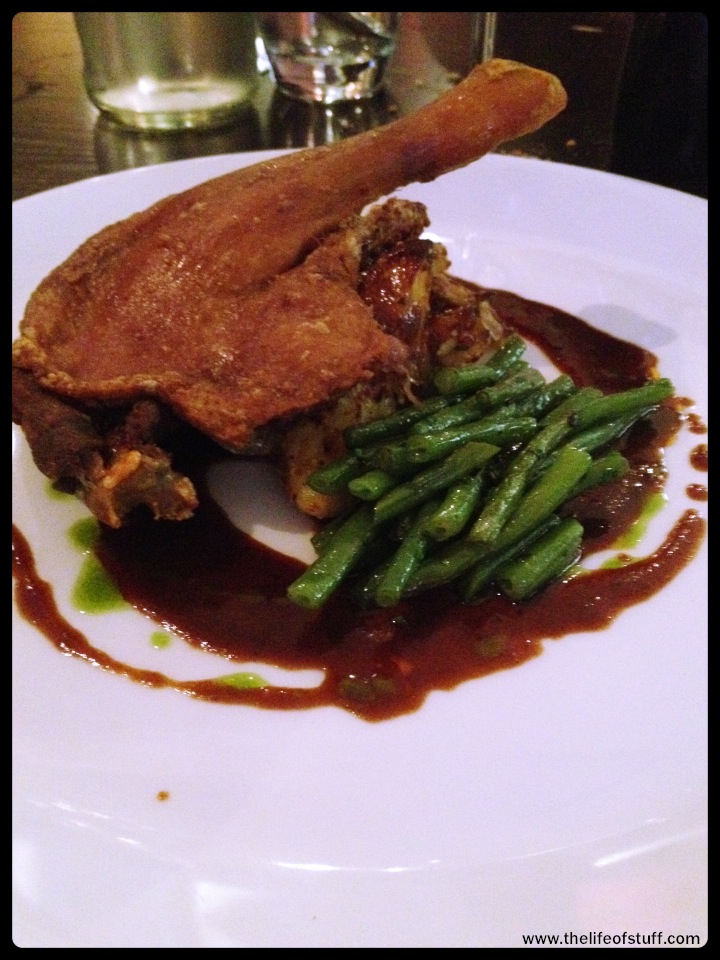 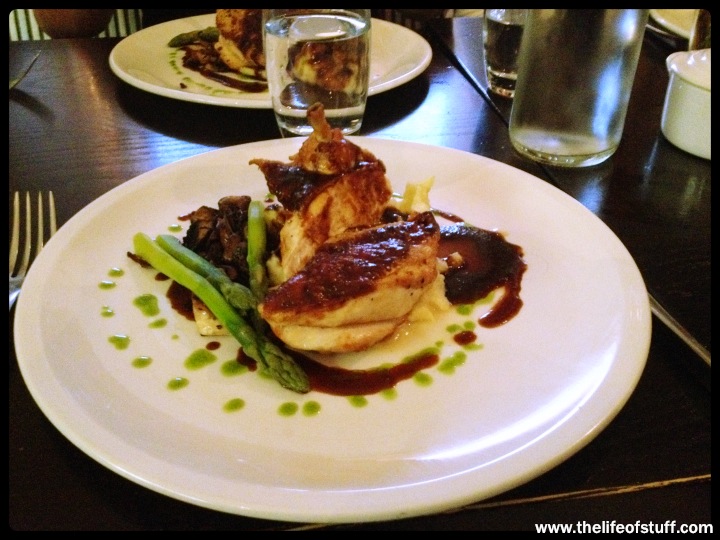 I was surprised that Patrick chose the ‘Le Poulet’ which was a roast suprême of free range chicken with wild mushrooms sauce and mashed potatoes. Not because it didn’t sound delicious but because he rarely chooses chicken when we dine out. He was happy with his selection and having had a little taste of some of the chicken, I can add that it was juicy and white. I chose the Confit Duck leg, which came with roast mustard potatoes and green beans. To be honest my first reaction was that the duck wasn’t the warmest even though the plate was hot and it was obvious that it had been prepared well in advance. Saying that I was impressed with the crispiness of the skin as I knew I’d eat it all and the duck under the crispy skin was delicious. Really. The potatoes which were cut into wedges were tasty but I wasn’t completely gone on the amount of mustard that was on them. To be honest I thought it was the sauce I didn’t like but once I realised it was the mustard, I enjoyed my meal more. The vegetables were tasty. Just to add, the Plaice and Pork dishes that were chosen by my fellow birthday meal diners were elegantly presented the reactions received was that of happy faces and full bellies, but not too full as the dessert beckoned. 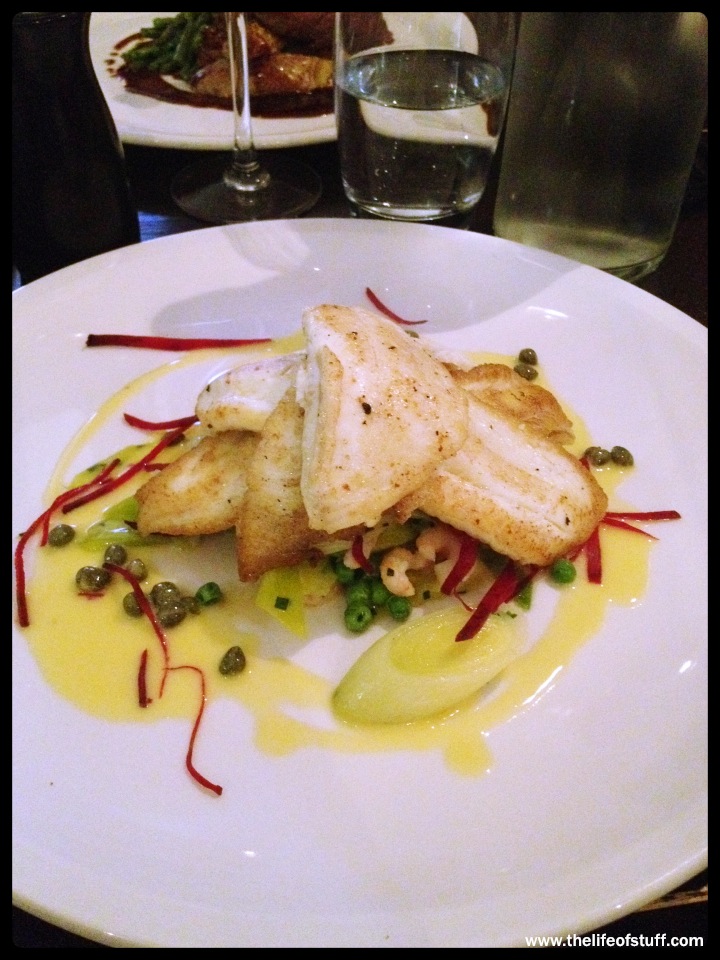 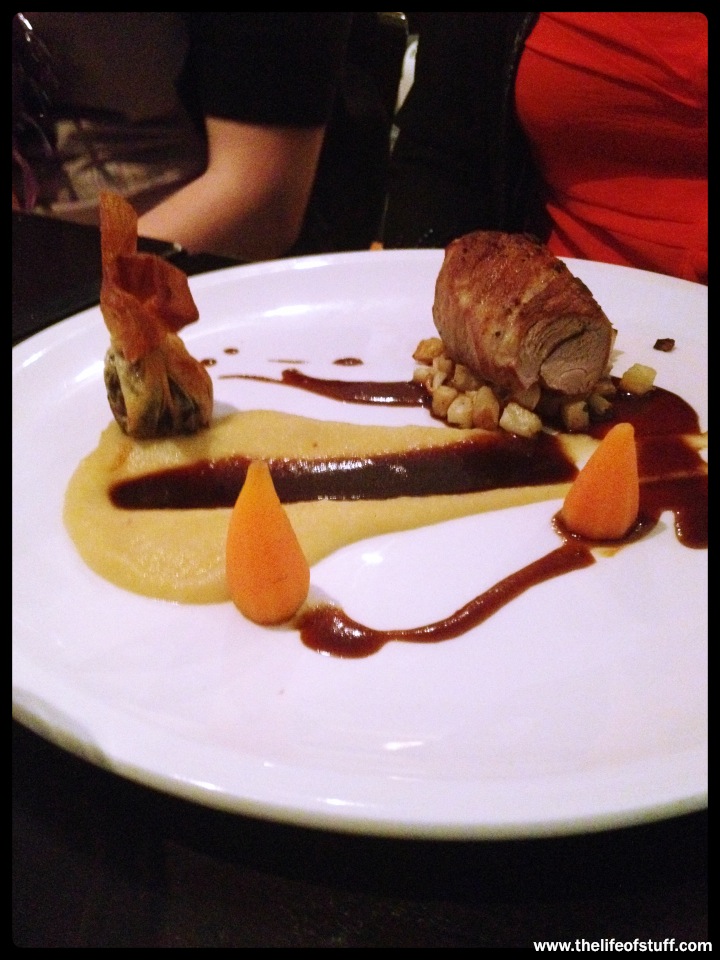 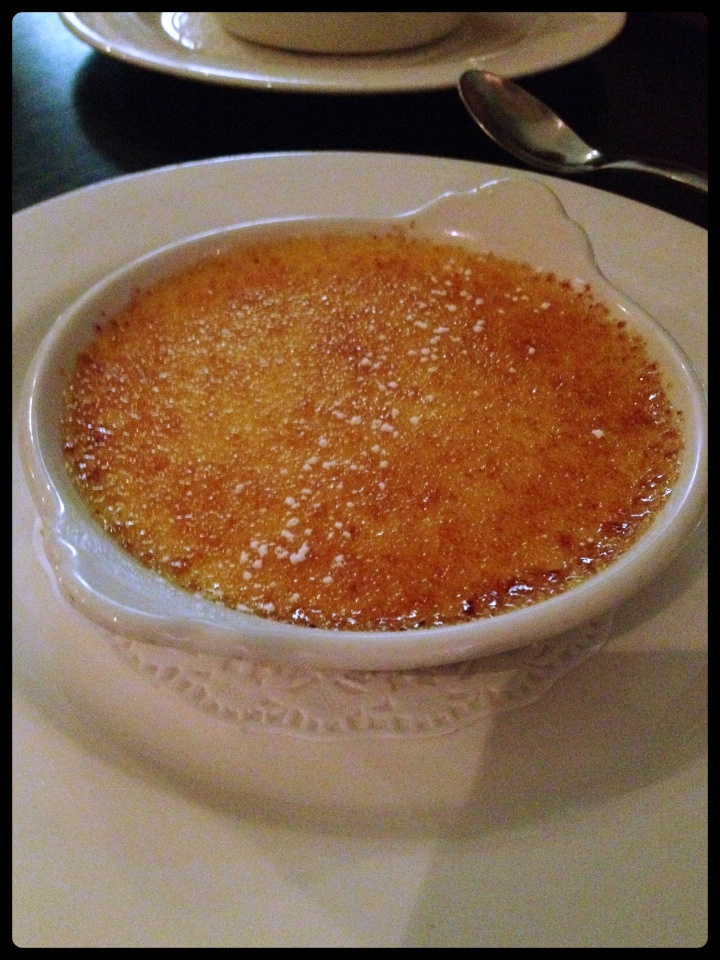 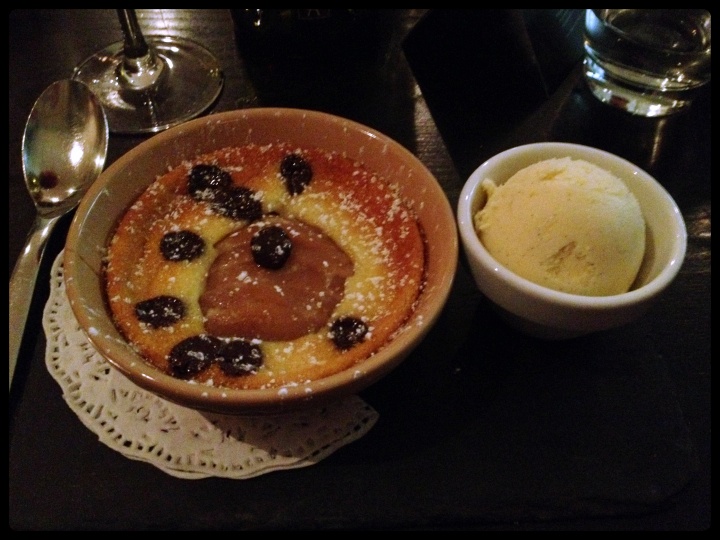 Patrick chose his favourite EVER dessert, Crème brûlée. I chose the Warm Pear Clafoutis that came with chocolate and almonds and which was served with a decent size scoop of vanilla ice-cream. I also had an expresso coffee, I was once told that its best to drink a non-milky coffee after dinner as it helps with digestion, so I mostly stick to a black coffee or espresso after big meals. Patrick advised that the Crème brûlée’s consistency was to his liking and of course the taste too, he should know this by now as he has tasted enough of these over the years. My Warm Pear Clafoutis was delicious, the pear as far as I know was poached and the consistency was perfect for it’s pastry partner. I’m not a huge almond fan but they did not over power and with the added benefit of some really creamy vanilla ice-cream, I loved it.

This conclusion is going to be short and sweet and not only do I speak for both Patrick and I but for our whole party when I say that I look forward to returning. The ambience was relaxed and warm. The service was attentive but not over powering. The Food which we looked forward to, did not disappoint. The value was fantastic for this Sunday Set Menu.

I look forward to my return and trying out more from the Set and Á la Carte menus.

Happy Christmas 2013 Love from The Life of Stuff