Did you know that the Teeling Whiskey Distillery is the first new distillery in Dublin in 125 years and the only operational distillery in the city? You do now.

This year, 2016, the Teeling Whiskey Distillery beat off stiff competition from other whiskey visitor attractions from around the world to be named the World’s Best Whiskey Visitor Attraction at the World Whiskies Awards.

To think that brothers Jack and Stephen Teeling only opened the distillery to the public in June of last year, and have already welcomed over 45,000 people, and scooped a prestigious award, is truly brilliant. Long may their success story last!

Late last year, well Christmas time to be more precise (as you can see from my photo below), Patrick, our infant son Smith, and I took a guided tour of the Teeling Whiskey Distillery in Newmarket, Dublin 8 on invite. 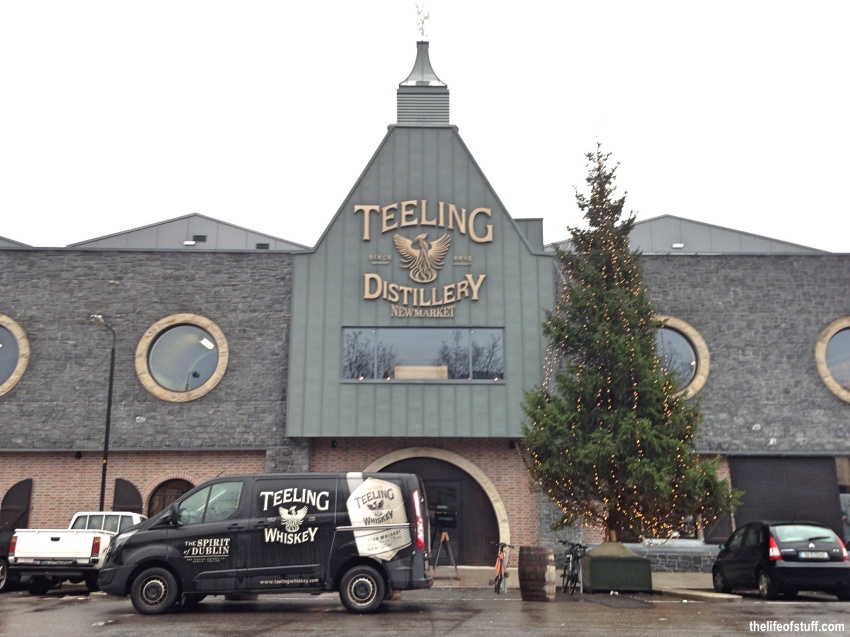 We were greeted at the reception which is straight in front of you when you enter the distillery doors. To the right is the Phoenix Café that serves 3Fe coffee, sandwiches and pastries. We didn’t indulge but will next time.

To the left is the exhibition area and where our tour began. 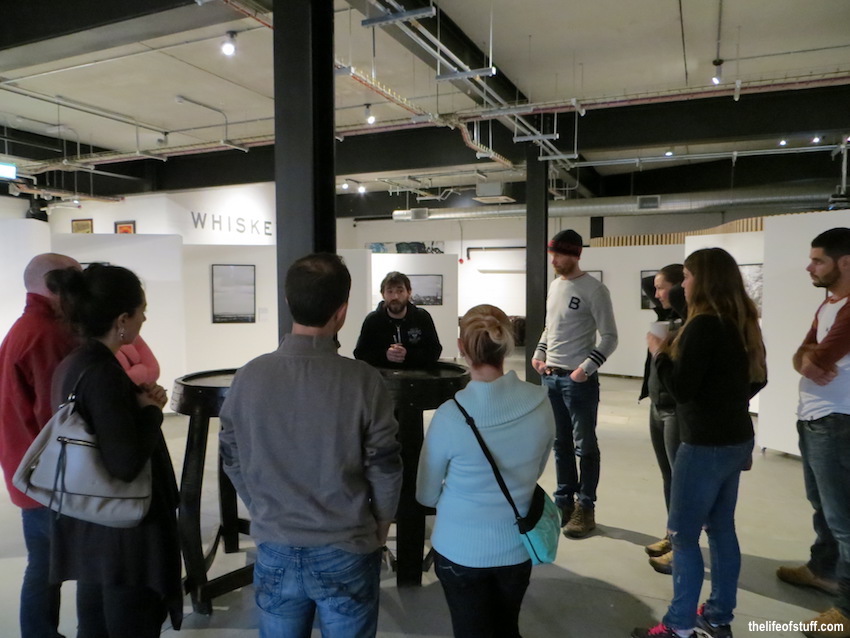 Our tour guide was Dubliner Peter, who although surprisingly enough was not in his current role long, was full of knowledge and passion for Teeling Whiskey and his job. His granddad was a business owner himself in the Liberties so he felt the strength in his connection. 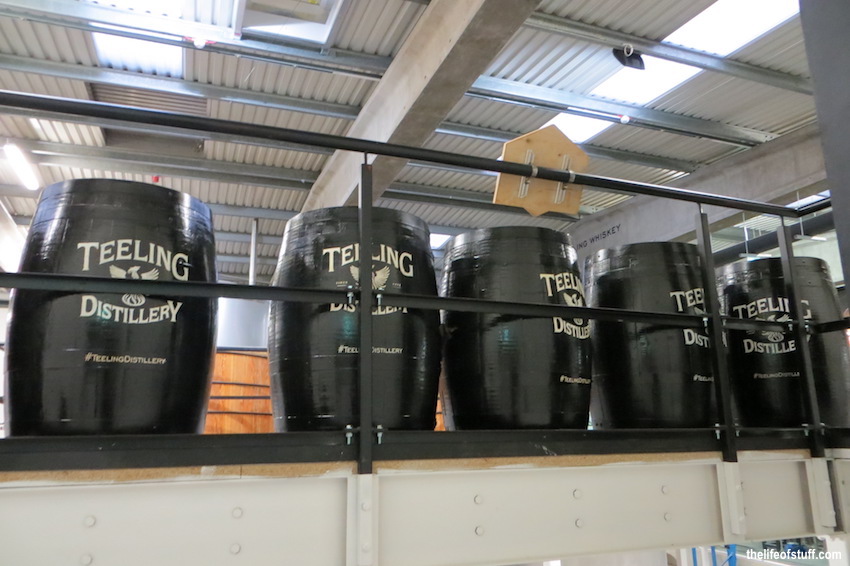 Here’s a little about its heritage and history:

The Teelings have been crafting Irish whiskey since 1782. Walter Teeling had a distillery on Marrowbone Lane in The Liberties, which isn’t too far from where the current Teeling Distillery can be found.

All those years ago the areas of The Liberties, the Coombe, Newmarket and Smithfield were known as the ‘Golden Triangle’ because these areas together housed over 37 different distilleries.

During the 19th century Dublin whiskey became the number one whiskey globally, however due to factors such as war, the US prohibition and competition from our Scottish cousins, Irish whiskey lost its place and distilleries began to close their doors.  In 1976 the last Dublin distillery shut down and moved its production to Midleton, Cork.

In 2012 Jack Teeling founded and became the Managing Director of the Teeling Whiskey Distillery in Dublin. With over 15 years experience in the whiskey industry a CV that reads Managing Director with the Cooley Distillery (which was sold to Beam, yes Jim Beam, for €73 million in 2012) … you could say there was no better man for the job. In 2013 Stephen Teeling joined his brother to run the Teeling Empire as the Sales and Marketing Director. Stephen also has extensive whiskey industry experience having worked as a Commercial Manager for Cooley Distillery and then Senior Global Marketing Manager in Beam. 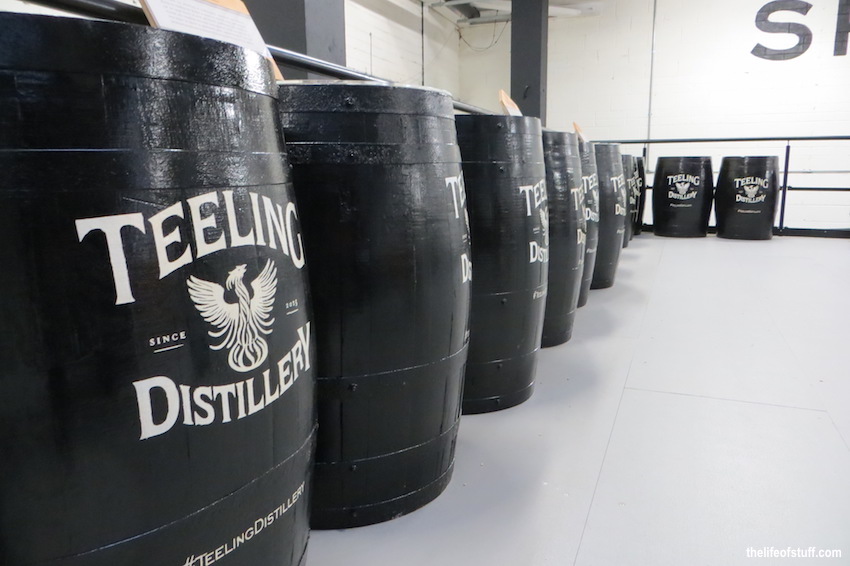 Peter explained the ingredients that go into every drop of Teeling Whiskey and Poitín and shared with us lots of behind the scenes information and facts, and here are some for you … The Teeling Whiskey Distillery is located over a large aquifer that was traditionally used by local distilleries and brewers in the area. They have their own well on site which means they are self-reliant with regards to access to water, an essential whiskey element. 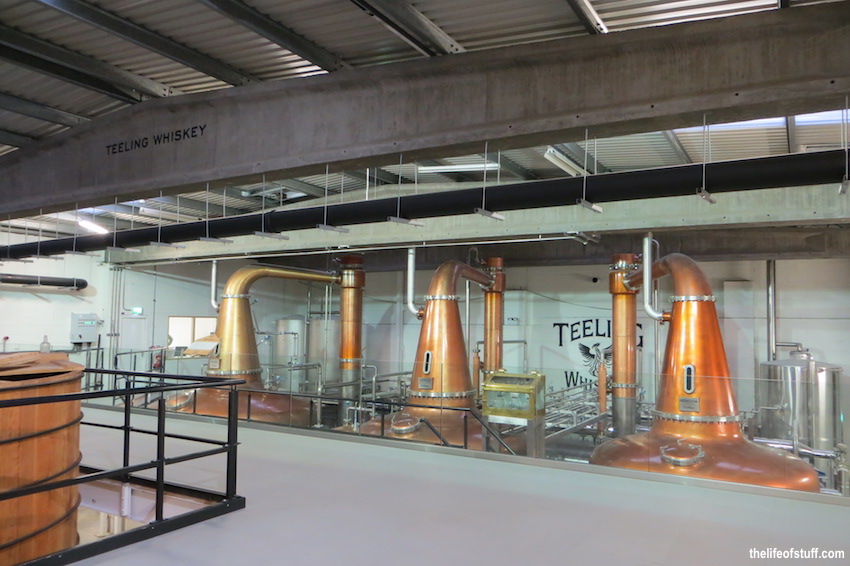 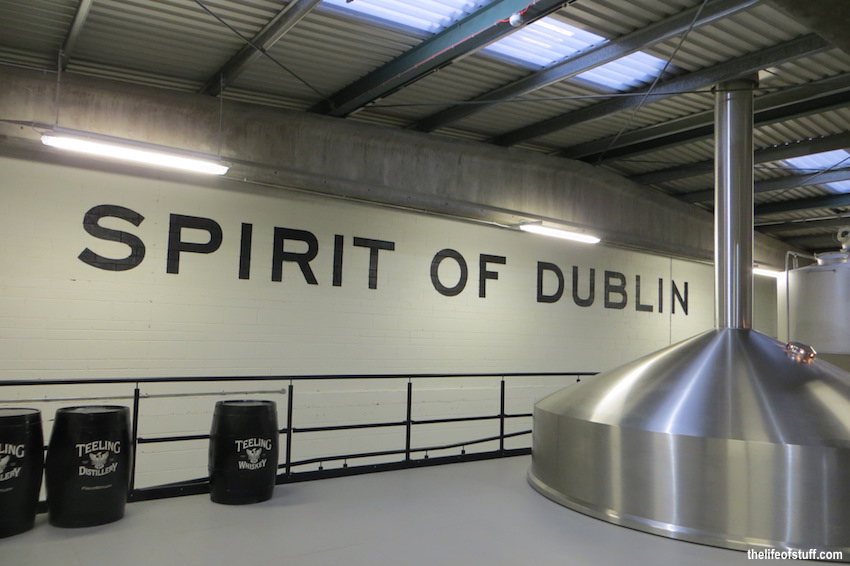 … Teeling Whiskey Distillery use a ‘Spirit Safe’ to regulate the volume of alcohol (that’s it in the middle of the stills below) … the strengths of the whiskeys range from 8% to 25% to 50% to 84% and EVERY cask is tasted by Sommeliers. 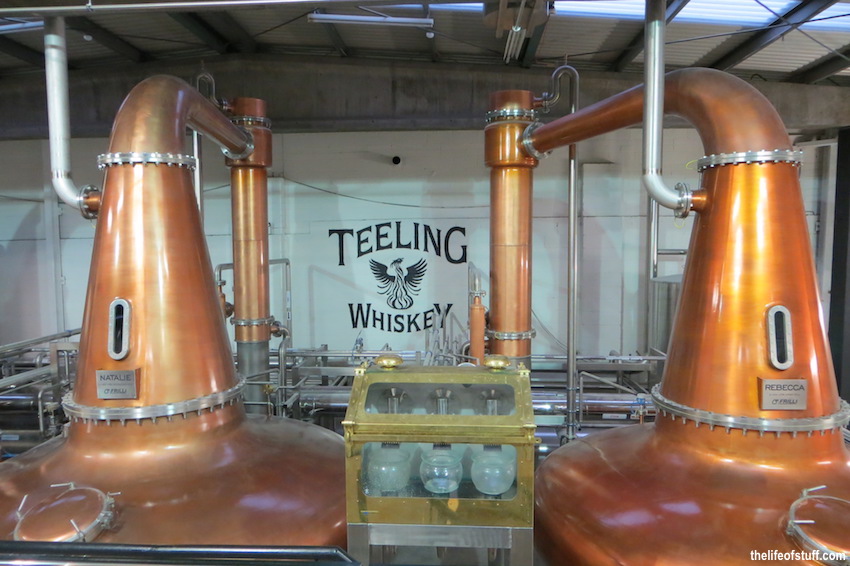 After you’ve read what an Angel’s Share is above, have a look at what is considered the breakfast, lunch and dinner Teeling Whiskeys. Here’s the breakdown – The Single Grain is an award winner and considered Breakfast. The Lunch whiskey is Small Batch, is 80% corn 20% malt and is smooth, and great in a cocktail, The Dinner whiskey is Single Malt, 100% malt barley, a single malt.

Did you know that to be called Irish whiskey, the whiskey needs to be made on Irish soil and aged for three years and one day. Now you do!

Teeling also make poitín which is an un-aged whiskey … Teeling’s Poitín has won numerous awards over the years from Bronze Medal Winners at the International Spirits Challenge to Overall Winner of Best Poitín at the Irish Whiskey Awards. 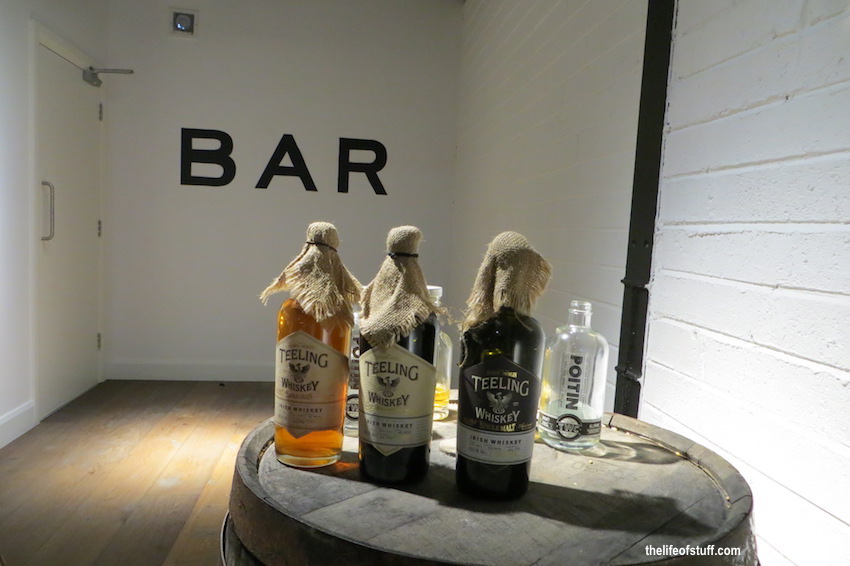 After the tour of the distillery it was on to the tastings. I loved the large function area that greeted us, the funky seating areas and spaces make it perfect for parties or get-together’s. Actually when we were there, there was talk of an upcoming wedding to be celebrated there!

Our whiskey tastings were all ready and waiting for us along with a glass of water and a straw. As mentioned the option we availed of was the Teeling Trinity Tasting – Small Batch, Single Grain and Single Malt (€20). 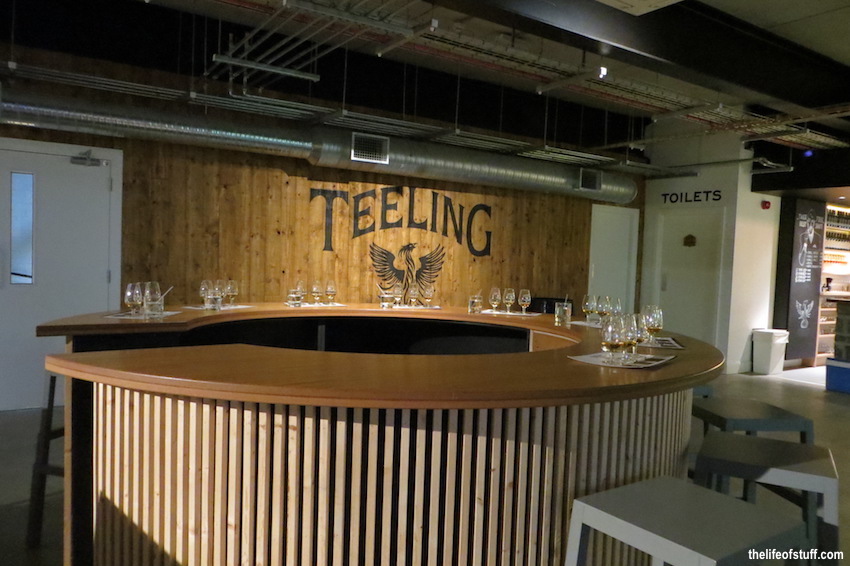 They all went down smoothly for us. As whiskey drinkers we had already experienced the Small Batch but we were both very interested to try out the Single Grain and Single Malt. 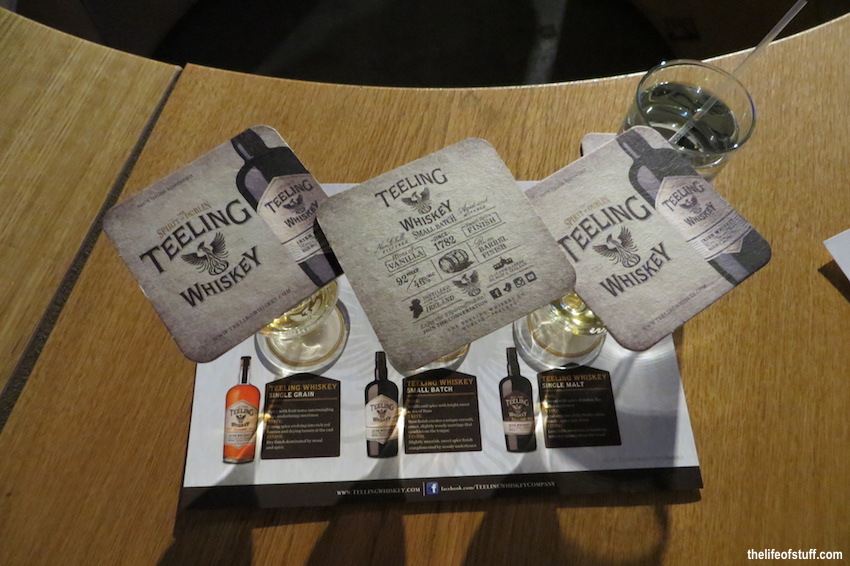 We weren’t disappointed and if we didn’t have baby in tow, there is no denying that we probably would have ordered an extra shot at the bar afterwards (a reason to return I suppose). 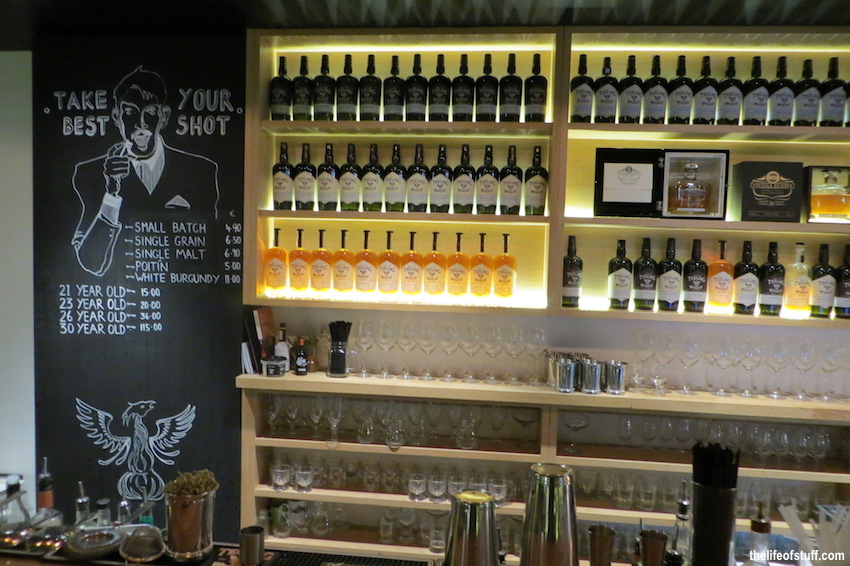 They had everything from hipster Teeling Whiskey in jars, to Teeling Whiskey & Poitín Marmalade (raging I didn’t pick one of these up … as I’m licking my lips now thinking of the taste). 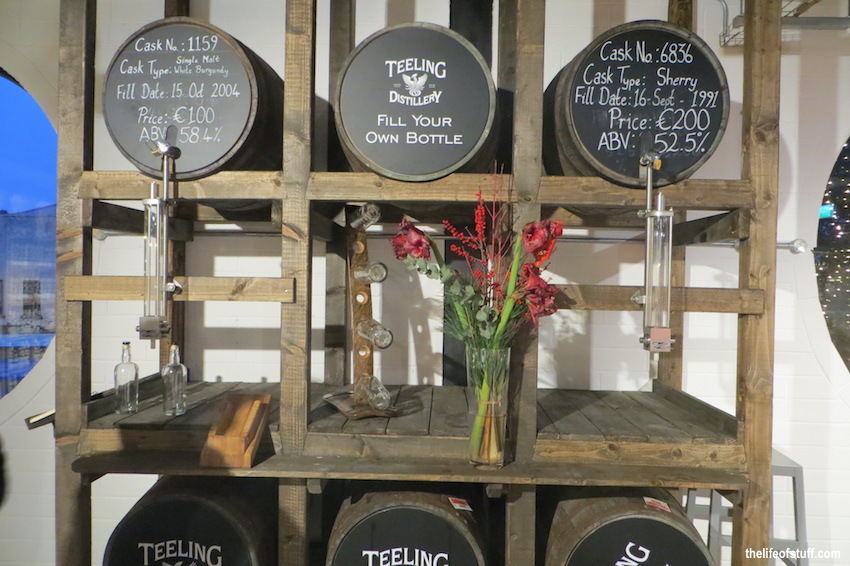 Of course they stock the full range of Teeling Whiskeys and if you fancy it you can even ‘Fill Your Own Bottle’ straight from a cask.

We enjoyed our Teeling Whiskey Distillery experience. As I mentioned we brought Smith our infant son along in his pram, and had no access issues at all throughout the tour. He was happy to nap through most of it, only waking at the end of the tour during our tasting experience, he must have a nose for whiskey. 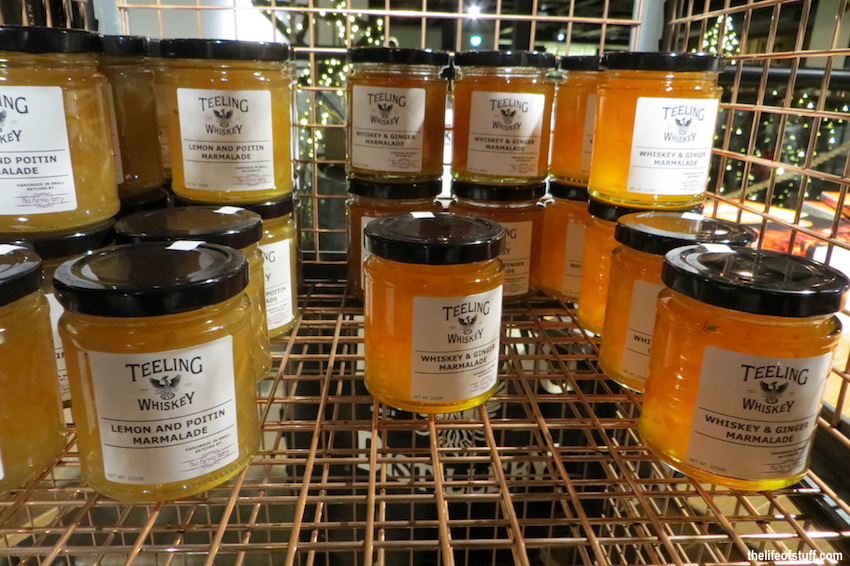 Would I return? Yes, I’d love to experience The Bang Bang Bar with Patrick, but only if we’ve booked a babysitter and don’t need to be home till late.

Love Irish Whiskey? Then you can read about more here in Patrick’s Bevvy of the Week. 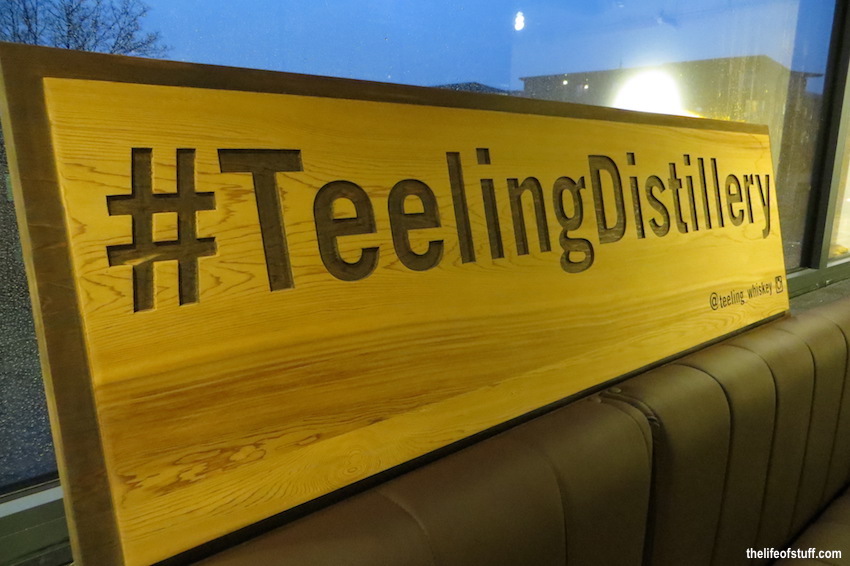 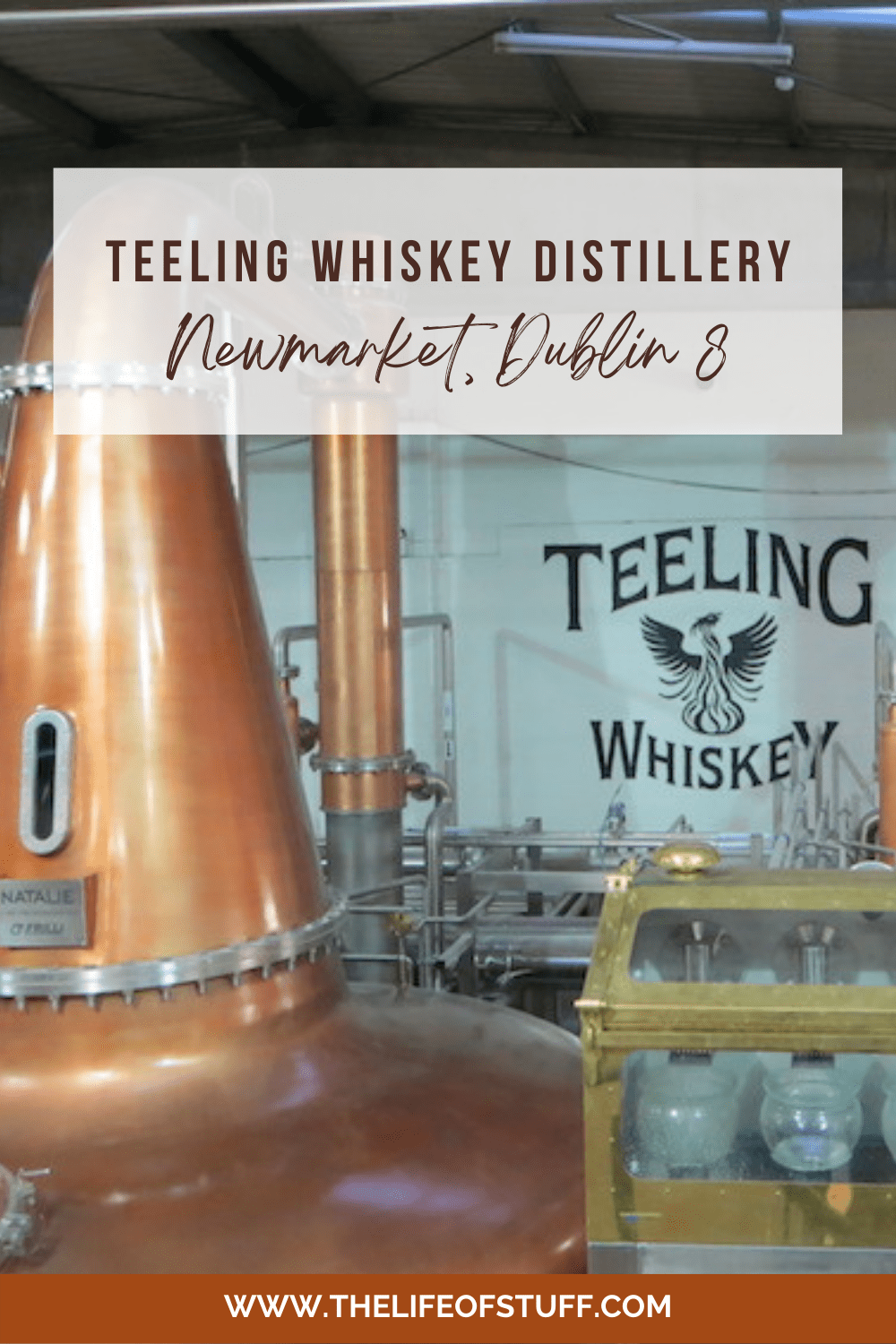 Bevvy of the Week - AND UNION Beast of the Deep