European Cruise Ports – Twenty of the Most Enchanting

Ever dream about taking a cruise? I certainly do. And so when Celebrity Cruises suggested we collaborate I was more than happy to daydream through their website and be inspired to write this post. Take a look at their European Cruises for yourself but before you do, scroll down to feast your eyes on just twenty of the most ‘enchanting European cruise ports you will dream about sailing into’ … in alphabetical order.

With a population of about 20,000 people, Akureyri, the second largest city in Iceland is often called the ‘Capital of the North’. From horseback riding to whale watching, skiing to ‘Beer Bath’ bathing, you won’t be bored in this cultural hub. And along with being the gateway to the spectacular natural beauty that lies in the north of Iceland – such as the Mývatn region, you are also in prime location to witness the magical ‘Northern Lights’.

There’s a very good reason Ålesund is one of the most visited towns in Norway. This magnificent Art Nouveau town with its fjord backdrop, Viking history and excellent seafood is also the starting point for amazing exploration opportunities. Visit the renowned Geirangerfjord, the bird sanctuary island of Runde, and be amazed by the snow-capped mountains of The Hjørundfjord and the Sunnmørsalpene Alps.

Norway’s second largest city, Bergen can be found hugging the mountains and overlooking the sea. If outdoor activities are your thing then you’ll be spoilt for choice exploring the seven mountains surrounding the city and the Hanseatic Wharf. Into food then the fish market is a must. And if your timing is right then you could find yourself celebrating one of Norway’s biggest cultural events, the ‘Bergen International Festival’, which is held each summer.

You’ll find Alicante, the capital of the Alicante province on Spain’s southeastern Costa Blanca. Stroll through the narrow streets of the old town of ‘Barrio de la Santa Cruz’, with its colourful buildings. Take yourself to the medieval ‘Castillo de Santa Bárbara’, for the perfect hilltop views of the Mediterranean coast. And when dusk sets in, enjoy dinner and drinks until the early hours.

From its small fishing village past to its film star present, the affluent resort town of Cannes on the French Riviera has lots to offer. Explore the coastline along the ‘Boulevard de la Croisette’ and walk along its sandy beaches. Go shopping, or window-shopping in one of the many boutiques, wine and dine in the sun. And of course as the town is famed for its International Film Festival, visit the Palais des Festivals et des Congrès, with its red carpet and ‘Allée des Étoiles’. It’s Cannes’ answer to the walk of fame.

The ancient port city of Catania on Sicily’s east coast really is a sight to behold as it sits at the foot of Mt. Etna. If active volcanoes are your thing you can always join a tour that leads up to the summit. Back in the city and the central square, ‘Piazza del Duomo’ offers visitors the Fontana dell’Elefante statue, the Catania Cathedral and the weekday fish market ‘La Pescheria’ which is conveniently surrounded by a number of seafood restaurants – fresh fish expected.

On the south coast of Ireland in county Cork lies the pretty town of Cobh built on a hill looking over the harbour. Known for being the final port of call for the RMS Titanic on her ill-fated maiden voyage, the town, which was then called ‘Queenstown’ now has a heritage centre and ‘Titanic Experience’ dedicated to this piece of history. Take a ramble through the streets, keeping an eye out for the ‘deck of cards’ houses for photo opportunities. Activities to be enjoyed range from water sports to rounds of golf.

The city of Dublin, Ireland’s capital, is a vibrant city bursting at the seams in cultural wealth. From it’s food culture to music scenes, The Arts to architectural delights. Enjoy city festivals, walking tours, its creative quarter, award-winning attractions and museums. Venture out along its river, The Liffey, and along its canals. Visit its harbours, their towns and the beautiful Dublin Mountains.

The city of Dubrovnik in southern Croatia is known for its 16th century stonewalled Old Town. In actual fact it’s an UNESCO World Heritage site. Its historical buildings include its baroque St. Blaise Church, Renaissance Sponza Palace and Gothic Rector’s Palace. The ‘Placa’ is conveniently lined with shops and restaurants. And if you want to see the city and its terracotta rooftops from a height, then the ‘Dubrovnik Cable Car’ is a must.

Found in the south west of Norway, the village of Flåm is renowned for its fjords. It can be found on the bank of the Aurlandsfjord, part of the vast Sognefjord. Surrounded by mountains, waterfalls and valleys this beautifully dramatic scenery is sure to be a sight you’ll never forget. The village itself has a spectacular viewing platform called the ‘Stegastein Viewpoint’. And its Flåm Railway is known as one of the most incredible train journeys in the world. It climbs its way through ravines and waterfalls before reaching its station at Myrdal.

The village of Geiranger in western Norway is known as ‘the jewel in the crown of the Norwegian fjords’. With its fairy-tale landscape at the head of Geirangerfjord, visitors can expect snow-covered mountaintops, stunning waterfalls and lush greenery all from the base of a beautiful deep blue fjord. Take in the spectacular sights by taking to the road, and visit Europe’s highest fjord view from a road, the Geiranger Skywalk, 1500m above sea level.

The coastal town of Kotor on Montenegro’s Adriatic coast is set against the beautiful scenery of Boka Bay in the Bay of Kotor. Surrounded by mountains, the Lovćen National Park, and the sea, it’s no wonder the ‘Old Town of Kotor’ that was built in the middle ages is on UNESCO’s World Natural and Historical Heritage Site list. Medieval architecture lines the town’s narrow streets and squares. And activities outside of the city’s food and entertainment offerings include: beaches, hiking and touring the bay.

Found on the western coast of Italy in the Liguria region, La Spezia is often known as the gateway to Cinque Terre, the rugged coastline of the Italian Riviera. However the city, which is a main Italian naval base, has lots to offer particularly for those who appreciate history. The city has a number of museums, churches, the Cristo Re dei Secoli Cathedral and the Castle of San Giorgio, which offers hilltop views of the city and port. And because it’s Italy, expect great coffee in cafes to watch the world go by.

The port city of Marseille in southern France is France’s oldest and second largest city. In fact it’s regarded as one of Western Europe’s oldest too. Dating back to the classical Greek era, Marseille is a multicultural city that offers visitors a number of tourist attractions. A highlight of these includes Le Vieux Port – the old port, which was the main port of Marseille for over 2000 years. Nowadays the port is a marina lined with restaurants, cafes and shops.

Situated along the resort area of the Côte d’Azur, otherwise known as the French Riviera on the Mediterranean, Monte Carlo is known as a playground for the rich. With its famous Monte Carlo Casino, hilltop Palais du Prince, Avenue Princess Grace shopping district, Grand Prix, and luxurious high-rise hotels – you can spend your time shopping, sightseeing or just relaxing on Larvotto beach.

Located on Ligurian coast, not far from Portofino, Santa Margherita is a beautiful Mediterranean town steeped in history. Explore Santa Margherita’s Castle, which was built in 1550 to defend the town against pirate attacks. Visit the pretty town centre and its streets offering visitors gelato shops, bars, bakeries, and restaurants. Or just bask in the beauty of a walk under the palm trees along the seaside promenade.

Otherwise known as the precious gem of the Aegean, Santorini is the largest island of a small archipelago. Made from an active volcano that exists under the sea, the islands principle towns are Fira and Oia. And it’s the capital city of Fira where cruise ships dock. This picturesque city with its whitewashed buildings with blue highlights, representing the Greek flag are built picture-perfect looking out over turquoise waters. Visit the villages of the caldera – cave-like houses in volcanic soil, enjoy a volcanic spa, enjoy the nightlife or just chill by sea.

The town of Split on Croatia’s Dalmatian Coast is known for its beaches and its UNESCO World Heritage Site – the Diocletian’s Palace. A fortress-like complex the site is one of the world’s most impressive Roman monuments. Split is also the second largest city in Croatia. And so with this comes bustling bars, restaurants and shops. With the turquoise waters of the Adriatic rising up to the dramatic coastal mountains – Split is perfectly picturesque.

The capital of Sweden, Stockholm is truly extraordinary because it’s an archipelago of 14 islands, connected by more than 50 bridges in the Baltic Sea. It is said that to reach Stockholm, a ship will have to navigate the archipelago of 24,000 islands that stretch approximately 80km east of the city! The city itself is culturally alive with a number of tourist attractions inclusive of museums, palaces, amusement park, shopping and dining out.

Did you know that Venice is the capital of northern Italy’s Veneto region? And that it is built on more than 100 islands in a lagoon in the Adriatic Sea? Now you do! There’s more to Venice than gondolas, but of course give one a try when there. Other attractions include Saint Mark’s Basilica, Doge’s Palace, Rialto Bridge and the Bridge of Sighs. And even if you aren’t there for The Carnival of Venice, you can still purchase a venetian mask for memories sake. 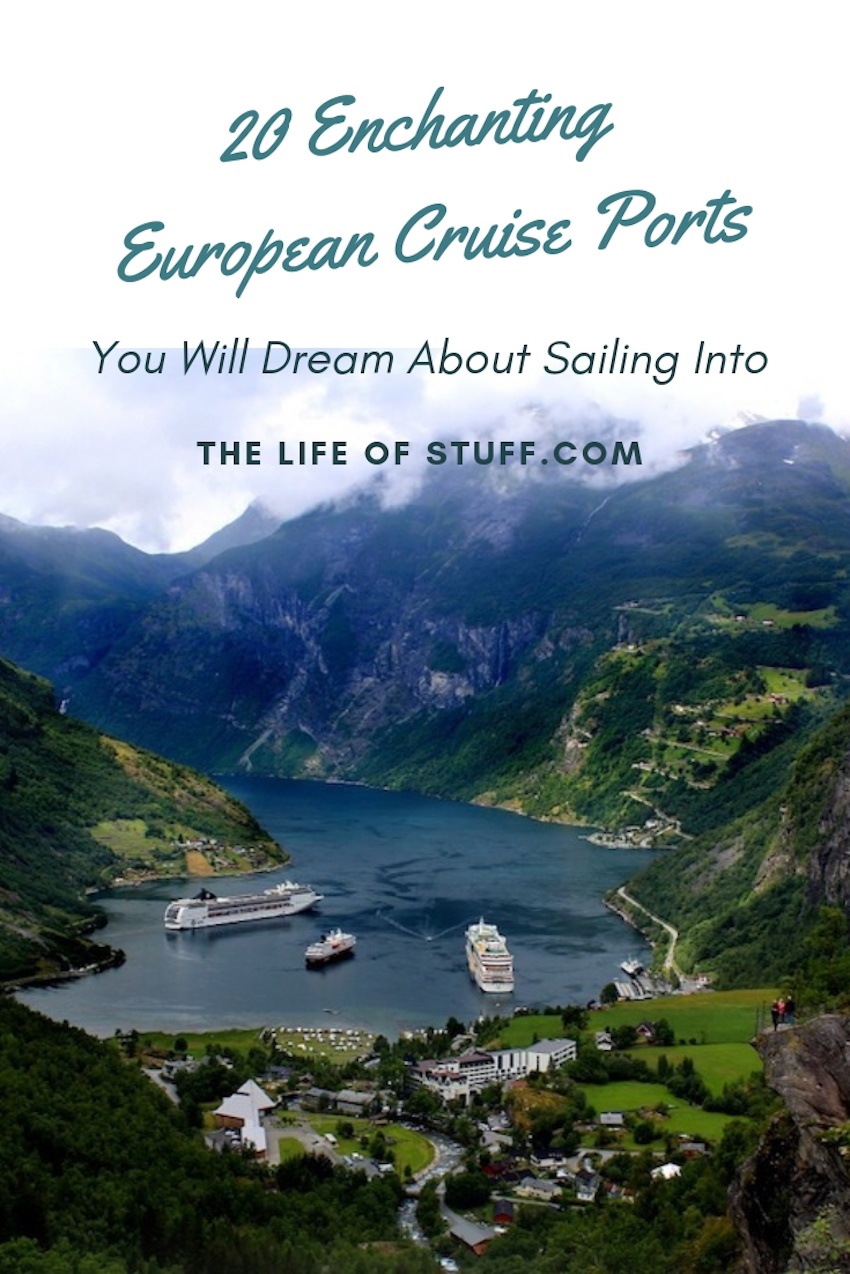 Organic Shampoos: 5 Reasons You Should Be Using Them in 2019

Stay Safe While Camping – 5 Tips for The Great Outdoors