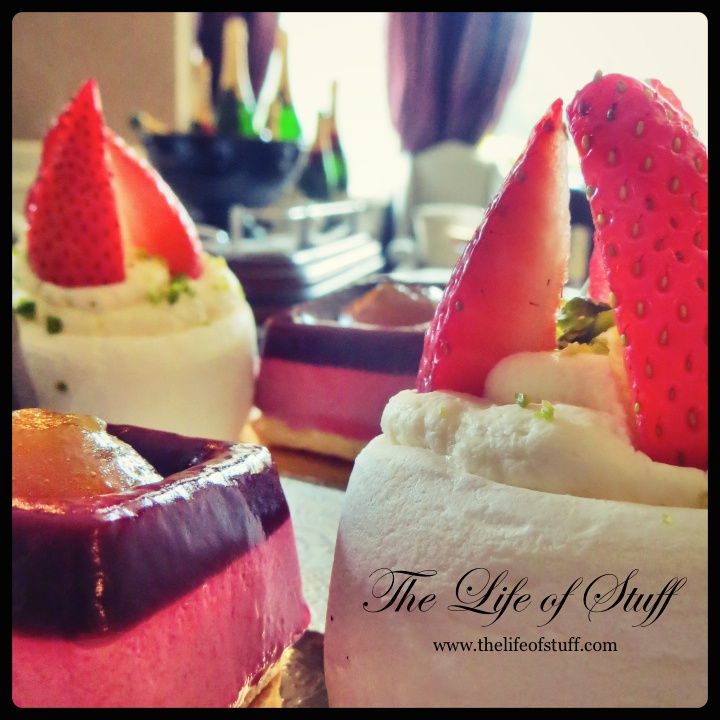 I’m on a mission to taste my way through the best Afternoon Tea‘s Dublin City has to offer and for most of my adventures I’ll be taking my gorgeous hubby with me. It’s terribly hard work as you can imagine, all this wining and dining, I really don’t know how I do it and Patrick I must say endures it well … and if that isn’t sarcasm, I give up on writing. 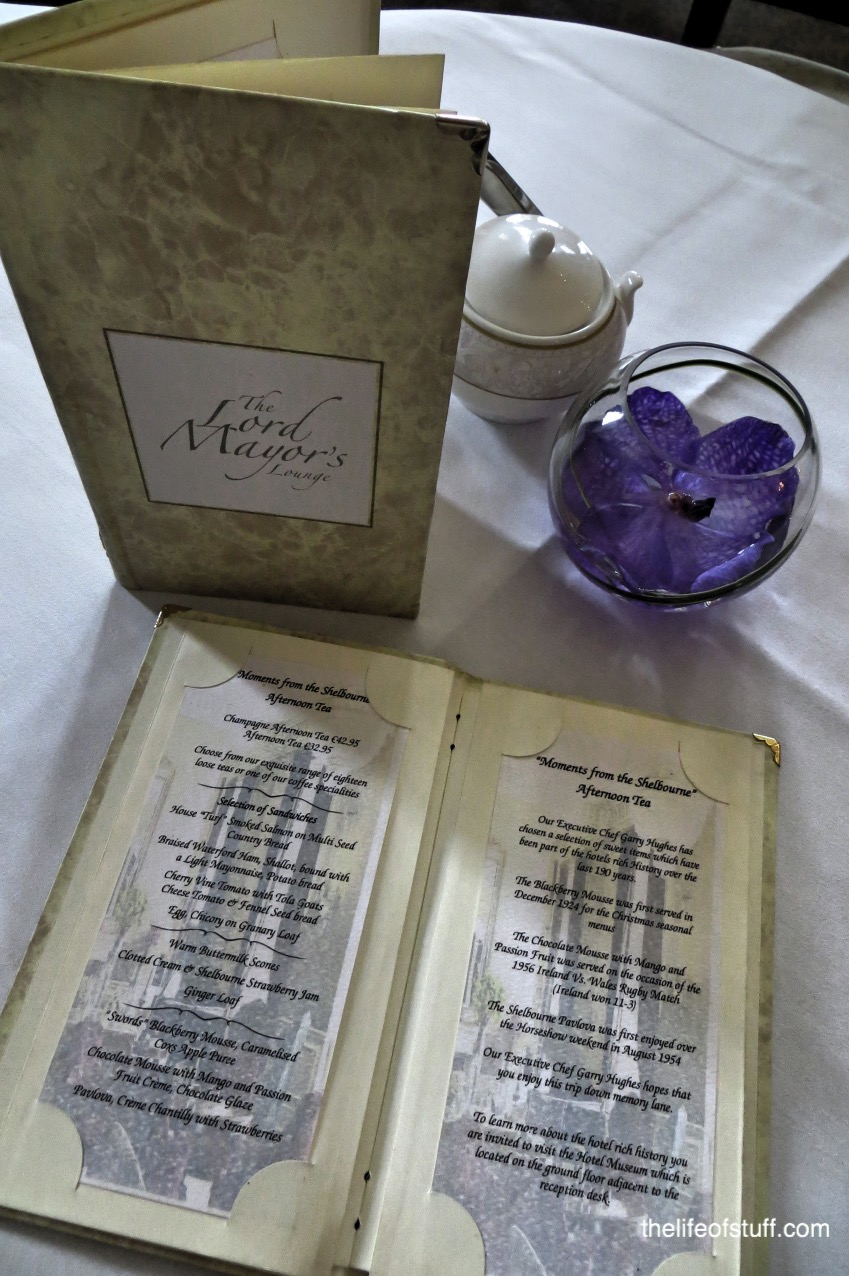 High on the list of places for many who partake in such a tradition and for those who have always thought about experiencing Afternoon Tea, is the Five Star Renaissance Hotel, The Shelbourne. Located just off Grafton Street, with views of the Victorian in style 22 acre park, St. Stephen’s Green, The Shelbourne is deservedly Five Star from the moment your foot touches the steps on entering this beautiful building to your adieu as you leave, but more on that a little later.

Afternoon Tea takes place in The Lord Mayor’s Lounge, which is to the right when you enter the hotel through the main entrance. The lounge boasts of traditional decor, a baby grand piano (which is in use at weekends), an open fire, antique tables and chairs, more modern in style paintings, a few couches, high ceiling and glorious big windows that open onto St. Stephen’s Green. We dined on a Monday and the lounge was quite busy with a mixture of patrons, from couples, parents with adult children, parents with infant children and friends. Our table was reserved that day, something I would advise to save disappointment. 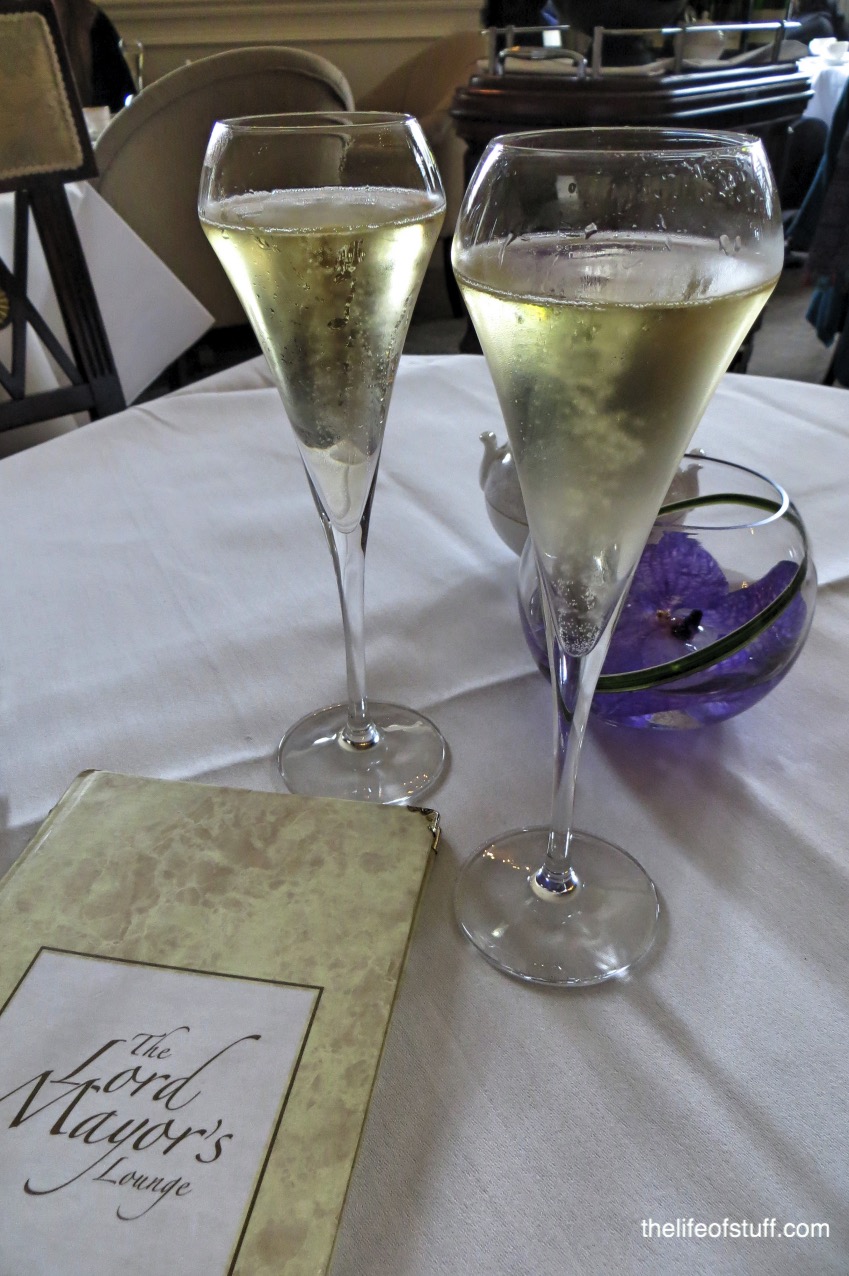 We were greeted and seated and offered a glass of champagne on arrival. The house champagne is Moet, which I had no complaints about and it was served perfectly chilled. We were handed our menus and talked through it. The menu is set, as are most Afternoon Teas, however if by chance you don’t like or can’t eat anything on the menu, alternatives can be arranged. The sandwich selection of the Afternoon Tea menu at The Shelbourne, I was advised normally changes every three months, which by my calculations is every season. The only thing you need to worry about ordering is your choice of tea or coffee … or another glass of bubbly. 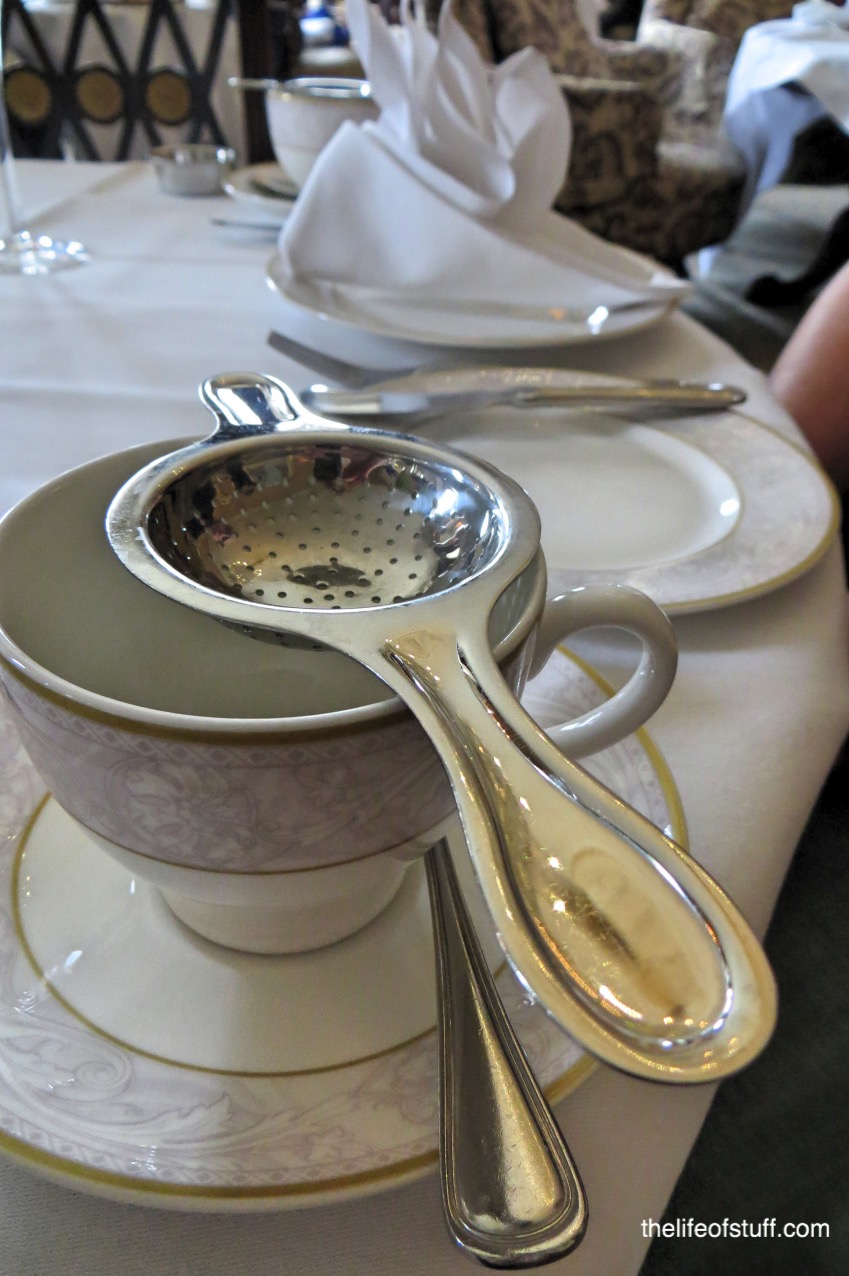 Tea choices were made, I chose the Organic Rooibos Chocolate Chai, which to my surprise was caffeine free and lived up to their menu description of beautifully aromatic. Patrick chose the Organic Lemon Zest, which can be served iced but which he had hot and was zesty and refreshing. 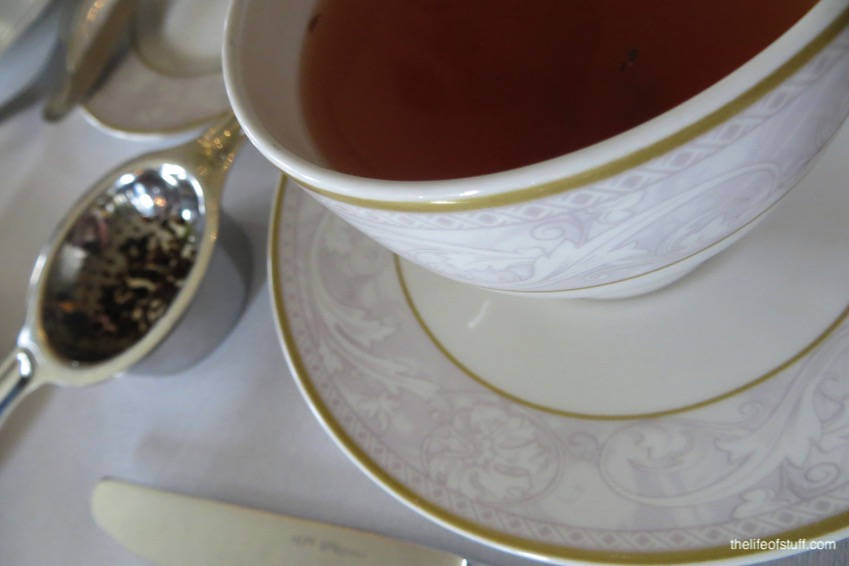 The sandwiches arrived on a rectangular plate and consisted of both open and closed styles. The fillings and toppings were; 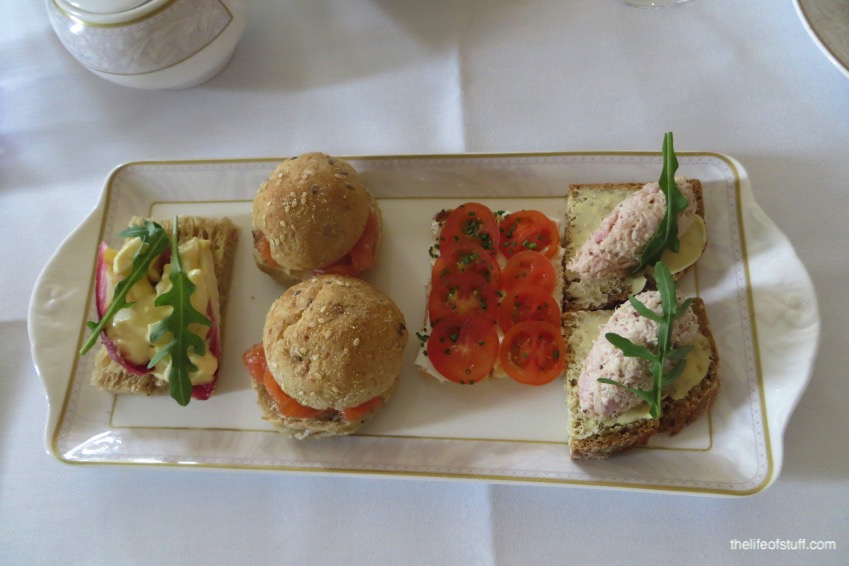 The sandwiches were perfectly made and deliciously fresh. The combinations of flavours for each worked really well together. 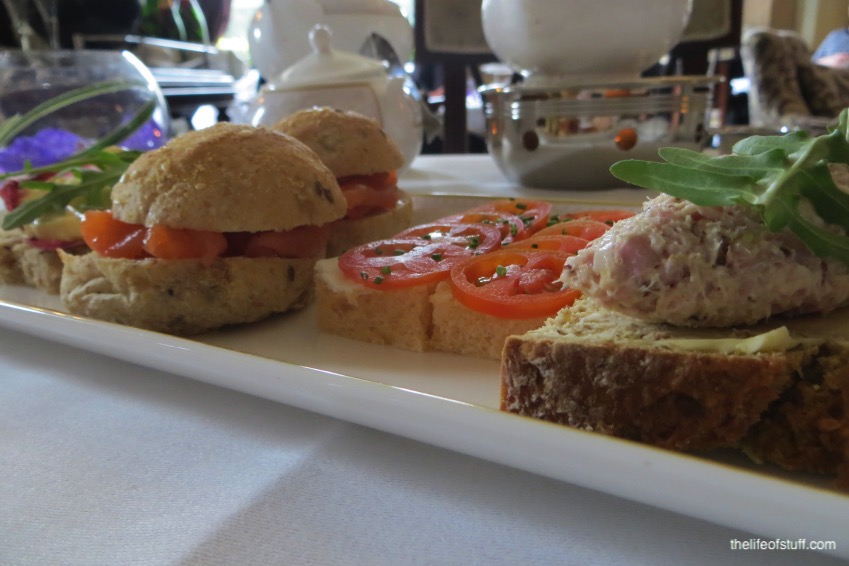 I loved the Turf Smoked Salmon and Waterford Ham selections. Tola Goats Cheese, I could eat until the cows or should I say goats come home. I found the egg on chicory a little playful as it wanted to stray from the bread it sat on, it was delicious all the same and was Patrick’s choice of sandwich. 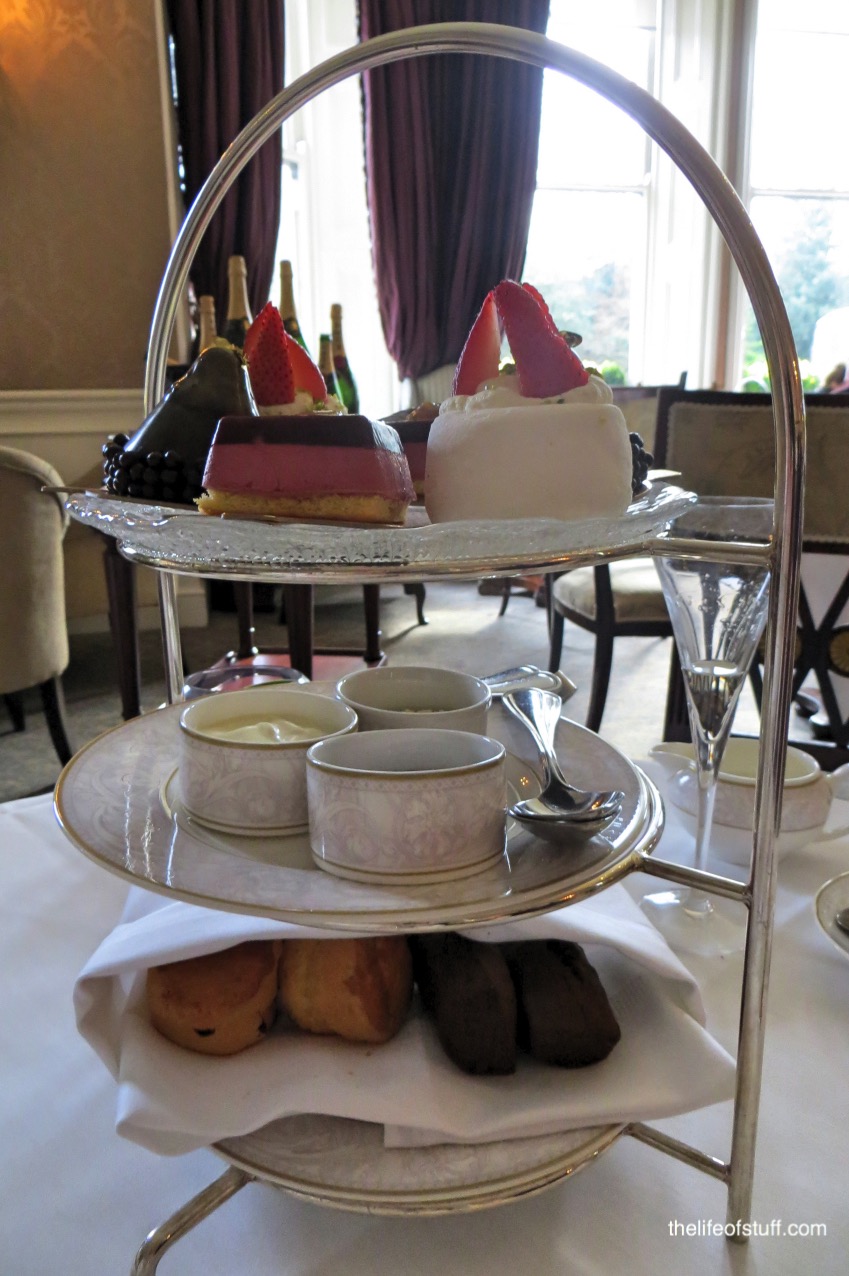 After we had our fill of sandwiches we were offered more tea, coffee and champagne. We both opted for an Americano Coffee and another glass of bubbly each, and sure why not! A little while later our three tier of delights arrived at our table. On the top level the dessert treats stood to attention. On the middle sat the Clotted Cream, butter and Shelbourne Strawberry Jam.  On the bottom level the Warm Milk Scones and Ginger Loaf could be found enveloped like a gift waiting to be opened. 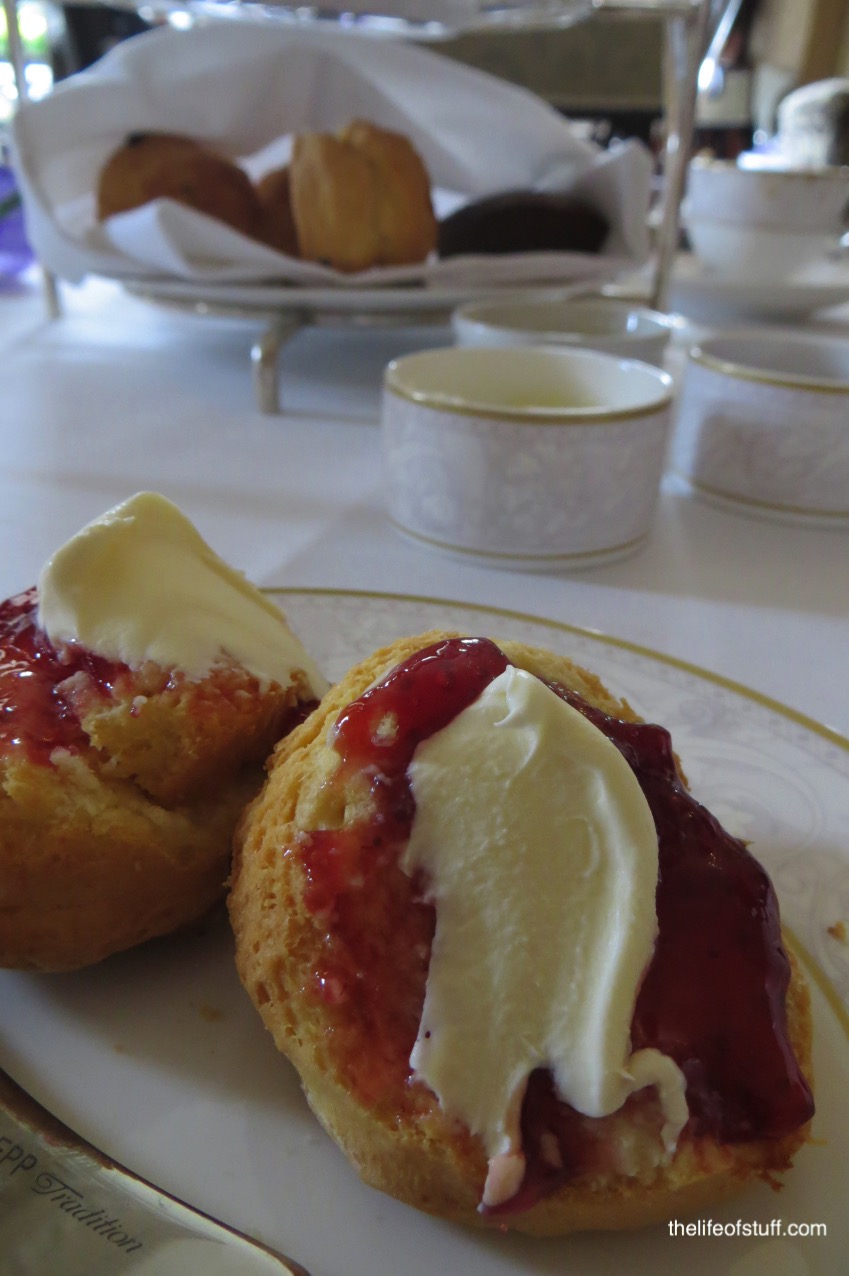 We started with the Warm Milk Scones, Clotted Cream and Shelbourne Jam. Delicious. Next was the Ginger Loaf and it was a nice surprise as I hadn’t eaten it in quite some time and forgot how tasty it can be. 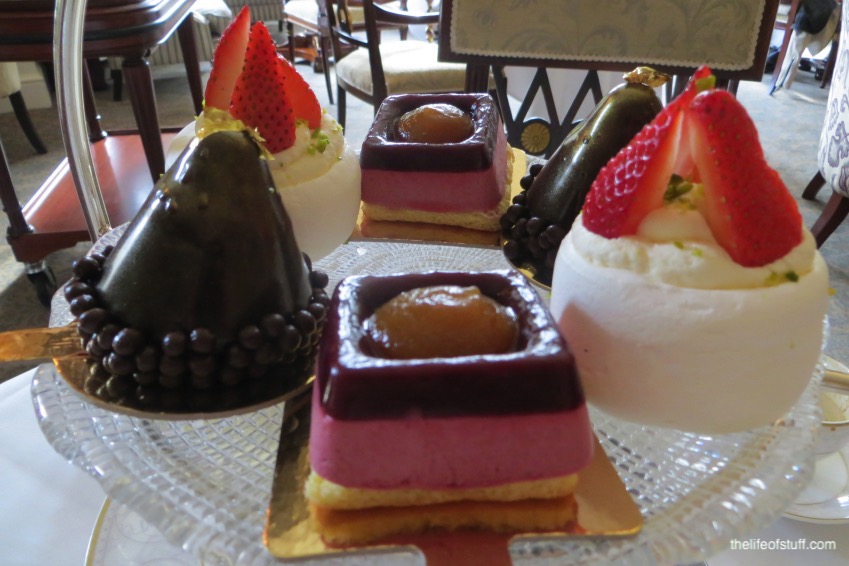 Scones and loaves devoured with only crumbs as a reminder, we sat and appreciated the beautifully created desserts. There were two of each, as there were two of us, a wise idea by far as it wouldn’t befit The Mayors Lounge to have a dessert war on it’s hands. The selections were ‘”Swords” Blackberry Mouse, Caramelised Coxes Apple Puree’, ‘Chocolate Mouse with Mango and Passion Fruit Crème, Chocolate Glaze’ and ‘Pavlova, Crème Chantilly with Strawberries’. Mmmm and here’s the history behind them courtesy of Executive Head Chef Garry Hughes who chose such delights to represent the 190 year history of The Shelbourne Hotel …

All three desserts were delicious. The gold leaf delicately fluttered on top of the Chocolate Mouse which to me resembled a pear but which tasted of creamy chocolate mouse and scrumptious Mango and Passion Fruit Crème. It looked quite rich but was surprisingly light. The Blackberry Mouse which surrounded the Coxes Apple Puree gave the dessert a sweet and sour tingle to your taste buds. The Pavlova was fresh and in my opinion nothing beats a well made fresh pavlova with cream and strawberries, nothing. 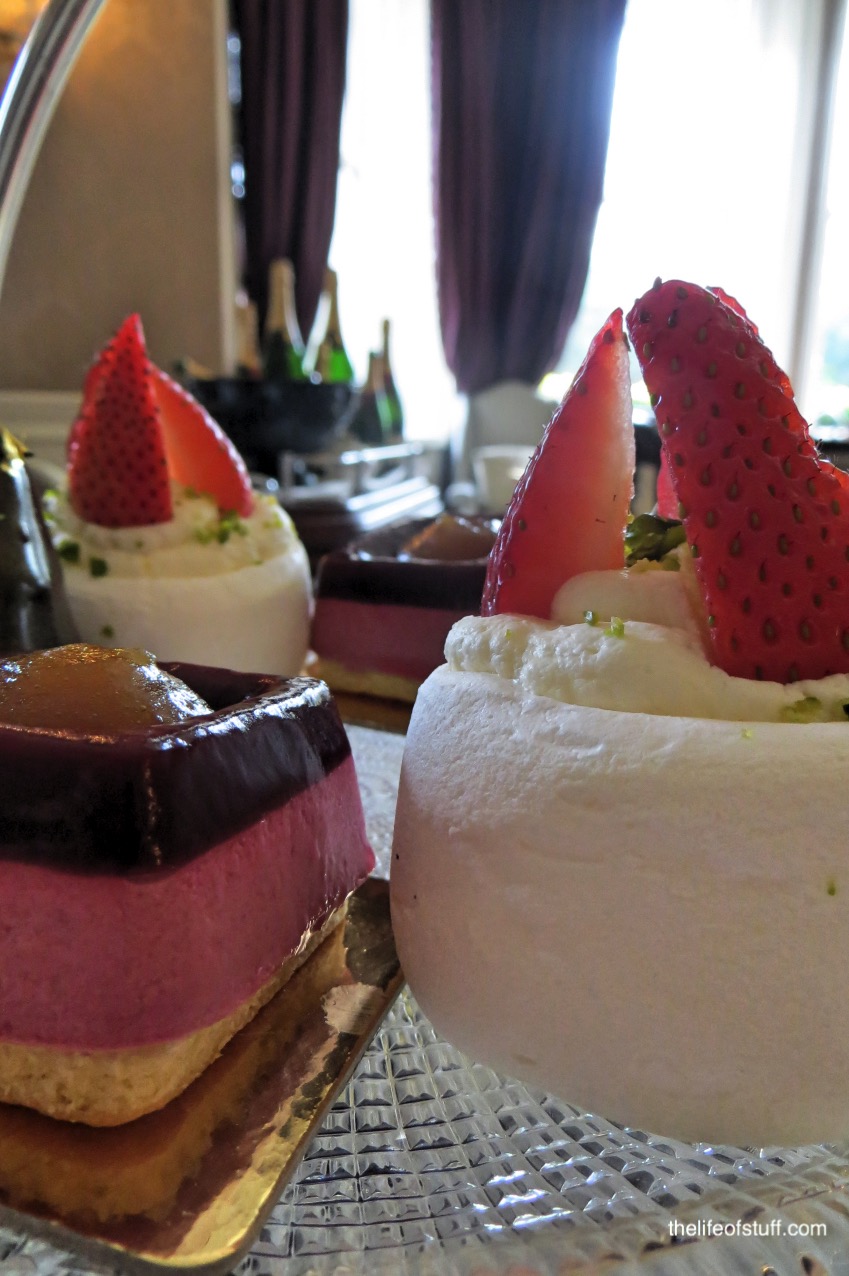 Overall our wining and dining experience of Afternoon Tea at The Shelbourne was a hit. We left The Lord Mayors Lounge with full but not too full bellies about two hours after we had sat at our reserved table. The staff were friendly and polite. The surroundings were plush and traditional but also comfortable. The music that played allowed for a decent chat. The food was delicious. I’ll definitely return and recommend it. 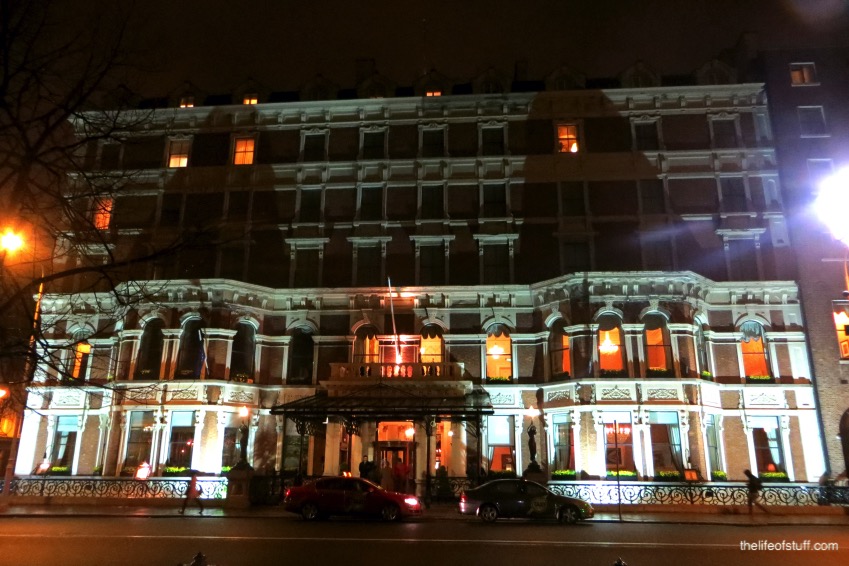 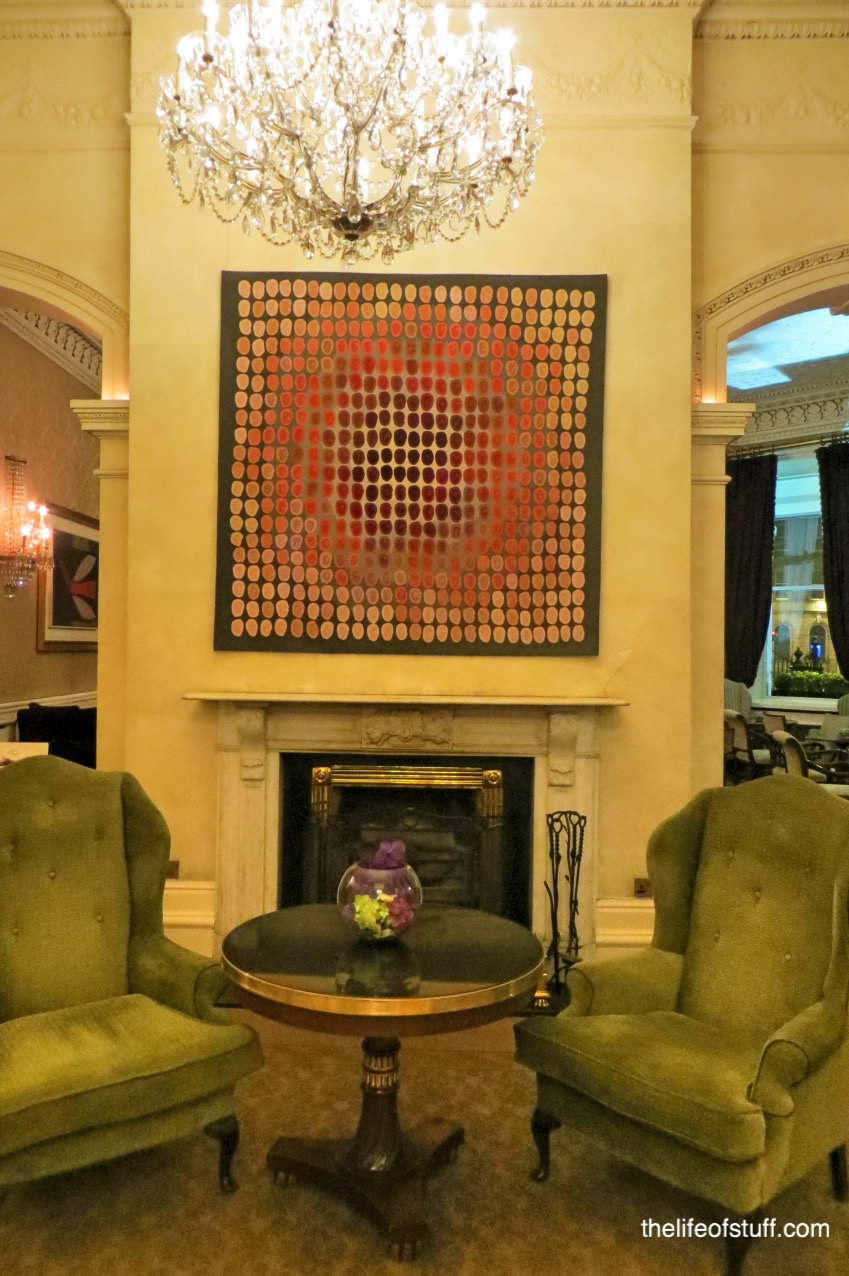 … And finally a fact that you may find really interesting is …

For more information, bookings and to connect with The Shelbourne Dublin, A Renaissance Hotel, visit their website here

Bevvy of the Week - A Refreshing Elderflower and Gin Cocktail