When the opportunity arose to fly to London to witness the multi award-winning Billy Elliot The Musical at the Victoria Palace Theatre and interview Jon Finn, the musical’s producer, I welcomed it with open arms, passport in hand. 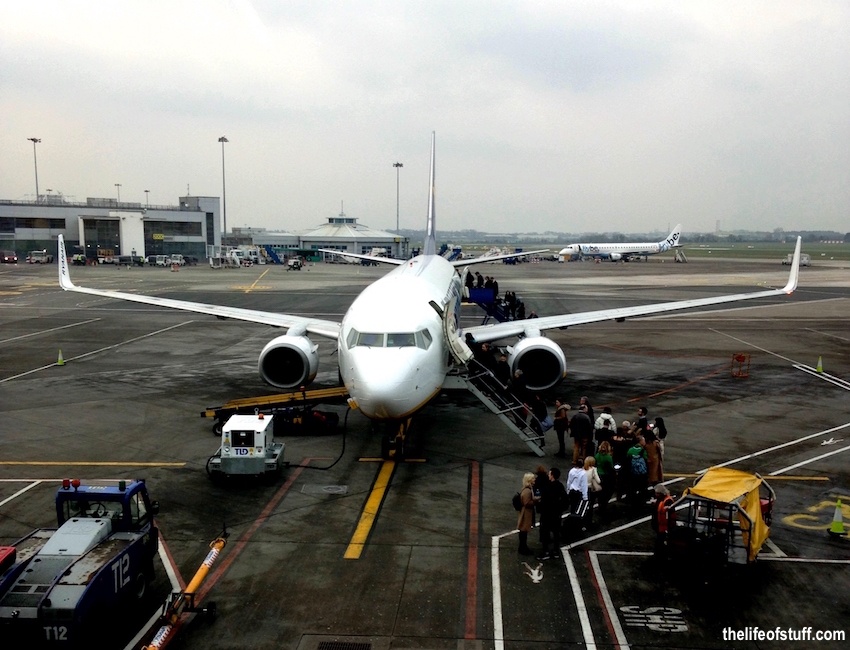 I loved the Billy Elliot film and with the musical produced by Jon Finn who also produced the film nearly 17 years ago, there was no doubt that I was in for a treat. Sure how could over 10 million people across five continents be wrong? … the UK, Canada, North America, South America, Australia … sure 2010 saw its first foreign language production in Seoul, South Korea! … and now after 10 years Billy Elliot The Musical is coming to Ireland! … and having witnessed it, it’s about bloody time too. 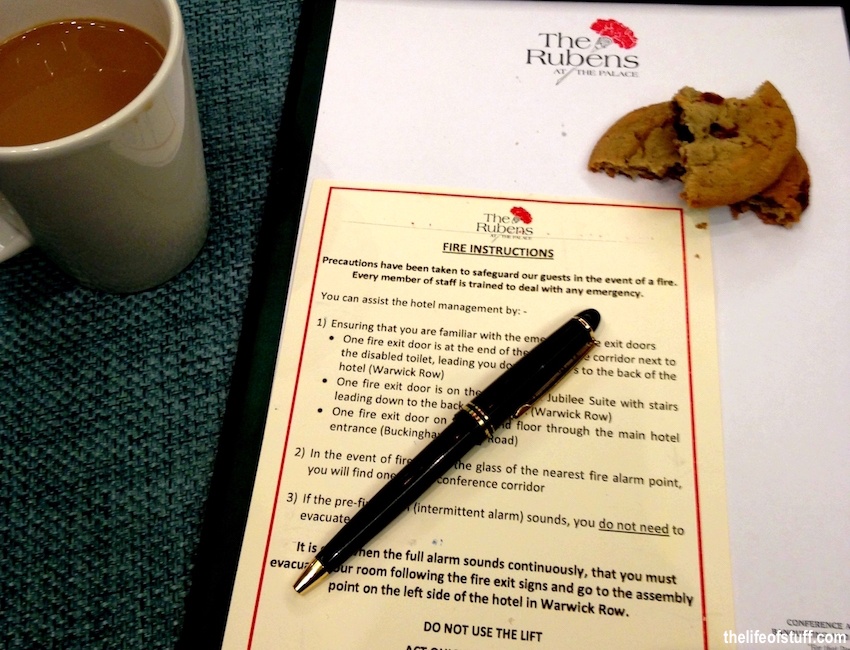 Brought to life by the award-winning team behind the movie, Lee Hall (book and lyrics), Stephen Daldry (direction) and Peter Darling (choreography), joined by the legendary Elton John (music), Billy Elliot is an extraordinary theatrical experience that has captivated audiences around the world. After 10 exhilarating years on stage, we are delighted to finally bring Billy Elliot to theatres across the UK and in Ireland. (billyelliotthemusical.com) 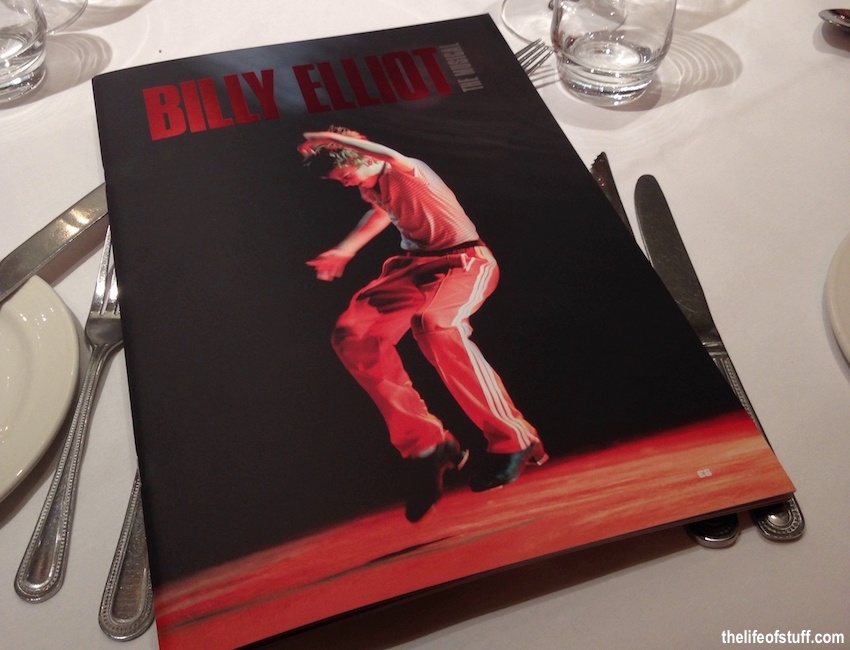 Using your 11 month old son as an alarm clock isn’t such a good idea when you have an early morning flight. That morning he must have pressed his own snooze button because it was a dash to the airport to meet my Billy Elliot The Musical buddies for the day. I made it on time, thanks to my hubby and boarded the flight to London. When we landed, we had a coffee and a chat, and boarded a bus that took us to the centre of London to Reuben’s at the Palace Hotel on Buckingham Palace Road. It was here that we enjoyed a delicious four course meal (avec vin), got to know each other (my fellow press/online Billy Elliot The Musical virgins) but more importantly got the chance to meet and talk with Jon Finn the musical’s producer. 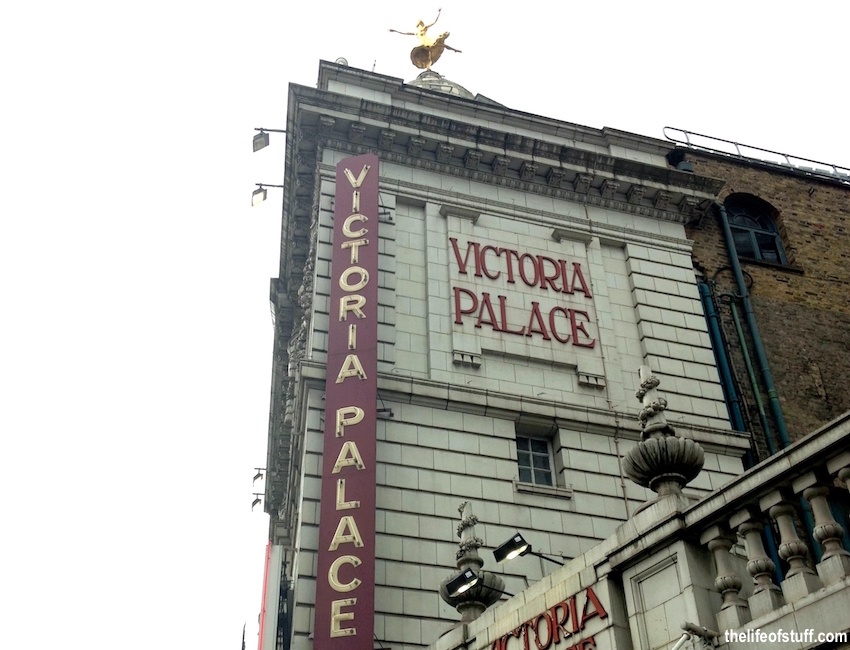 I was part of an intimate press group who interviewed Jon. We only chatted for 25 minutes but you can learn a lot about about a person in that time, especially when it’s you asking all the questions. Jon’s grandparent’s were miners so the story behind Billy Elliot is very special to him and allowed him to produce work that ‘transports you emotionally at its best.’ Jon came across as a really sound guy, down to earth, chatty, an open book and humble. He gave us a great interview, full of insights into the film from the ‘invincibility of an 11 year old’ to it’s ‘world class ballet dancers’. He gave us insights into the musical, why it has such important messages that include ‘pride’, ‘hope’ and ‘something to fight for’. He tells us why he is looking forward to bringing it to Sunderland where some of his own relations haven’t seen it yet, and why he’s excited about its arrival in Ireland. What’s more exciting is that Jon believes this tour is the ‘best production’ they have ever done, and Ireland gets to witness it at its best! For more on the interview, have a listen here:

After the interview with Jon was over (and after he signed my Billy Elliot The Musical programme that weighs the same as a small child), it was a short stroll to the Victoria Palace Theatre on Victoria Street. 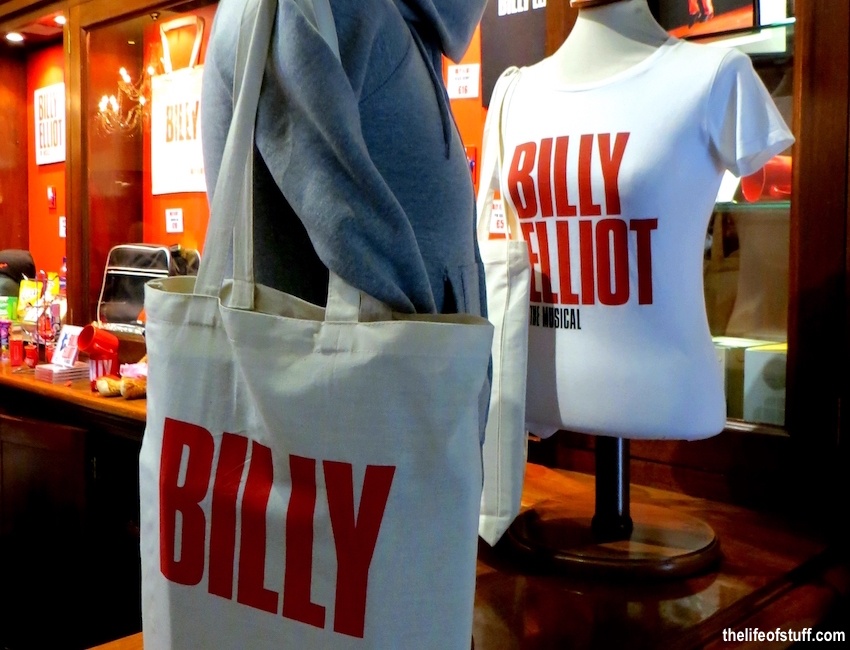 The place was packed by the time we got there, and there were still people queuing to get in, but we were on time to order drinks for the interval and be shown to our seats. It was great to see families and groups of friends occupy the seats looking just as excited as I was. Then the lights dimmed on the beautiful old theatre and the musical began. 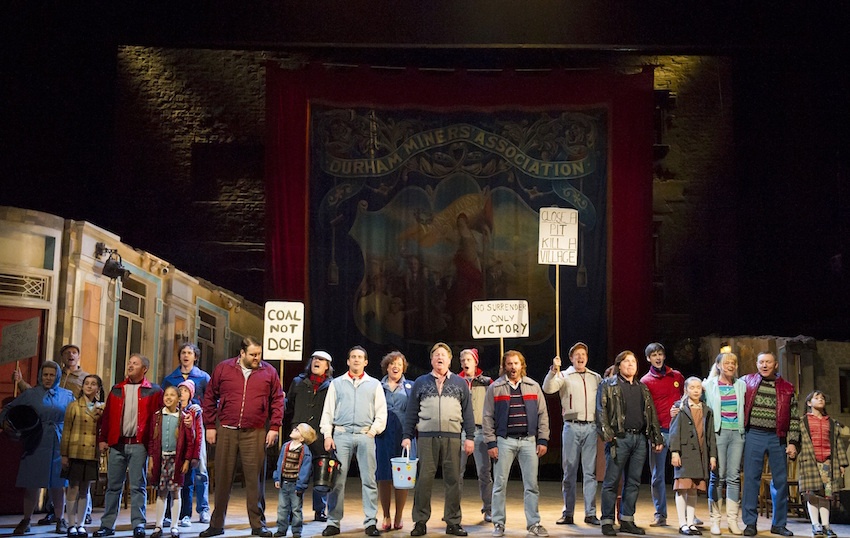 Here’s something you might not have even thought about before you became interested in going to see Billy Elliot The Musical … there are in fact four Billy’s, three Michael’s and three Debbie’s! It makes sense when you do think about it, and when you see the show you’ll understand why they are needed. The energy and passion needed for such roles makes me tired even thinking about it. With auditions open to all boys and girls who are in or around 10/11 years old, only those with the true ‘Billy’ (or Michael or Debbie) spark make it through, and with thousands of pounds worth of tutoring and lessons given to all of the show’s boy and girl performers, you will witness why the musical is so popular and why it has won so many awards, worldwide. 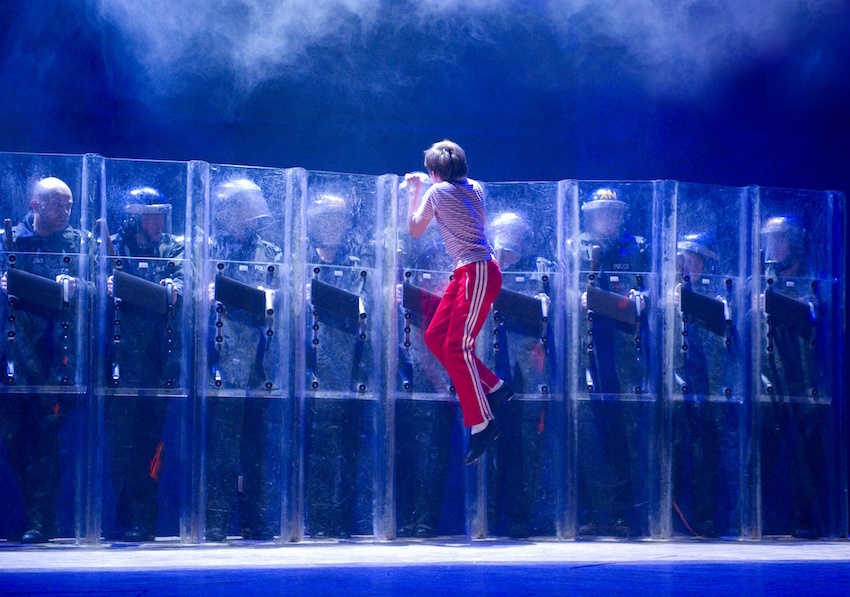 On the day we witnessed the musical, Thomas Hazelby played the role of Billy and Ben Robinson played Michael. Theatre and T.V. star’s Ruthie Henshall played Mrs Wilkinson, not Julie Walters as I kept referring her as, and Deka Walmsley, played the Dad. Gillian Elisa played the Grandma and Matthew Seadon-Young played Billy’s brother Tony. Of course there were many more stars on the night but you will have to witness the musical yourself to find your favourite. 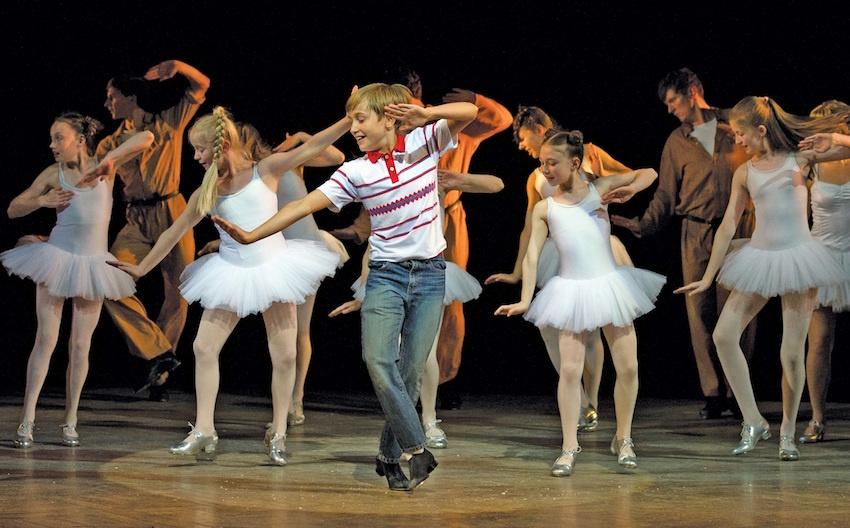 For me Billy, Michael and Julie … ahem Mrs Wilkinson were the stars, as the story unfolds you warm to Billy’s Dad too, who really shows his true colours but not before it’s too late. They were believable and their talent shone through, both in their acting skills but also through their talented dance skill and agility. Billy made me cry and Michael made me cry laughing (he won my heart). Mrs Wilkinson was the teacher you always wanted. 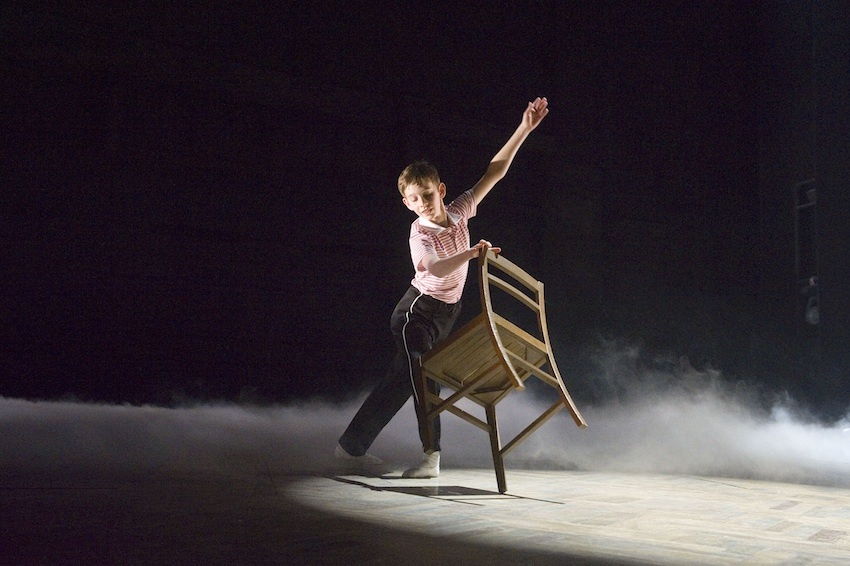 After the show, we were treated to a tour behind the scenes, back stage, and on the stage. We got to get up close and personal to the amazingly creative set that had captured our imaginations and helped steal our hearts minutes earlier. Then it was dinner and a flight home. Tired but very happy. 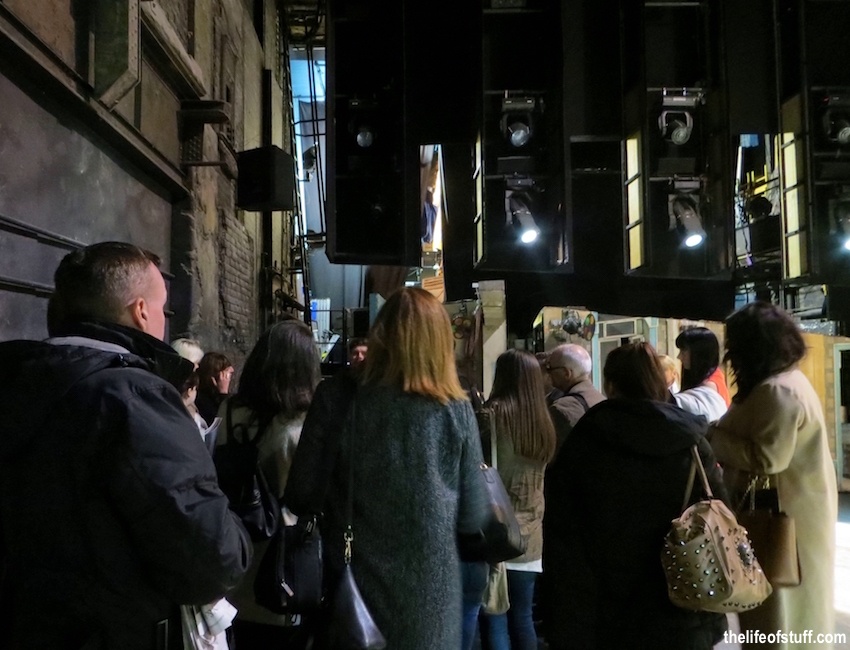 Billy Elliot The Musical is coming to the Bord Gais Energy Theatre Dublin for the first time as part of the UK and Ireland Tour. Having witnessed it I can’t recommend it enough, as in I truly recommend it. It’s suitable for old and young (although there are a few ‘naughty’ words thrown about, its all part of the fun, the laughter and the emotion). I laughed out loud throughout the show, and I cried twice. I’d go see it again, and that’s saying something for me because I’m easily bored – not the best trait to have but at least I’m honest about it. If you’ve never been to a musical before, Billy Elliot will make a great introduction … the only problem is that it’ll be very hard to beat!

For more information on Billy Elliot The Musical or to book your tickets visit the Bord Gais Energy Theatre at bordgaisenergytheatre.ie

Essential Tips on How to Get Fit on a Budget