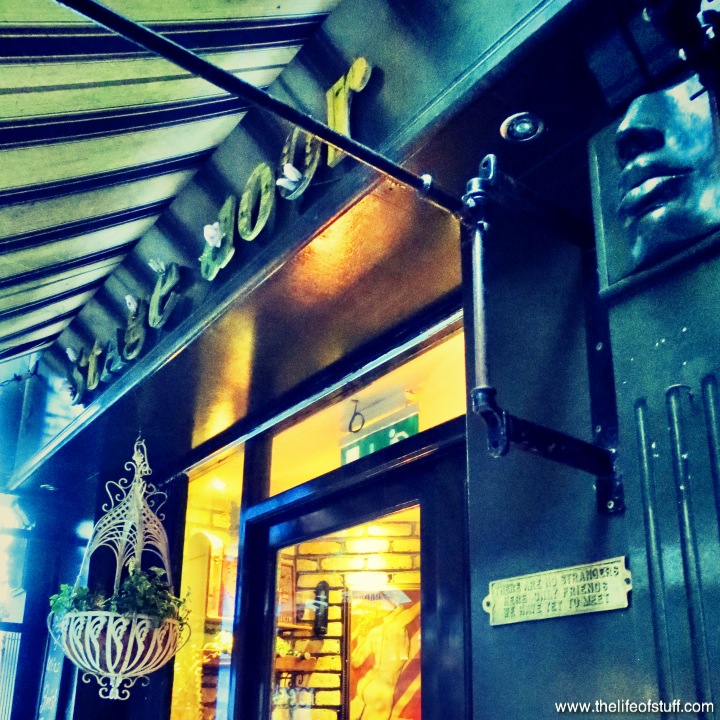 There are no strangers here only friends we have yet to meet.

On Saturday I was up at the crack of dawn, okay that’s an exaggeration, I was up relatively early considering I wasn’t in work. I was fresh as I hadn’t bothered with a beverage of an alcohol nature the night before and I had a plan to go into Dublin town and explore a little. As soon as I got up I checked the weather outside, thinking that with my good mood must come good weather. Nope. It was bucketing down and it didn’t look like it would stop very soon. Not letting the weather dampen my mood (see what I just did there) I headed off into the City Centre. No coffee nor breakfast in my belly as I wanted to treat myself and dine out. I hadn’t made plans to meet anyone. I hadn’t plans on where I wanted to go. I just let my feet do the walking and where they stopped was the Stage Door Café. 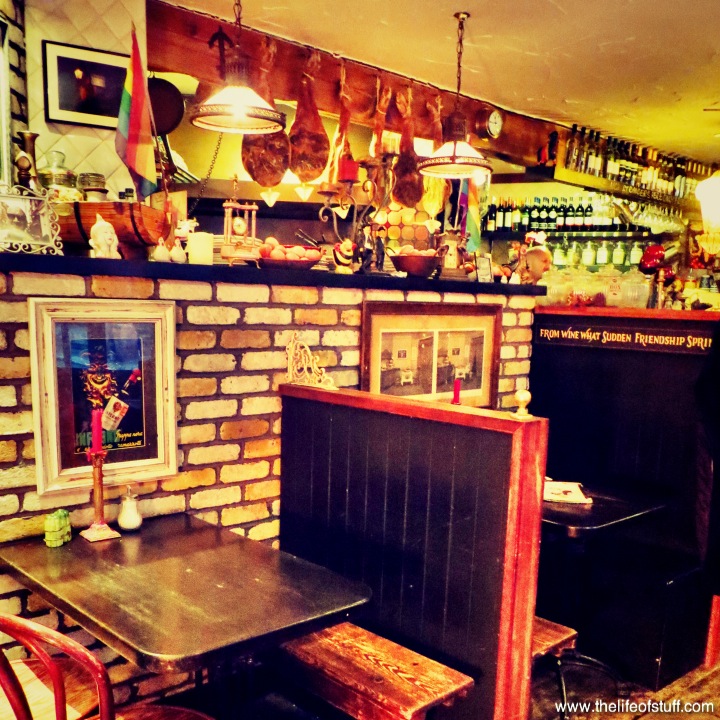 I’d been to the Stage Door Café before for coffee with friends on previous occasions. Sitting inside in one of the booths but mostly outside watching the world go by but these had always been at later times in the day. I also realised when I walked up to the café that morning, I’d never actually eaten there, it had always been coffee – which might I add they do very well.

Outside the Stage Door Café you will find a handful of tables and chairs which look out onto the Temple Bar District and which get the sunshine for most of the day during the summer months. In rainy weather these are under the protection of a large canapé which keeps them and those who sit on and at them dry. On Saturday, I was warmly greeted when I entered the café and I sat in one of the booths. The one that says ‘from wine what sudden friendship springs’ (English Poet and Dramatist, John Gay). 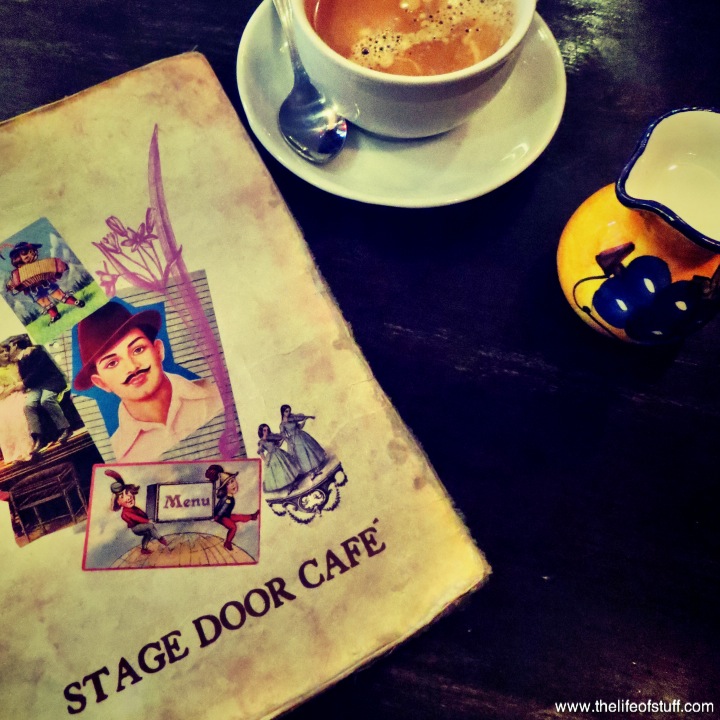 A menu was brought to the table by Manu, who I was later introduced to and who also cooked my breakfast. I was asked if I’d like a drink. I ordered coffee, why break the habit of what will be a lifetime and it was brought to my table moments later. In the time between Manu had taken my order which was to be a cheese and mushroom omelette. I was tempted to go for the fry but resisted and to be honest I’m glad I didn’t see the photo they’d put on Facebook a little earlier of one as the quote ‘I can resist everything except temptation’ would have rang through. 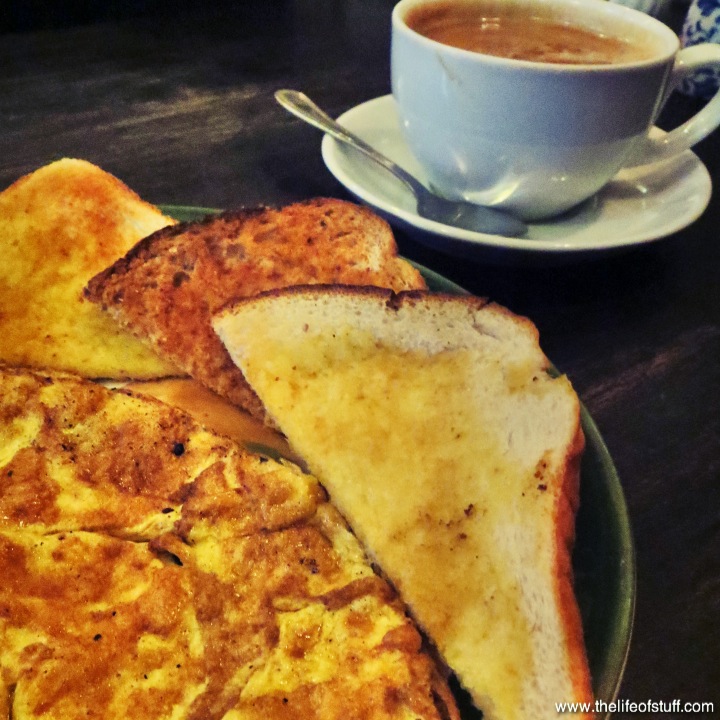 As Manu cooked up a storm in the kitchen, the lively, cheerful and friendly owner Alan and I started to chat. He’s a bit of craic, I really like his energy and there’s a reason why his name is above the door ‘Al’s Stage Door Café’ it’s because he works it. We talked about the decor which he advised nearly all came from charity shops, the famous actors and musicians that frequented the café. We talked about how he sponsored the decorations for Gay Pride last year, his three dogs, the massive dishes they cook up outside the café and briefly on how times have changed. 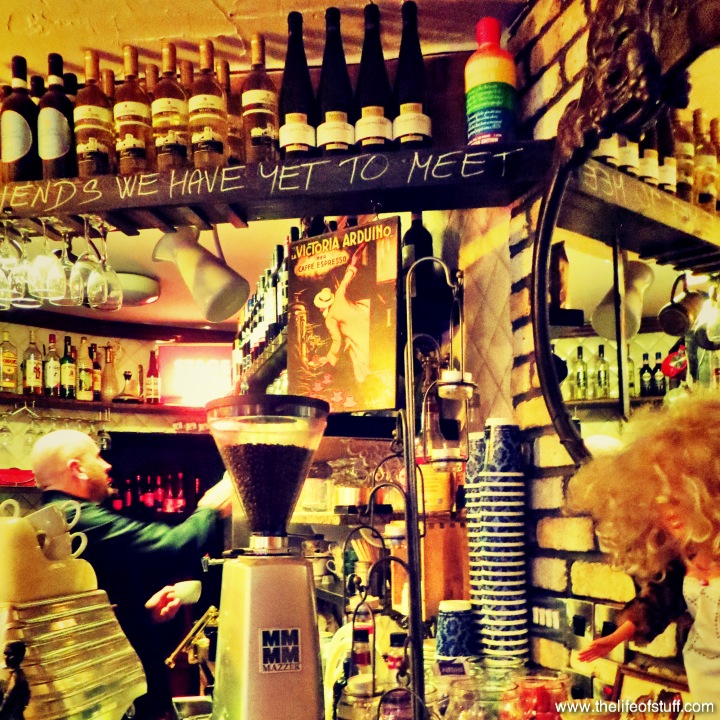 I nearly always ask if I can take photo’s when I’m out and about. When I asked Alan who was busy behind the counter organising glasses and what not if it was okay, I was advised that it is probably the most photographed café in Dublin … and you know what, he’s probably right. I took a few photographs and sat down for my breakfast. The omelette was really tasty, seasoned well, with the right amount of cheese and mushrooms for my liking.  The toast which accompanied it, one brown slice and one white was quite light and an added bonus as it wasn’t on the menu. The coffee €2.75 as I mentioned is always good. At €8.95, this meal was good value although my initial thought was it was a little bit pricy considering the fact that for an extra €1 you can get a full Irish fry! … but I didn’t factor in the added toast and from observation omelettes in most café’s are often more expensive. 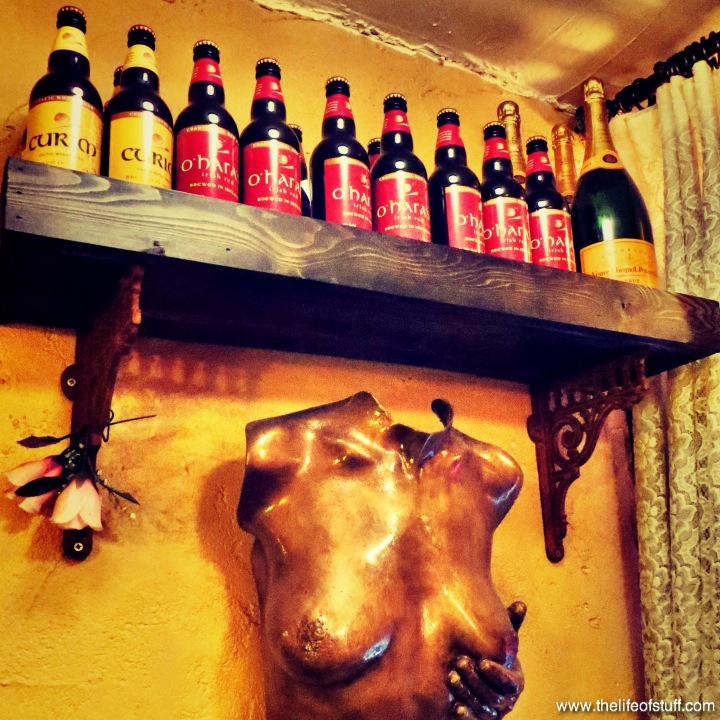 I’ll always return to Al’s Stage Door Café. For the service, friendliness, the energetic buzz AND free lollipops. The decor is funky, old school, new school, comfy, fun. The seats outside are great, the booths are intimate. The lighting isn’t harsh, the ambience is relaxed and a little electric and eclectic at the same time. I really did enjoy my breakfast, my compliments to Manu for the food and Alan for the entertainment. It would be nice to be able to get an omelette and coffee breakfast for no than €10.00 but that’s just my opinion. I do want to try more from the menu particularly their delicious looking cakes. It’s in a great location for any trip into Dublin City, whether you’re shopping, going to a gig or going to a play. If coffee isn’t strong enough, you could always go a little stronger as they serve booze too 🙂

Best Beauty Buy in a While - The Emjoi MICRO Pedi