If you’ve been lucky enough to visit Asia you’ll have many a happy memory of swigging on a Tiger Beer whilst lazing on the beach or bopping in a Club. If you’ve dined out in an Asian Cuisine Restaurant on your return to Ireland, I bet you were happy to see Tiger Beer on the menu as it gave you a chance to taste that little bit of sunshine. I bet you didn’t expect to see it available later on at the bar or in the club after, but it was there, waiting for you. That’s because since it was first brewed in 1932, Tiger Beer has been following it’s instincts and has followed its fans worldwide.

Tiger is a cool beer with a cool reputation and there’s no better way to express this coolness than it’s instinctively good taste when it comes to creating advertisements that capture your imagination. Just check out their latest addition (soundtrack is ‘It’s Voodoo Working‘ by Charles Sheffield)


… but the fun doesn’t stop there and Tiger have created a unique Interactive Facebook Experience where you get to listen to the cool tune ‘Beat and the Pulse‘ tune by Astra and where you are asked to Follow Your Instinct to find the girl with the Tiger Tattoo … sounds intriguing? Well it is. I’ve already played and found the girl … It will only spoil the fun if I tell you what happens when you do! 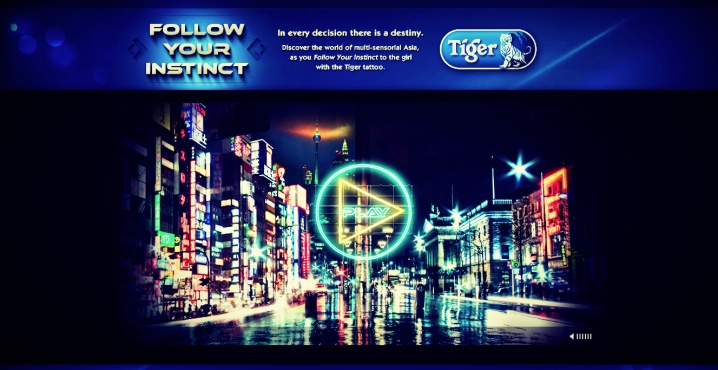