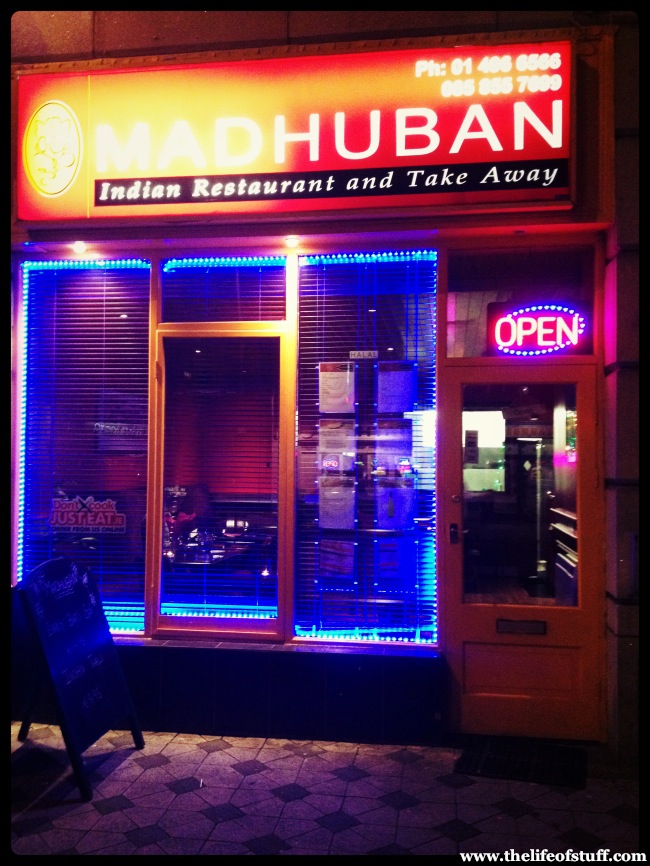 Patrick and I love Indian cuisine and on our way home the other night, dinner-less, Patrick had a goo for some. Maybe it was all the chat about it being the Diwali Festival that jolted his yearning. We hadn’t booked a table anywhere and it was starting to get a little too late to start making big plans, plus we both had work the next morning so when we spotted the bright lights of Madhuban on the Lower Rathmines Road, we investigated. The board outside read:

Not very much information there. I don’t know whether the idea behind having such a secretive ‘Early Bird’ chalked on the board outside means prospective customers will have to actually step inside to find out what it is but it worked as Patrick drew the short straw and went in to investigate. He returned with the following information; that the Earlybird for €14.95 is a Two Course Meal and includes a choice of any Starter, any Main & is served with Rice or Plain Naan Bread. The Indian Thali is a the Madhuban Set Thali and is a meal made of a selection of dishes. Our stomach’s were set on the Two Course Meal and our minds were set on the price, so we decided to go for it. Anyone who likes Indian cuisine, could tell you that, in Ireland, €14.95 is pretty good value for a two course Indian meal …especially when dining out … but only if it’s tastes good, that goes without saying.

Once inside the door we were greeted by a pretty waitress who allowed us choose our table. It was quiet at the time, apart from a family of four and a solo diner. We chose the table near the window. The restaurant is small but it’s clean and the decor is smart, simple and includes some lovely framed prints. There is a window to the kitchen but it was too far from me to have a look in and I didn’t feel the need to. Under the window to the kitchen and next to the toilets there are a number of chairs for people to sit on while waiting for their ‘take-away’. This seating area got a lot of use throughout the night and Madhuban seems to be the peoples choice when it comes to ordering, collecting and delivery. It was a good enough sign for me while I sat and read over the menu. 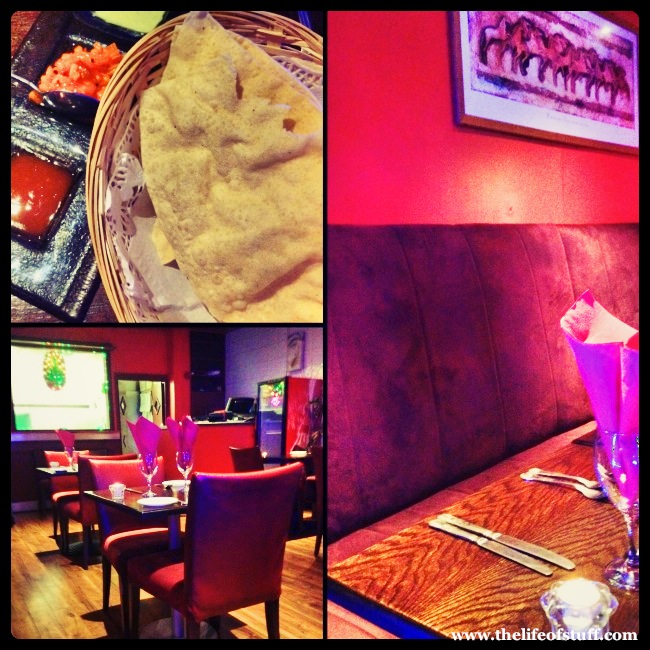 When Patrick and I order in an Indian Restaurant we always choose our own main meal but share them. It’s a great way to try new dishes and it also means that dependent on our culinary moods we can choose one spicy dish and one not-so-spicy dish, just to keep the balance. That night we ordered the following … and I have quoted the restaurants descriptions and their Á la Carte prices at the time, so you can see where the savings were made on our Early Bird selection …

Sheek Kebab – Minced lamb rolled on a skewer, flavoured with Indian herbs and cooked in a clay oven. €4.95

Laal Maans – A feiry dish of lamb cooked with butter and spices with red chilli in a onion tomato base sauce. €14.00

The main meals came with a choice of Rice or Naan. Initially we were going to order two portions of rice and pay extra for a Naan, however we decided to order one Rice and one Naan and then order extra if we needed to. On the menu the Pilau Rice was priced at €2.50 and the Naan Bread at €2.00.

Honestly, neither of us were impressed with our starters. My Onion Bhaji looked the part and they were lovely and big but they lacked in taste and were almost eggy. Patrick was really surprised with the presentation of his Sheek Kebab, not because it wasn’t presented on a skewer, they rarely are, but because it was covered in a sauce that tasted more Italian than Indian. Neither of our plates were hot which meant that the food got cold very quickly. Not a good start. 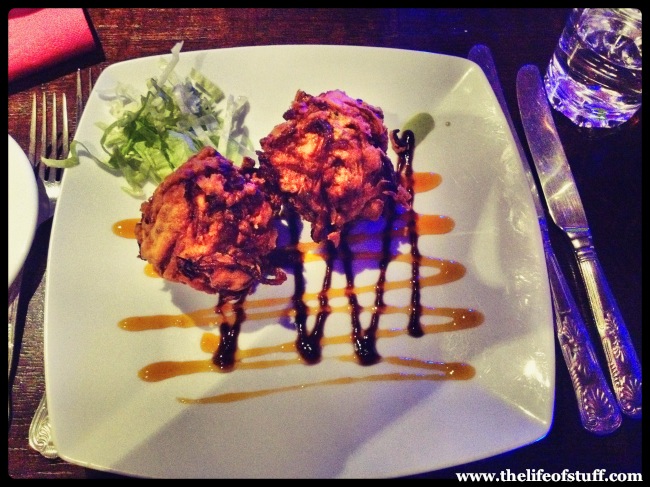 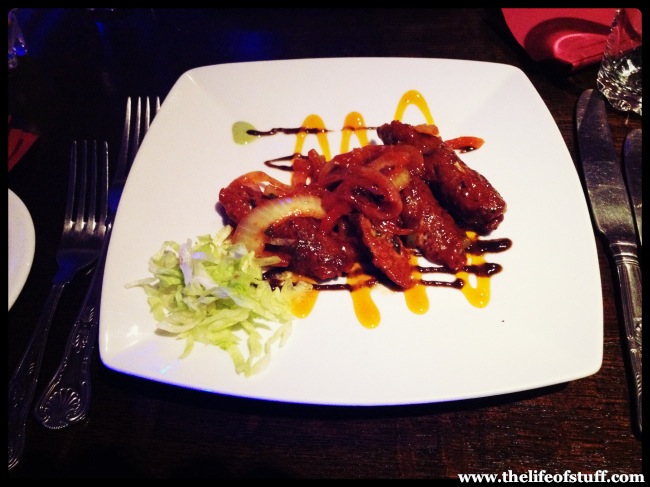 The space of time between the starter and the main meal was long enough for me to think about it but not long enough for me to make a point about it. As we had both ordered from the Chef’s Specials, I was hopeful for something great and was happy to wait. The mains arrived at our table. The bowl of Rice, pilau, was fragrant and big enough for two people. The Naan Bread was fresh and also large enough for two people to share happily. The Chicken Begum Bahar was mildly spicy in a Chef’s special sauce based on tomato. The chicken pieces were nice and chunky but were also tender and not dry like chicken can tend to be. The minced lamb in the dish was tasty and complimented the dish. The Laal Maans was a much spicier dish, the type that comes as an after kick … after the first bite. The lamb was tasty and again cooked to tender, not chewy or fatty. Over all the Mains were delicious. 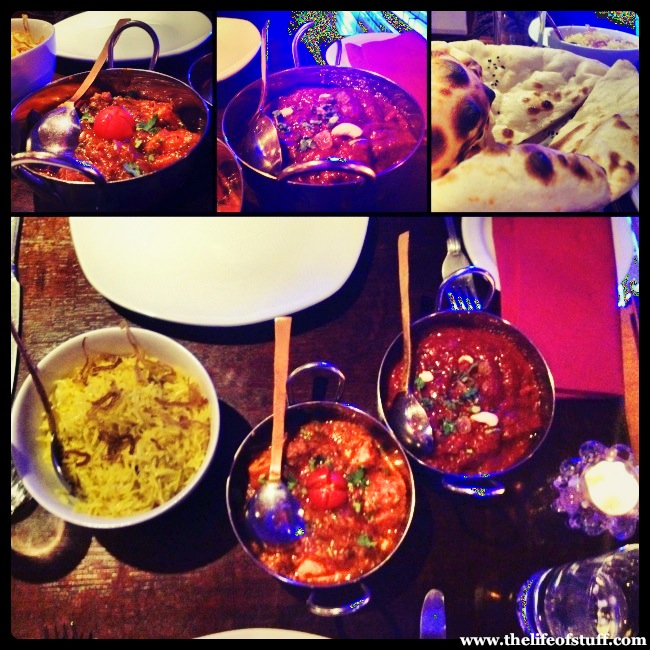 From the beginning there was an easy going and relaxed atmosphere about the restaurant. Relaxed as it was, our waitress was very pleasant and attentive, bringing fresh poppodoms and dips to our table and filling our glasses with water when needed … ’twas a school-night after all. When we ordered there was no intimidation to order an extra Rice or Naan Bread and she enquired into our satisfaction of our meals.

The success of the main meals completely swayed us in favour of Madhuban. We will return. For more information you can visit their website here madhuban.ie and I’d love to hear your verdict if you have visited or whether you plan to visit now on reading my review!