7 of the Best Cities in the UK to Visit

A trip abroad or even around your own country can be a significant spend, and not only money-wise but also on your time and energy too. Yes travelling on a whim and getting off the beaten track can be wonderful, and a real adventure. And we highly recommend you do. And there’s no doubt you’ll find your feet and make amazing memories.

So for those who have decided that their destination will be the UK, just know that your holiday ahead is packed with opportunities, from the Greenest City in the UK to a UNESCO Music City – the only problem you’ll have is deciding where to visit first!

Explore the Best Cities in the UK to Visit

Further Reading: Where to Go for a Weekend Break in Ireland and the UK – Part 1

London, the capital of England and the United Kingdom, is a city full of colour and energy. The city hosts some of the world’s most iconic landmarks, including Big Ben, Westminster Abbey and Buckingham Palace. London is also famous for its museums, such as the Tate Modern, British Museum and Natural History Museum.

Travel Tip: If you’re looking to explore London for some quirky souvenirs, gifts, accessories or clothing – go to Camden Market or Portobello Road, where you can purchase everything from handmade jewellery to vintage homewares. And for those looking for entertainment, you have plenty to choose from including cinemas, theatres and concert halls.

Further Reading: Where to Go for a Weekend Break in Ireland and the UK – Part 2

The City of Leeds is situated in West Yorkshire. It has a rich and fascinating history, particularly for those interested in architecture, with so much to see and explore -keep Wellington Street top of your list. In fact many of the city’s buildings and landmarks are remnants of the Industrial Revolution.

Travel Tip: Places to visit include the Royal Armouries Museum, Roundhay Park, Temple Newsam, and Harewood House – which was actually a filming location for Downton Abbey! 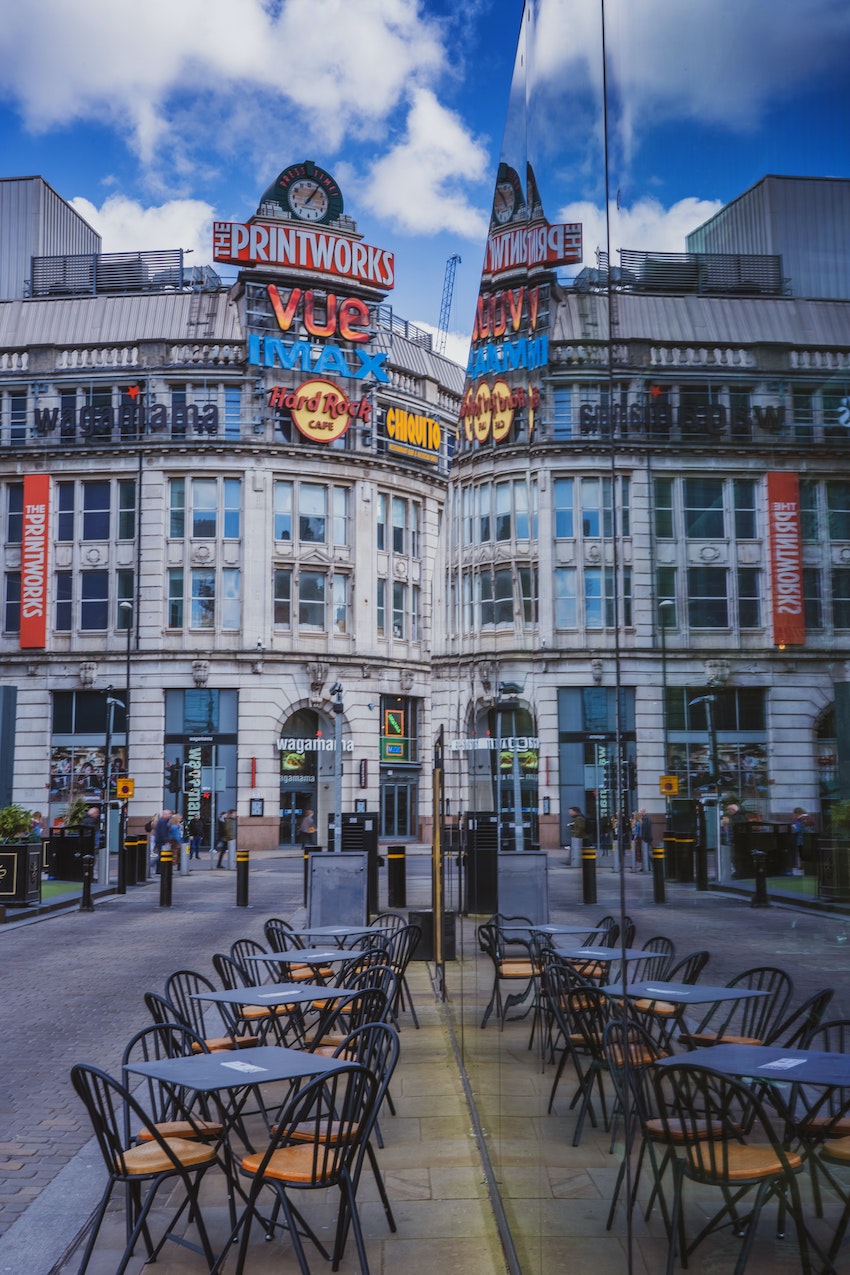 For those people interested in fashion, music and art, the City of Manchester is a great destination. It has a thriving nightlife with venues dedicated to every musical taste from pop to rock, especially around the Northern Quarter.

If you love clubbing try venues like Mint Lounge or The Venue. Or if you’d like to witness a big act then Manchester Arena has you covered. They host some of the biggest names in the world. In actual fact Manchester Arena is the largest indoor arena in Europe, welcoming 1.2 million visitors through its doors every year!

Travel Tip: Manchester has a rich history, heritage and cultural appreciation, and includes many iconic institutions such as the Museum of Science and Industry, The Lowry and The National Football Museum at the Urbis Building.

For those who thrive on fresh air and country walks then trips outside of the city should include visits to National Trust treasures; Lyme Park and/or Dunham Massey Park – both are about an hour from the city centre (in opposite directions unfortunately) and you can get there by train, taxi or car.

Northern Ireland’s capital, Belfast, is a bustling and vibrant city. There are several popular tourist attractions in the city including the Titanic Quarter, which not only includes maritime landmarks and commemorates the building of the Titanic but is also a stone’s throw from Harland and Wolff shipyard, where the Titanic was built. Other attractions to note is the beautiful government building of Belfast City Hall and the renowned St George’s Market.

Travel Tip: The Botanic Gardens in Belfast are worth your time – stroll through for some quiet time and enjoy a treat in the Wynne & Pym café of the Ulster Museum within the park.

The people of Belfast are friendly and welcoming, and the nightlife and restaurant scene should also be explored – from fish and chips at Fish City, to tapas at Margot, and michelin worthy dishes at Ox, you won’t be disappointed. 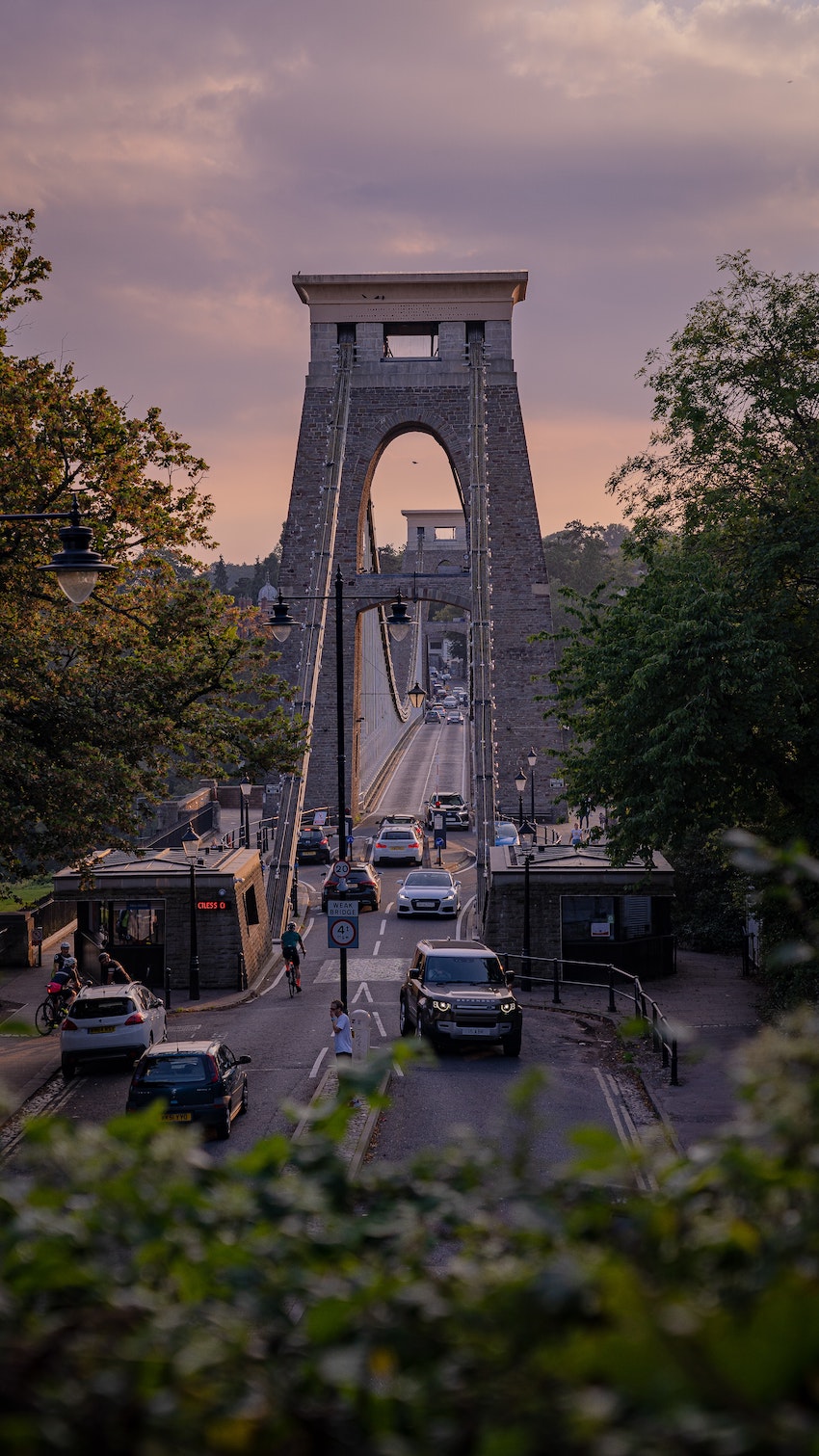 Did you know that Bristol City is the UK’s greenest city? And is the UK’s first ‘Cycling City’!

And when it comes to accommodation, there are plenty of options from budget hostels to luxury hotels that allow people to stay in the heart of the city centre – you can even opt for green accommodation and make your whole trip a sustainable travel adventure.

Along with its green status Bristol is also a city with one of the most active nightlife scenes in the UK, full of bars and clubs playing music of every genre.

Travel Tip: As mentioned Bristol is known for being a very green city and has won numerous awards including the status of European Green Capital and most recently, the most sustainable city in the UK.

From walking and cycle routes to country parks and green spaces throughout the city for you to explore. Some of the top ways to blow off some cobwebs is to to get out and explore one of the many local nature reserves in the city – there are 12 to choose from a march to woodlands.

Or you could keep it closer and visit the Clifton Suspension Bridge, about 15 minutes from Bristol city centre, or two minutes from Bristol Zoo. It’s a special structure and one of the city’s most recognisable landmarks, but more importantly you can walk it’s length and it should only take about 10 minutes.

The capital of Scotland, Edinburgh, is a buzzing city that’s home of some of the best museums and galleries in the country, including The Royal Botanic Garden Edinburgh, The National Gallery and the National Museum. There are also plenty of places to relax and take lovely walks, such as Calton Hill or Arthur’s Seat.

And if you love architecture, you’re in for a treat as Edinburgh is in fact a ‘place of outstanding architectural interest’ and a designated UNESCO World Heritage site. From Medieval ‘Old Town’ to Classical ‘New Town’ – Georgian, Gothic, Renaissance, not to mention the new and modern day architecture at Quartermile and the redevelopment of the Victorian arches of New Waverley.

Travel Tip: Did you know that the Edinburgh Festival Fringe, simply known as ‘the Fringe’ is the largest cultural arts festival in the world? Taking place for three weeks every August across hundreds of stages within the city, the festival highlights include comedy, theatre and dance. But please note – if you do plan on visiting Edinburgh during this time, book everything well in advance! 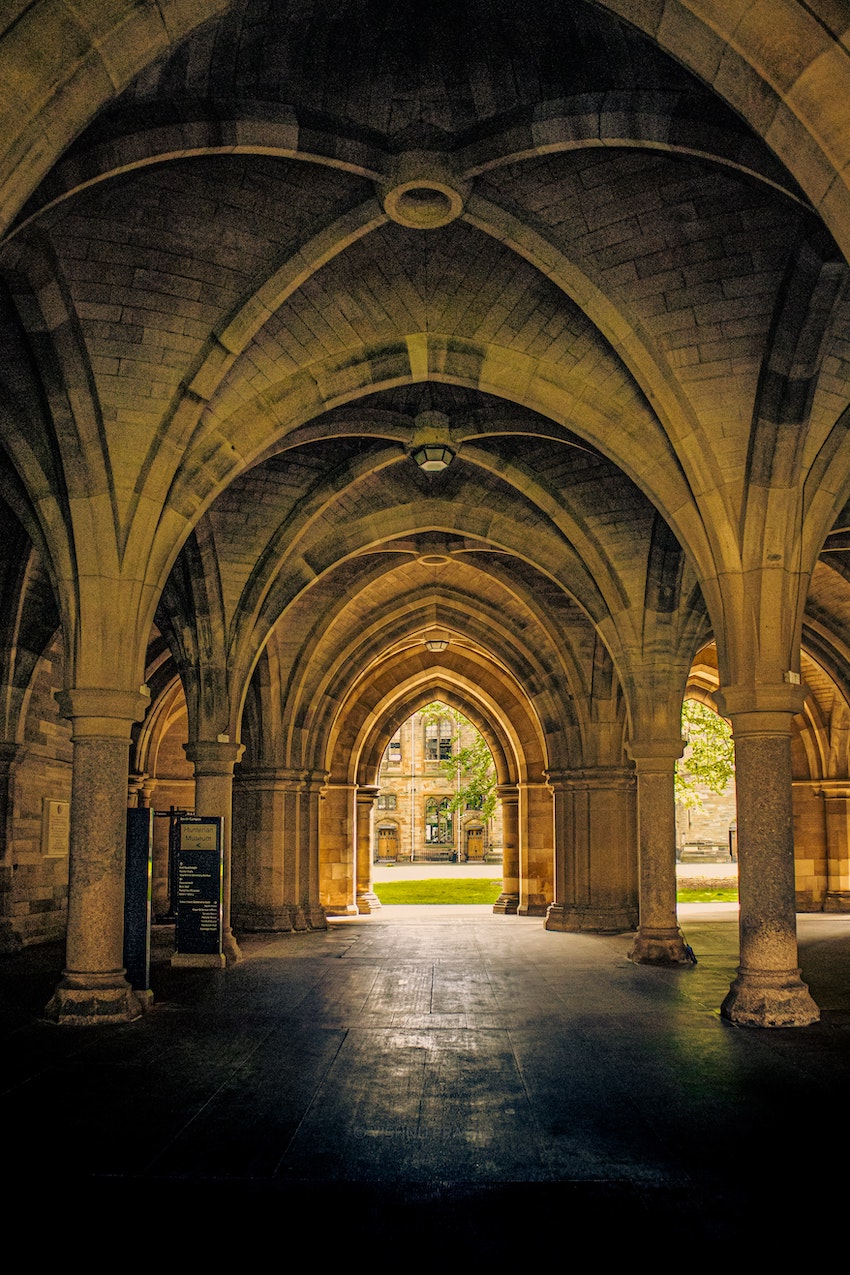 Did you know that Glasgow is the largest city in Scotland or that it was the UK’s first UNESCO City of Music! Music fills the venues, bars and clubs of Glasgow throughout the year so there’s no doubt you’ll be entertained during your visit.

And if the pubs and clubs don’t do the trick then the OVO Hydro will! The OVO Hydro is a multi-purpose indoor arena that hosts over 140 events and one million visitors each year, ranking it in the top-three busiest indoor arenas in the world. Built in 2013 it plays a big part in the success of the city of becoming a very ‘hip’ place to visit culturally, especially when it comes to food and drink.

And if it’s good food you’re after then Finnestone is the neighbourhood you;’ll want to be in. Renowned for its gourmet cafés and craft beer bars, to award-winning restaurants – this once industrial wasteland is now a thriving, vibrant area and a must-see.

Travel Tip: Rich in history, heritage and culture, Glasgow has some world-class museums and galleries that shouldn’t be missed. Kelvingrove Art Gallery and Museum next to Kelvingrove Park is a must. For art lovers, Charles Rennie Mackintosh is celebrated at Mackintosh House, and for food and art lovers visit Mackintosh at the Willow. And if Street Art is your passion then be sure to take part in a walking tour of the city that highlights them – you’ll have instagramable content for days!

There are many places to visit in the UK, with hundreds of great and inspiring attractions to witness – theses ‘7 of the Best Cities in the UK’ are inspiration to get you started. Of course getting to the UK depends on where you’re driving, ferrying or flying from but just so you’re clear, British Airways is the national carrier of the United Kingdom.

So have you decided what UK city is first on your list of must visits?

PIN: Destination UK – 7 of the Best Cities in the UK to Visit 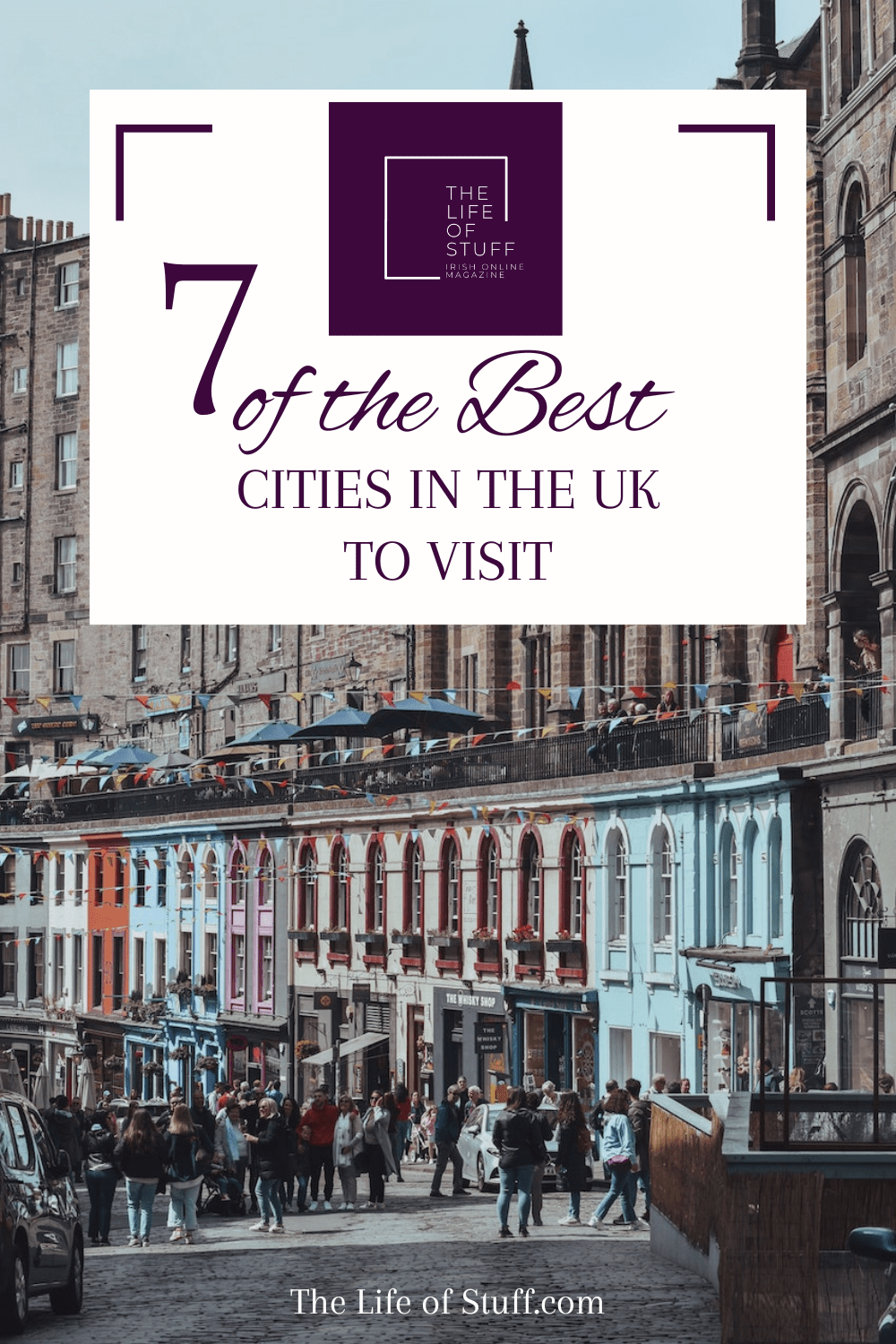 Money-Saving Train Travel Tips For Students in Ireland and UK