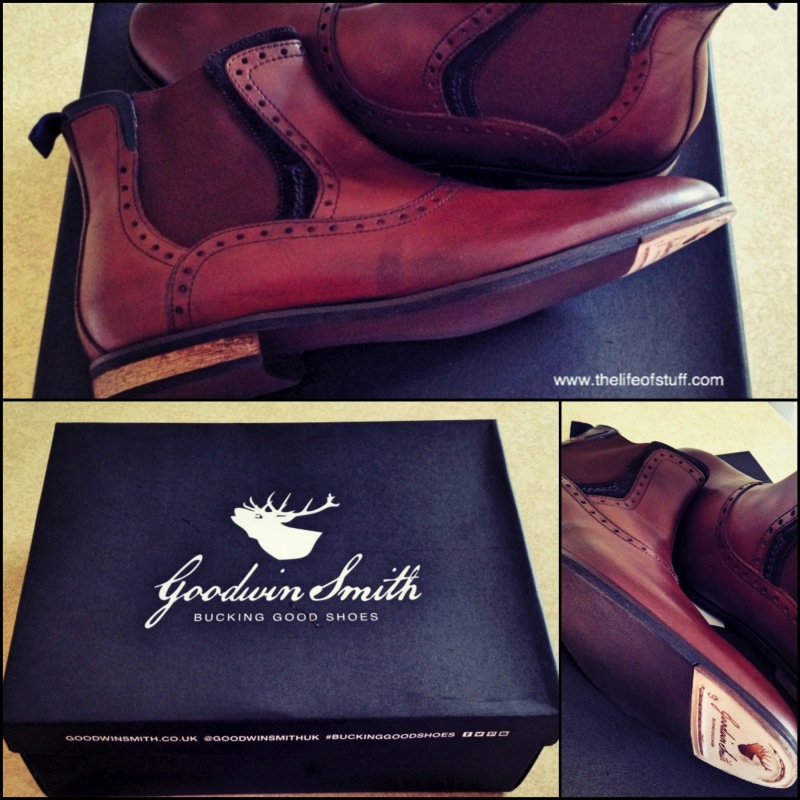 New Shoes … Yes and they are ‘Bucking Good’ ones too!

These gorgeous ‘Baldwin Brown’ boots from Goodwin Smith were part of a gift from me to Patrick (my hubby) to celebrate our son’s birth nine weeks ago. As well as being a sexy pair of footwear they have a sweet and special meaning for us too … I was going to go into a speel about it but you’re an intelligent lot of readers so I’ll keep it short and sweet. My maiden name is Smith, our newborn son’s name is Smith and these boots are ‘Goodwin Smith’ … a good win for us.

Goodwin Smith has a unique history, which started one night in a Lancashire pub way back in 1928. Two rival British shoemakers stood face to face, arguing about which one of them could make the better shoe – Ernie Goodwin or Walter Smith. They came from different backgrounds, Ernie a Manchester city footballer and Walter a coal miner, but they each shared the same ideals, namely a passion for making quality footwear and a good night out. After that argument in the pub, Goodwin and Smith joined forces to create ‘The Bacup Shoe Company’.

Nearly one hundred years later, nothing much has changed. The Bacup Shoe Company is still owned and run by the same family. And they are still making quality footwear. Under Tim Smith’s leadership, a contestant on Dragons Den, the company has developed the ‘Goodwin Smith’ brand to celebrate the two founder’s intriguing characters. Like Ernie and Walter, Goodwin Smith represents the epitome of the modern man who likes to work hard and play very hard. (goodwinsmith.co.uk)

The brand has a unique take on classic shoe design, one that’s contemporary and fresh. I love that a brand who’s life started off in a local pub took itself online and worldwide. I also love the fact that so much care is taken into making their shoes, so much so that it can take up to a month to make one pair alone. Style and quality – you can’t beat it. These boots were made for walking and that’s just what they’ll do alright …

… Check Patrick out … ‘Bevvy of the Week’ extraordinaire for The Life of Stuff and now ‘Shoe Model’! He’s de-lighted with his new brogues. He loves their look and that he can make them look like a different pair of boots just by styling them differently. They were comfortable from the beginning and the unique stamp on the sole of the shoe gives them that extra special something …

Patrick’s ‘Baldwin Browns’ cost £100.00 and you can check them out for yourself here. The delivery from the UK to Ireland was surprisingly fast … only a couple of days. Their full range and collections are superb so we know that these might be his first pair of GS shoes but they won’t be his last.

Beauty & Style – 5 Fun Ways To Change Up Your Look

4 Helpful Tips For Exercising With Your Glasses