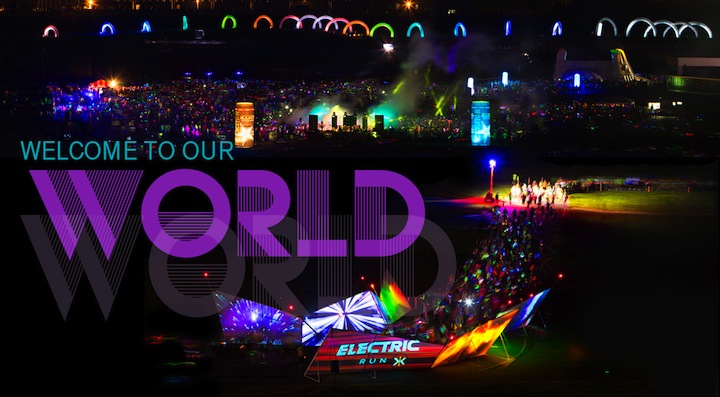 Just before Christmas a friend of mine sent me a link to what looked to be the funkiest 5km run I have ever seen. Thanks Ethan. He asked if I’d be interested in taking part and maybe set up a team. After I had a quick read of the ‘about’ section, a look through the gallery and watched the promo video, which I’m about to share with you … all I could say was ‘You had me at glow-stick’ …

Thousands of people dressed up like wacky ravers running and walking through the streets of Dublin as the buildings turn different colours and music pumps … my imagination ran wild. Also the theme tune of Capital Cities closed the deal …

That night I signed both myself and Patrick up. It was nice to be able to avail of the Super Early Bird registration fee and I made a pact with myself that I’d get in shape for this run and if I didn’t I’d cover myself in so much glow in the dark gear that it will appear I am running when in fact I’ll be walking as briskly as I can. Electric Run is not a race after all so if you’re a competitive runner I’m not sure if it’s for you.

Only invented in 2012 by American Dan Hill, this is the first ever Electric Run in Ireland and Europe! For more information on Dan and how this event came about you can read a short interview with him here  www.activeendurance.com/dan-hill

I’ve tried to get some extra information on the event to share with you. That’s why I’ve held off on this post for the past couple of weeks. I’ve emailed and Facebook messaged Elverys Sports who are sponsoring the event but I haven’t received a reply. I also contacted Active.com to amend a mistake I made when registering but they advised I should contact the Event Director … like I know who that is? If I don’t get my mistake amended, lets just say that there will be Patrick and Patrick on Team TheLifeofStuff.com as opposed to Edwina and Patrick! * Edit – The lovely folk at Electric Run Ireland (see comment below) got in touch and my name has been amended so TheLifeofStuff.com Team now has my name!

Anyhoo enough with my rambling … What I can tell you about Electric Run Ireland is that ‘Regular’ registration is open until February 2nd for a fee of €35.00 and if you miss that, the price of registration increases the closer to the event it gets, so if you are interested in registering you can do so by clicking here electricrun.ie/dublin It’s pricey but you do get a t-shirt and some glow gear to wear, a DJ, light show and special effects along the route and I am hoping that a good chunk of the registration fee goes to a worthy Charity too.

The event will take place in Dublin City Centre and will begin at 7.30pm. The route will include the RDS. I know this because Electric Run Ireland’s partner runireland.com mentioned quite recently that it will be lit up for the event, however I don’t know much else and I am really eager to see the route. The event Charity hasn’t been announced yet and there are no details on sponsorship cards so if you want to do it for Charity, it looks like you’ll have to organise that part yourself. Honestly not much has been announced, which could be a little worrying but it’s the first one so it will either happen or not.

If you have anymore info on the event let me and The Life of Stuff readers know by sharing in the comment box below. I’m off to scour the net for cheap glow stuff and a wig …

Bevvy of the Week - Nogne