Things to do this February 2016 in Dublin

It might be February but there’s still time to mark off the ‘Five Things to do this January 2015 in Dublin‘ List so get to it … but before you do have a read of all the fantabulous things you can do in Dublin this month.

I won’t be spending Valentine’s Day in Dublin this year. This Valentine’s Day 2016 will be Smith’s first Valentine’s Day ever so to celebrate, Patrick (the hubby), Smith and I will be chasing snowdrops down in Kildare and Carlow followed by Afternoon Tea at Duckett’s Grove. Plans for the evening haven’t been finalised yet but it’ll most likely be a glass of wine, chocolates and a movie when Smith goes to bed. I can’t wait.

If you’re in Dublin and celebrating Valentine’s Day, why not visit Whitefriar Street Church and celebrate it with the main man himself. That’s right, you may or may not know this but the remains of Saint Valentine can be found in Dublin … and just as his name represents love, so too does the altar at Whitefriar Street Church on February 14th. On that day, you’ll witness many couples praying for St. Valentine’s to watch over their relationship. Whether it’s your forté or not, it’s an experience.

For more on the history of St. Valentine’s relics (remains) visit the Carmelites website, it’s an interesting history read.

TACKLES LOVE IN ALL ITS GUISES

“Blue Heart Theatre presents, Couples + Pairs, an evening of short plays and songs, all with love and relationships as a theme, takes to the stage for Valentine’s week at the Theatre Upstairs, Dublin.

In this entertaining and thought proving world premiere of five short plays by exciting new and emerging writers, the theme of love is explored in all its glory. Searching for love, finding love  and losing it are all touched on in this show, being brought by Blue Heart Theatre to the intimate space of the Theatre Upstairs for Valentine’s week.

In ‘Icarus’, by Margaret Perry, which was nominated for Best New Writing at the Dublin Gay Theatre Festival in 2015, a promising new relationship between two women is threatened by a dark secret from the past.

In ‘First Impressions’, by Mike Kunze, a couple wrestle with the notion of whether the first impression the right impression?

In ‘The Tearing up of Fergal and Tim’ by Sean Denyer, two men’s attempts to have a ‘civilised breakup’ goes disastrously awry, when a dispute over the ownership of a book of poems, escalates into a full-scale fight.

In ‘Baggage‘ by Erica Murray, a woman turns up for a date with  a man who has no idea who she is, and in Modern Romantic, by Brian Higgins, a woman and man reveal their romantic hopes, only not to each other.

The show also features live music by American chanteuse Cal Folger Day, who will link the pieces with songs familiar, and some not so, which echo and amplify the stories on stage.

Producer Sean Denyer said, ‘Everyone has suffered for love, and I think most people will relate to more than one of the plays! The short play doesn’t have much of a history in Ireland, but is a very established form in the USA where they have whole festivals devoted them. The stories are complimented by singer Cal Folger Day, whose singing provides both a link and a wry commentary on the action.” 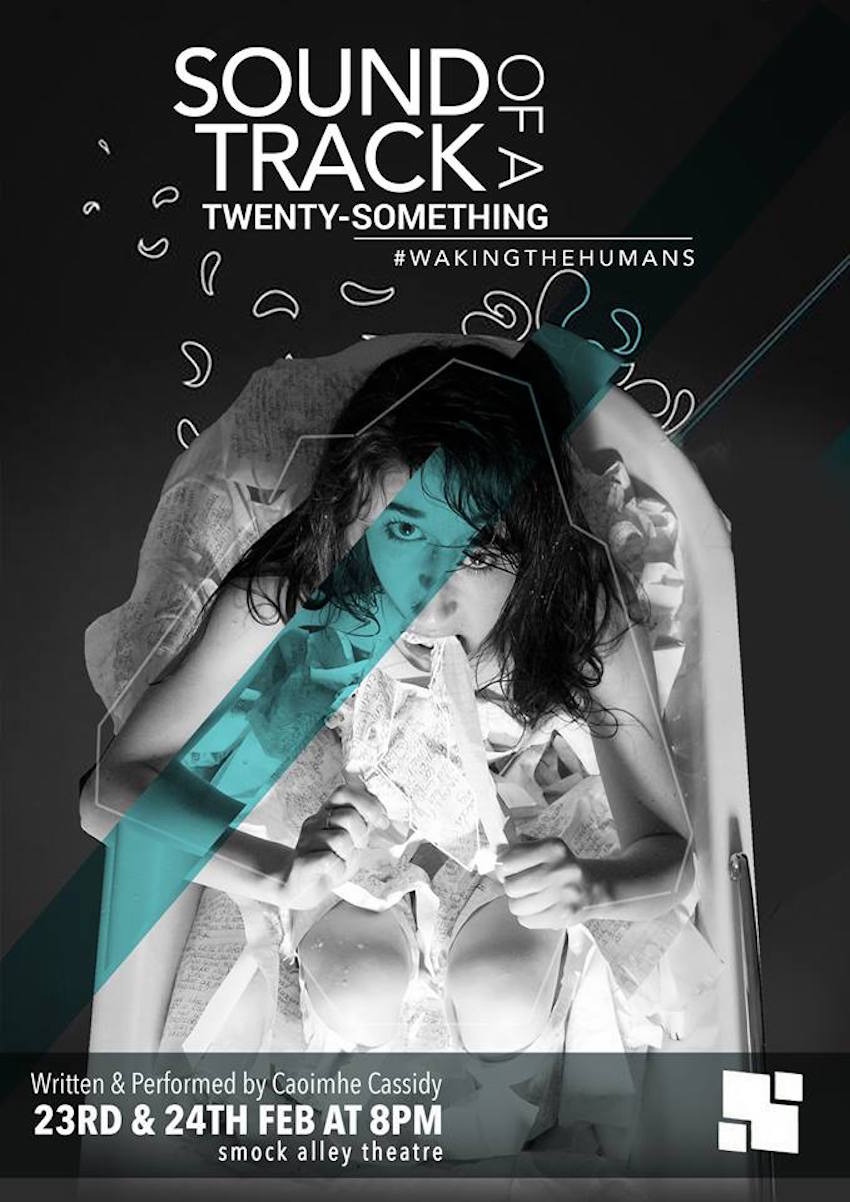 The Soundtrack of a Twenty Something

The Soundtrack of a Twenty Something. Written and performed by Caoimhe Cassidy.

“Distracted, Addicted, Disconnected. Wakey Wakey Humans! In an attempt to raise consciousness – revealing my conscience, my thoughts, my observations – expect my absolute truth. Expect Music. Expect Leppin’ around. Expect Nudity…. of the soul.

“#eatingwell – is the new eating disorder”
“Is smoking a form of slow suicide I often wonder?”
“Through social media becoming unsocial.. we need to end this love affair”

‘Trending on Truth. My Truth, The Whole Truth and nothing but The Truth. In sooth, the lyrics of a Twenty Something. Something’s you may not want to hear – they may resonate, make you contemplate. Maybe you’ve heard it all before.. But this is MY soundtrack MY Twenty Something Score.” (Caoimhe Cassidy)

“Celebrate the Centenary by paying a visit to the must see REVOLUTION 1916 The Original & Authentic Exhibition in the Ambassador Theatre … A fitting location for the exhibition, the Ambassador Theatre was formerly the Rotunda Rink and dates back to 1764. It was here on 25 November 1913 that the Irish Volunteers held a mass meeting and many volunteers who took part in the 1916 Rising signed up.

During the 1916 Rising, the Ambassador was the backdrop for the famous image of British Soldiers posing with the captured Irish Republic flag held upside down and inside out. Beside the building is where the captured rebels from the G.P.O. and Four Courts garrisons were held out overnight at the front of the Rotunda.

The exhibition will … feature the largest private collection of 1916 artefacts, with over 500 items on display … use the 1916 Proclamation as its overall theme and will examine the “six times during the past three hundred years they have asserted it in arms” as the lead up to the events of 1916. A series of sets will take the visitor through the main locations of the 1916 Rising including The G.P.O., Moore St, and recreating the 1916 Kilmainham landing and walk to the stonebreakers yard.”

Location: A home near you or not

Last month I was invited to the first ever Meetsies in Dublin, unfortunately I couldn’t attend but that’s not to say I won’t be buying a ticket to one in the near future … because it sounds foodilicious! Here’s what you need to know …

“Many of us don’t have time or appetite to cook, whereas many of us love to cook for others. The problem is that both kinds of people don’t always know each other. Meetsies is a platform through which amateur cooks can propose their delicious dishes to their hungry neighbours.

The story of Meetsies started a few months ago, in Brussels, with a team of Belgian and French foodies, whose slogan and life mission is: “Sharing food is delicious”. They rapidly decided to expand their community to other cities. When they met Suzannah Korniotes, an American expat who recently moved to Dublin, it became clear that Dublin would become the second cradle of Meetsies.

Suzannah Korniotes explains: “When I learned about Meetsies – I thought, wow what a brilliant idea! I felt it would be a great way for people like me, who want to meet new people, to do so in a fun and relaxed environment. Cooking and eating are my favourite things to do so I was immediately hooked on Meetsies!”

The Meetsies website, which you can access by going to www.meetsies.com, offers you several possibilities: social dinners at your neighbours’ homes, cooking classes with talented people or a take away of homemade food. In all cases, it’s an opportunity to eat quality food, meet others, and enjoy food in a friendly and local way.

As an amateur cook, you can propose your meal by simply creating an account and define your menu and price. Your guests can book online and you will receive your payment right after the meal has taken place.

Upcoming events will be put online and announced on the Facebook page www.fb.com/meetsiesdublin.”