Things to do this March 2016 in Dublin

‘Time and tide wait for no man’ … well it certainly hasn’t waited for this woman either. I’ll save you the details but this time last year I was waiting to give birth to my first born. Smith made his grand appearance on March 10th at 11.23pm 2015. From that moment the month of March became the most special month of that year and every year to follow. To think that we’ll be celebrating his first birthday in a couple of weeks amazes me. I enjoy my little life adventures and share most with you here on the blog but nothing will beat the adventure of becoming a mother and being a parent. Nothing. 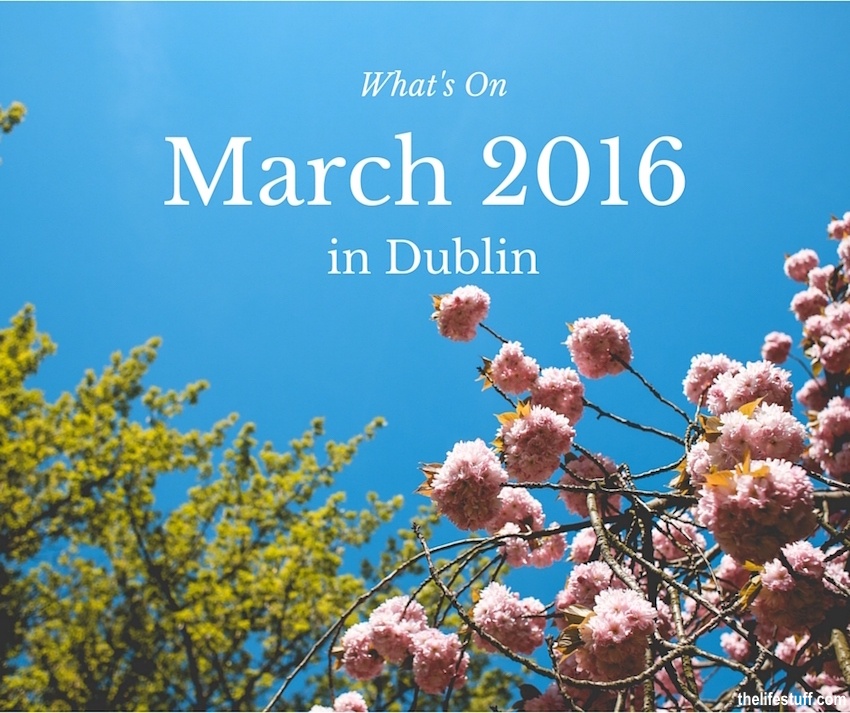 As winter tries to leave us, March officially welcomes us to the beginning of Spring. Spring is a time for growth, new beginnings, creativity and the aforementioned word ‘Adventure’. If you have been hibernating over the past few months, this month is a good one to get out and join the party.

To help you along here is my listing of things you can do in Dublin in March 2016 … oh and it’s dominated by women (mostly) because after all it is ‘Women’s Day’ (Tuesday March 8th) and ‘Mother’s Day’ (Sunday March 6th) month too … and all women are mothers. We are mothers of children, of growth, of new beginnings, of creative development, of adventure … and if we’re lucky or choose to be, of all five.

“A comedy about love and thumbs…

When Lena liberates a thumb from the lab in which she works as a cleaner, it seems only fair to grow him back into a (luscious) man and then, well, to keep him safe. Hostage, like. But out of love. Entirely out of love. She rescued him, you see. From being a thumb in a jar. That’s love, see. Against all the odds. Of everything.

All Thumbs is written by Lindsay Jane Sedgwick, an award-winning screenwriter and former journalist whose nine hours of TV and film credits include the creation of the ground-breaking thrice IFTA-nominated TV series, PUNKY. Previous plays have been staged in the Focus Theatre, Smock Alley Theatre, Theatre Upstairs, the Waterside (Derry), Cork Arts Theatre and broadcast on BBC Radio 4.”

“Marc O’Reilly has self released two albums to date, ‘Human Herdings’ and ‘My Friend Marx’ and has toured extensively. Over the past few years he has established himself as one of the most exciting new artists within the folk/blues genre ~ gaining comparisons with artists such as John Martyn and Bon Iver. Marc has toured all over Europe including appearances at major festivals like Glastonbury, Boomtown and Boardmasters plus Live in the Vineyard Festival in Napa, California. Along with of course, many Irish festivals where he is becoming a household name.

“This is the 2nd annual International Women’s Day Pub Quiz! Last year was a success as we raised over €600 for a local charity supporting women. We hope to do the same again this year, with our proceeds being donated to Dublin Rape Crisis Centre! We are celebrating Women’s Day by holding a lady themed quiz in which all questions will pertain to women in history, women’s rights movements, women in literature and music etc.

Entry will be €5 per person, and we will be selling raffle tickets for prizes.

Teams may consist of between 4 and 6 members! If you do not have a team, we will pair you with one when you arrive, so feel free to arrive solo and make new friends!”

“The Royal Hospital Kilmainham will host a launch for Richmond Barracks 1916: “We were there” – 77 women of the Easter Rising, a timely new book that tells the stories of the 77 women who, along with their male colleagues, were arrested during Easter Week 1916 and held at Richmond Barracks. These women came not just from Dublin, but from various places around the country, from all classes, backgrounds and levels of education, and differed widely in their motivations for participating in the Rising, where they fought in Dublin but also in outposts in Enniscorthy and Galway.

Lord Mayor of Dublin Criona Ní Dhalaigh will officially launch this book. All are welcome to attend this event, which is sponsored by Dublin City Council.”

“EMBRZ, the brainchild of 25 year old Dublin-born Jack Casey, first began writing music at 15, playing guitar in a band with school friends. With an eclectic interest in music, it was an early deadmau5 track which introduced Jack to the world of electronic music. Inspired by this discovery and other artists alike, the self-taught musician began producing out of his college bedroom, posting tracks on Soundcloud simply to share with friends. Combining elements of dance with downtempo music, Casey developed a signature style that underpins the unmistakable emotionally charged EMBRZ sound.

Soon those same friends on Soundcloud began sharing this new sound and before long the blogs aficionados and Youtube influencers were fans as well. Once his first official remix of Ellie Goulding ‘How long will I Love You’ crossed the million play mark, as well as his remix for The 1975’s ‘Settle Down’, EMBRZ was here to stay.

Since then a string of Hype Machine number 1’s have grown his fan base both with casual fans and tastemakers alike. He recently released his first original track ‘Silent’ showcasing his talents in both songwriting and production (he both wrote the vocal and produced the track). With several more releases and performances planned through the rest of the year, it’s exciting to see what’s next for the young Irish producer.”

“On the occasion of International Women’s Day, 8th March, and the centenary of 1916, the National Women’s Council of Ireland (NWCI) will once again be bringing their custom made Soapbox to the streets.

The location of this year’s Soapbox holds special significance as the bandstand at St. Stephen’s Green was held by rebels led by Constance Markievicz in 1916.

NWCI believes the best way to commemorate women’s role in 1916 is to reflect on the key themes of 1916, and whether they are still relevant today. Echoing the seven strands of the official programme and indeed the seven signatories of the 1916 Proclamation, NWCI plans to examine seven themes which were crucial to the involvement of women: Equality, Politics, Labour, Health, Creativity, Republicanism and Pacifism. Feminism will be a crosscutting element.

Taking to the Special Centenary Soapbox this year will be a mix of historians, artists and contemporary trailblazers who will address the relevance of the seven themes to women in 1916, today and into the future.

Others will be online talking on #NWCISoapBox”

“11th March 2016 marks the release of Luneworks, the much anticipated debut album by 22-year old Dublin-based musician and producer, Jack Colleran, A.K.A MMOTHS. To celebrate we’re hosting his biggest headline show ever with some very special guests TBA!

About Luneworks:
Luneworks was created during a period of personal upheaval for Colleran, who headed out to a friend’s tiny spare room in L.A with just a laptop and a few changes of clothes. What ensued was an intense month of twelve hour night-time writing and recording sessions, where Jack sought to isolate himself in order to keep the songs as pure as possible. The quietness of the city at night was a real inspiration, and the constraints of an alien environment proved something of a liberation.

The ancestral, ethereal spirit of Ireland is also present throughout Luneworks. Kevin Shields (My Bloody Valentine), one of Dublin’s most famous sonic outliers, is a noted influence – another musician who has wrung sweet emotion out of chaotic noise.

The result is Luneworks, a fully immersive head-trip; a record that is at times brutal and at others unbearably beautiful; sometimes in the overlap of a single track.

Luneworks is a mirror to the soul – a gorgeous, wordless expression of unedited, unfiltered emotion, heralding the arrival of one of the most important electronic artists of our generation.”

“On the centenary year of the Easter Rising comes McKenna’s Fort, the world premiere of a play about one of Ireland’s most famous gay icons, the revolutionary Sir Roger Casement, the last rebel leader to be executed for his part in the 1916 rebellion.

Written by Arnold Thomas Fanning and drawing from Casement’s infamous Black Diaries the play will take to the stage under the direction of Paul Kennedy.

Easter 1916, the Irish revolutionary and humanitarian who has travelled by submarine on a mission to deliver arms to the rebels finds himself hiding out in the ancient rath of McKenna’s Fort in Kerry, uncertain of his future and his role in the uprising. Haunted in the night by images of the horrors he has witnessed during his humanitarian work in the Congo, he conjures up memories of better times, and in doing so reveals a secret inner life which the world must never know of.

Starring Michael Bates as Roger Casement and Presented by Fire & Ice Theatre Company, McKenna’s Fort is an unflinching look into the life of one of Ireland’s most controversial revolutionary figures. Told in direct and at times poetic language, the play draws on Casement’s own voice as found in his many diaries, letters, and official writings.”

… So funny you’ll have a stroke!

Meg March is all set to marry local politician John Brooke. He has everything a 19th century woman could desire- teeth and an income!

However, Meg’s sister Jo knows that John Brooke is not quite as perfect as he first appears. Jo, a playwright and political activist, plots to liberate her sister from a life of marital enslavement. To do this she enlists the help of her youngest sister and lifelong nemesis, Amy… with explosive results!

Even poor Beth, with her impending death, is causing a bothersome race against the clock for the couple.

Will Meg make it to the church alive for the happiest day of her life?!

So loosely based on Louisa May Alcott’s Little Women that it’s borderline slander!”

Bevvy of the Week - AND UNION Handwerk Every Day IPA

Make Over Your Morning with my Alpro Plain Big Pot Recipes