Ballykilcavan Brewing Company is an award-winning micro-brewery based on Ballykilcavan Farm in Stradbally County Laois. 100% family owned, Ballykilcavan Brewery was set up by David Walsh-Kemmis and his wife Lisa in 2016. Both their beer and brewery are authentically special – from their brewery which is homed in a 240 year old stone building to their own farm grown ingredients that are used to brew their beers.

I was first introduced to Ballykilcavan Brewery a few years ago when I spotted one of their beers gracing a shelf in my parents pub. Recently they’ve featured as a ‘Bevvy of the Week‘. And today I’m delighted to grace The Life of Stuff website with ‘Beer Talk with David of Ballykilcavan Brewery’ in our Irish Food & Drink Series.

Let the Questions be Beer! – Q&A with David of Ballykilcavan Brewery

How did the idea Ballykilcavan Brewery come about?

In 2004, I took over our family farm, Ballykilcavan Farm, which is just outside Stradbally in Co. Laois. I had a nice job in IT, but the farm had been in our family for 12 generations since 1639. And I felt that I wanted to maintain that history, rather than letting it fall away. When I took over, Ballykilcavan was mainly a tillage farm. And our main crop was malting barley, so it gave me an interest in what our barley was being used for once it left the farm. I started home brewing and developed an interest in brewing different styles of beer to see how they turned out.

About ten years after I took over, I realised that we would need to diversify the farm to make sure it was financially viable into the future. There’s no point in being the 13th and last generation to run the place. Because of my interest in brewing and because we were already growing the main ingredient, my wife, Lisa, and I decided to set up a brewery on the farm. And to use our own barley to brew the beers.

When was the brewery set up?

Lisa and I set up the company in 2016, and we made our first beers in 2017. To begin with, we were using the brewery at Lock 13 in Sallins while we built our own brewery. And we moved into the on-farm brewery in December 2018.

Where is the Ballykilcavan Brewery HQ?

The brewery is installed in a 240 year old stone building in the 18th century farmyard at Ballykilcavan. The building used to be the grain store on the farm, and it was used both for storing and milling the grain that was harvested on the farm. When I took over the farm, it was just being used for storage, so we cleared it out, put in a new floor and services and brought in the brewing equipment. Inside, you can still see the original brick ventilation slots and some of the original stonework.

Who are the team?

There are three of us working full-time in the brewery. Nigel is our head brewer. He started his brewing career in Smithwick’s in Kilkenny before moving to St. James’s Gate when the Kilkenny brewery was closed down. He took early retirement from there and has been working with us since 2017. Joe joined us in early 2018, and now works as our innovation brewer and head of sales. Basically, he comes up with the recipes on our pilot kit. And Nigel brews them on the full sized kit. I started off doing everything, but I’m now in charge of the marketing and financial side of the business. And also responsible for getting our tourism product ready for launch.

Where is your beer brewed?

All our beer is brewed on site on the farm. Since we opened our own brewery in December 2018, we’ve used our own pilot kit and the “big” 1000 litre kit – which is actually really small by industry standards – to brew every batch of beer that we’ve produced.

Describe the products you offer.

The first beer we ever brewed was a pale ale called after our Bin Bawn barley field. Over the next two years, we added four more beers to the core bottled range, each named after a different field on the farm: Brickyard red ale, Long Meadow IPA, Blackwell Irish Stout and Back Lawn lager.

We produced our first canned beers last year, and now have four core canned beers. The first two were Secret Passion, a peach and passion fruit pale ale and Millhouse IPA, a full-flavoured, but low alcohol IPA. In the autumn, we added Line Blocker pale ale, a hazy pale ale with lots of dry hop flavours, and Bambrick’s Brown Ale, a rich, malty American-style brown ale. It’s named after Joe Bambrick who worked on the farm for 60 year. And for four generations of our family, starting with my great-grandfather.

Our next new beer will be out in the middle of May, and it’s the first of our limited edition canned beers. We’ve called the series ‘Clancy’s Cans’, after the Clancy family who have worked on the farm for 5 generations. And the first beer is a raspberry wheat beer, perfect for (hopefully) hot summer’s days.

What are your Beer’s price points at retail? And their route to market?

We have some taps in local bars and hotels. But most of our beer is sold in bottles or cans. Prices vary depending on the stockist, but the bottles usually retail for about €3.50 a bottle or 3 for €9. And the cans are usually about €3.75 or 3 for €10.

Who are your customers?

With the two different ranges (bottles and cans), we’d like to think we have a beer to suit every beer drinker. The bottled range is a bit more traditional: a classic Irish red ale and stout and a really crisp refreshing lager. But there’s also a nicely balanced pale ale and an IPA with a bit of malt in there as well. The canned range is more of what people might see as “craft” beers – more hops and some fruit. And more modern branding compared to the bottles. 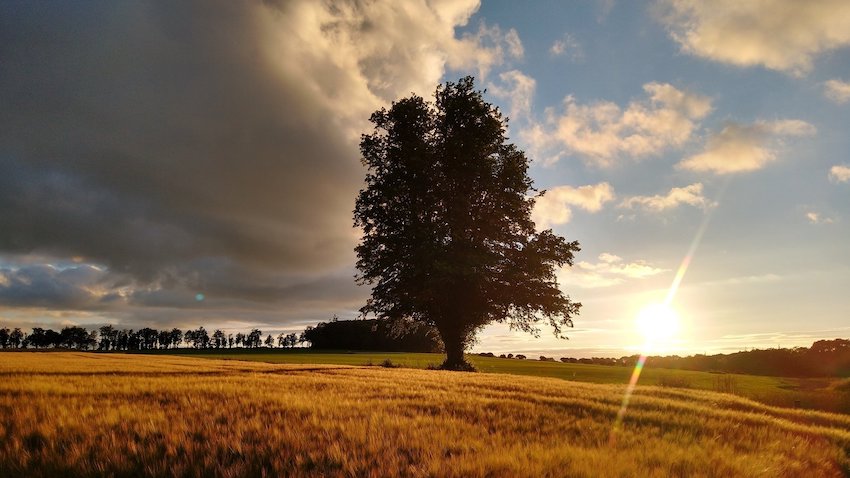 I think the two things that set us apart from other craft breweries are our story and our ingredient provenance. Our customers seem to really engage with the story of the farm and the history of the family. And we try and share as much of that through our social media as possible.

In terms of our ingredients, we grow our own malting barley. And our brewing water is drawn from a well that is 100 metres away from the brewery and was divined for us by the head gardener from Ballyfin House. We also have a small hop garden, which means that every autumn we can brew a beer where 100% of the ingredients are sourced from within 500 metres of the brewery.

When brewing – do you work to the maximum allowance as a Craft Brewery?

We’re well under the maximum allowance for a micro-brewery. You can currently produce 5 million litres of beer a year and still be classified as a micro-brewery by Revenue. And we couldn’t produce anything near that amount with our current setup.

While we’re on the subject, there’s an interesting (to me anyway) discussion around the terminology of small breweries. The only legal definition in Ireland is that of a micro-brewery. That’s a Revenue definition, based purely on the volume of beer produced. Anyone can call themselves a craft brewery – there’s no legal definition of it at all.

We’ve had problems with big breweries producing huge amounts of beer and selling it as craft. We would probably define ourselves now as independent and local. We’re family owned and operated and by supporting us, you’re supporting local jobs in our small business and a range of other supporting small businesses.

Ireland is a pretty small market, and there are a lot of other breweries looking for the same customers, so the aim was always to export at least a portion of our production. We had started to export a small amount of beer to France, and I was due at a big beer festival in Paris in May, but that has obviously been postponed for now. In our initial dealings abroad, what I was happy to see was that the French were very enthusiastic about the beers and the story behind them, so once life returns to some sort of normality, we’ll start to build up our export volumes again.

What awards has Ballykilcavan Brewery won?

We won three medals at the 2018 Dublin Craft Beer Cup, just 8 months after we produced our first beers. And then won 6 medals at the 2019 edition. The company was also named the best new business in Laois in the National Enterprise Awards in 2019. And won the silver medal in the 2019 National Startup Awards in the Food and Drink category

If you could pick a Brand Ambassador (living or dead) who would it be? And why?

I’m going to pick Ralph Fiennes, partly because I think he’s a great actor and partly because he’s a very distant cousin (through the first member of my family to move to Ballykilcavan). I’d love to get him over to open up our new taproom when that is ready to go. But I’m not sure we’ll manage to wrangle that.

What is the big news? What should we look out for from Ballykilcavan Brewery in the coming months, year?

Our next big addition will be our new visitor centre and taproom. The plan was to build it this year and have it ready for spring 2021, but that might be delayed by six or twelve months depending on how long the coronavirus restrictions last for. When it does get built, we’ll be installing a visitor centre into the 200 year old mill house that backs onto the brewery. And we’ll be putting in a taproom so that visitors to the brewery can enjoy samples of our beers on-site.

Finally, what’s your favourite brew and what’s the best way to enjoy it? Food pairing etc?

It’s like asking me to pick my favourite child! It does depend on the time of year and the weather. At the minute, I’m alternating between the Bin Bawn pale ale and the Millhouse IPA. I’d drink the pale ale with anything spicy – there’s enough hops and bitterness to balance it out. The IPA goes well with any barbequed food, and at only 3.5% alcohol, it’s perfect for drinking during the day.