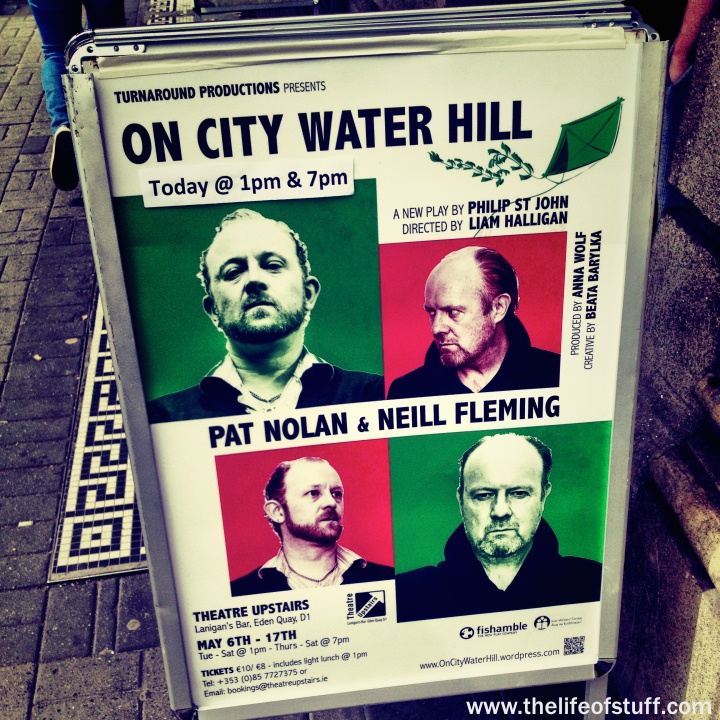 On City Water Hill is a new play by Fiction and Drama Writer, Philip St John. It’s directed by Theatre Director, Actor and Tutor, Liam Halligan. It’s produced by Anna Wolfe, Artistic Director and one of the Founders of Polish Theatre Ireland and stars Actor, Producer and Director Pat Nolan … I’m not a ‘tv soap’ kinda gal but even I recognise him from another ‘city’ title and accomplished Theatre Actor, Neill Fleming.

I hadn’t been to the Theatre Upstairs for a while, last year I lived there, well not literally but I did catch quite a number of plays there. I know I’ve missed a number of show stoppers this year already but that changed last Friday May 9th when I found myself sitting upstairs before the ‘On City Water Hill’ performance with my bowl of soup, two slices of brown bread and glass of H2O. You see as I’ve mentioned before here, here and here … one of the most attractive things about Theatre Upstairs to me is their Lunchtime Performances that start at 1pm and finish at about 2pm. I work very near the Theatre so it’s ideal for me to nip out for something so cultural on my lunchtime. I’ve also attended their 7pm performances which again are ideal as you still have the rest of your night after watching a play to mull over or discuss with your partner in crime or yourself what you’ve just witnessed. 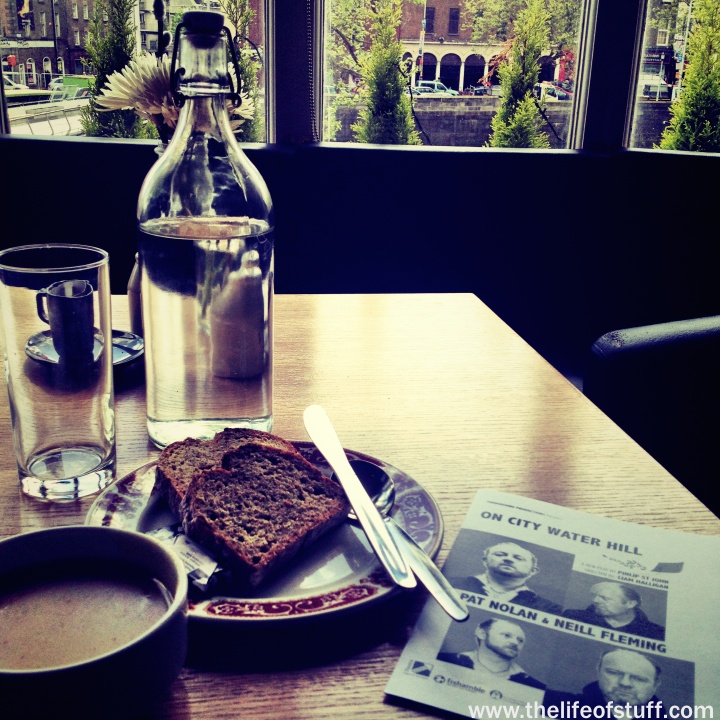 … And speaking of partner in crime, that is what this play is all about. It’s about Success, Failure, Revenge, Murder and Crime … and it’s brought to you up close and personal by Frank aka The Ultra Calm and Collected, Could do it with my Eyes Closed Hitman aka Pat Nolan and Gary aka Revenge Seeking Failure Obsessed Cocaine Snorting Award Winning Producer aka Neill. I enjoyed the emotion, the calm before the storm, the fearful eyes, the beads of sweat on brows. Pat and Neill know what they are doing every step of their performances even through the turmoil their characters are going through. It was a pleasure to watch them.

On a hilltop near Dublin, an IFTA-winning producer Gary (Neil Fleming) and a hit man Frank (Pat Nolan) hold a darkly comic meeting that leads to tragic consequences. Like many of the Celtic Tiger generation, Gary has for years enjoyed a life of uninterrupted success. When his wife leaves him for another man, the perceived failure goads him into plotting a grandiose revenge. Though the horrible scheme chills Frank, he is lured into action when Gary challenges him to prove he really is as hard as he claims. Separate, the two are formidable. Together, they make a deadly combination – but a volatile one.’ 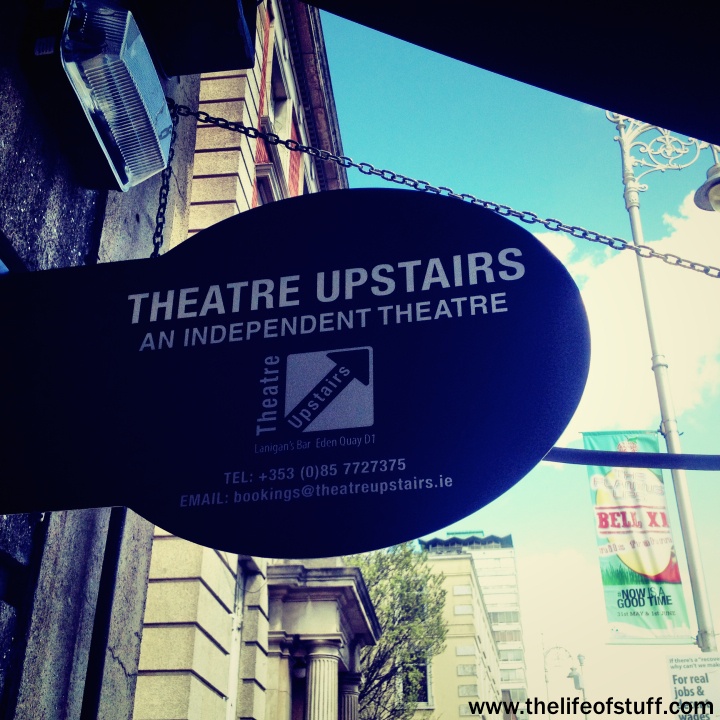 The play has been on Stage since May 6th and it’s final show will be this Saturday May 17th at 7pm … Nope I haven’t given you much time to get your act together to see it but there is still time … You’ve got the 1pm and 7pm shows on Friday 16th and Saturday 17th – that’s four performances – so get yourself to at least one!

Bevvy of the Week - The Crossings, Sauvignon Blanc