*This Apple Crumble post first appeared on The Life of Stuff in September 2013. Can you believe that! Nearly four years ago! It was when we were renting a house in Dublin. Fast forward those four years and Patrick and I now own our own home but more importantly our little family of two has grown to a family of four. Anyhoo as we’re currently working on our garden and contemplating what types of plants and trees we’ll plant to bring it to life, memories of harvesting apples and making this yummy apple crumble dish came to mind. There’s not a shadow of a doubt, by the way, that two apple trees will be planted in our very own garden, in the very near future. One for Smith and one for Cassidy … the only problem is the question of where to plant them! 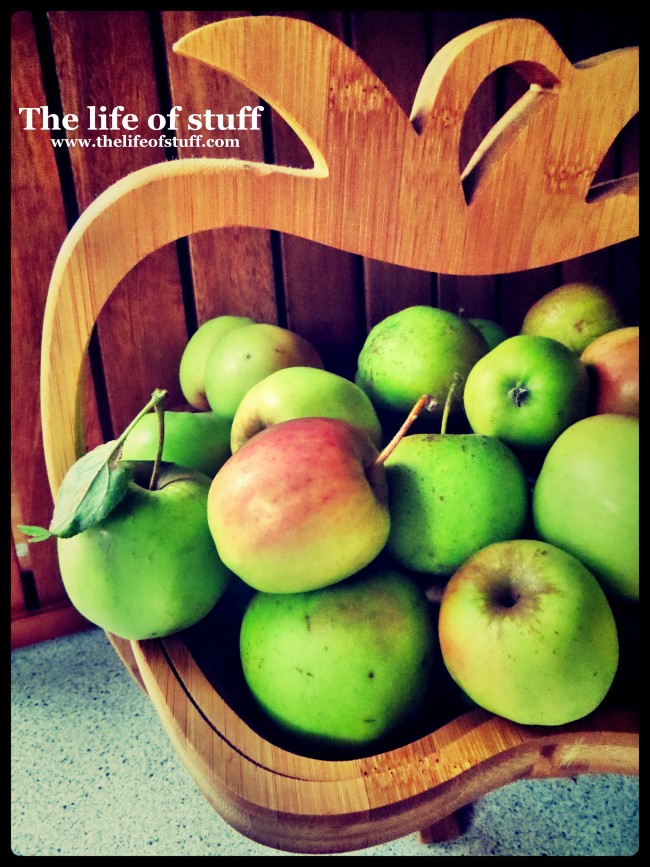 This year is the first time the two little apple trees in our garden gave harvest to, well … apples! Honestly I didn’t even think we had apple trees! Neither Patrick nor I planted them. The apple blossom should have been a giveaway!

However it wasn’t until I noticed our dog Charlie stand on his two hind legs and grab with his teeth an apple from a lower branch of one of the trees that I realised we would have a harvest in a few months. I was delighted and still am. The country gal in me is alive and kicking and I couldn’t wait to harvest them.

The only bad thing about not planting the two trees is the fact that we don’t know what species of apple tree they are but going by their apples appearance and the taste of the larger ones they could be golden delicious. We don’t call them that though. In our house they are now known as Edwina’s Apples, which I have no objections about. 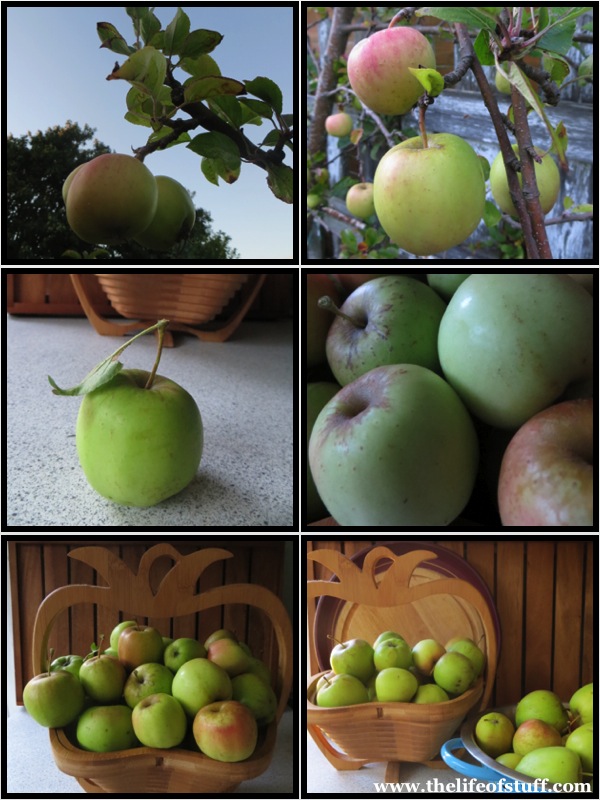 Now, I don’t know much about apple trees but I do know that regular apples are twice the size of the ones growing on our trees so I’m putting this down to the fact the trees are quite young. I don’t know when the best time to harvest is but I’m guessing that it would on average be this time of year (September), so the other day I decided to go out a pick the apples that I felt were ready to be eaten.

My test was how easily they came away from the branch they grew from. Not all the apples came away easily so they are still on their trees. The apples that grew and were picked range from small to very small. The small ones, I’ve taken to work and enjoyed for lunch. The very small ones are a little sour for my liking so I decided to make an Apple Crumble this evening so they wouldn’t be wasted. Next year if the harvest is good, we are going to make cider from some of the apples. That should be fun! 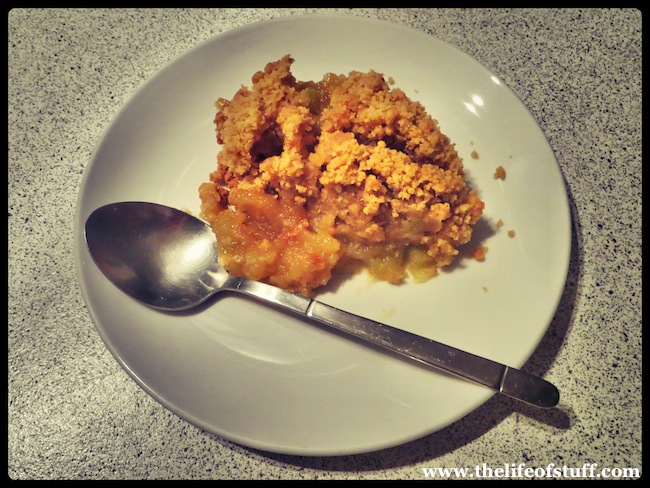 I can’t remember where this Apple Crumble recipe came from. It is written or rather scribbled into my lil recipe notebook. This notebook was given to me from a very good friend many many years ago for me to write my favourite quotes and things. It started out like that, then it became a travel notebook and finally it became, and will now always be, my recipe notebook full of scribbles and newspaper clippings. I’ve received compliments galore for this recipe. It’s terribly simple. It’s also yummy however if you are counting calories I would refrain from reading further as this is NOT the recipe for you.

Mix the 300g of Flour and the 175g of Sugar in a bowl. Rub in the butter with your fingers. Peel and slice the Apples and place in a oven-proof pie dish. Don’t worry if your Apples start turning brown as they’ll be covered and baked soon. Sprinkle the tablespoon of Flour and then the 50g of Sugar over the Apples. Sprinkle over the pinch of Cinnamon. Cover with the crumble mixture. Place in the middle of a pre-heated oven at 180°/Gas Mark 4. Bake for 40-45mins. Remove from oven and serve.

You can serve your Apple Crumble hot or cold with cream, ice-cream or custard. You can serve it with all three if you like or you can do what we did and just eat it the way it came out of the oven, plain and simple. Nom. Enjoy! 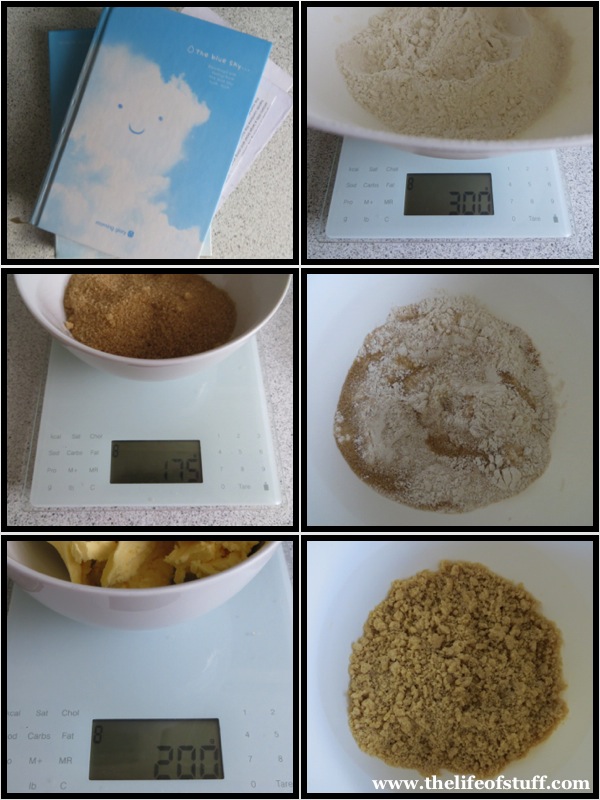 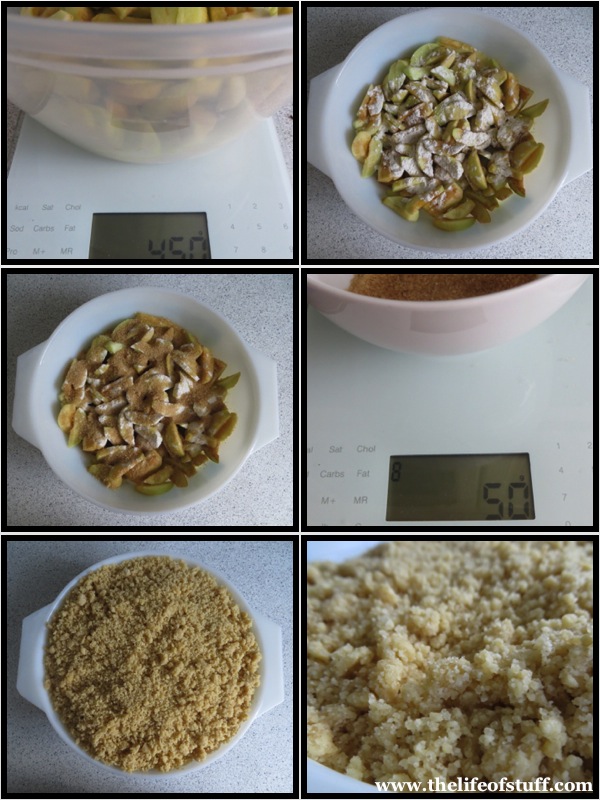