Masters in Fine Art graduate Aisling Drennan is a contemporary abstract painter who describes her work as ‘rooted in the material curiosities and playfulness of oil paint.’

At present her painting practice is concerned with stone wall formations

… drawn to their heaviness of form yet lightness of
appearance. Studies of stone walls are abstracted and etched into layers
of paintwork – constructed, deconstructed, scratched, rubbed and finally
reapplied to form a new skin and begin the process over; a method of
finding and losing the painting until visually robust.

Aisling is influenced by the American abstract expressionist movement of the 1950’s. Artists such as Joan Mitchell, Sean Scully and Willem de Kooning have all aided and guided her development. And building on this influence and her creative experience as a professional Irish dancer with Riverdance – The Show, Aishling has now arrived at her core – a balance between chaos and structure.

Most recently Aisling has added to Gordon Ramsay’s art collection with two of her works selected for his new restaurant in the Savoy Hotel, London. In 2020 she was awarded an Arts Bursary from the Women’s Irish Network in conjunction with the UK Irish Embassy. This year also saw her work selected for the Royal Ulster Academy 139th Exhibition.

Aisling Drennan was the 2019 ‘Artist in Residence’ at Cill Rialaig Artists Centre, Ballinskelligs, Co. Kerry and in 2018 she was shortlisted for the John Moore’s Painting Prize, Jacksons Open Painting Prize and the Visual Art Open.

Aisling is the recipient of the Freyer Award for excellence in contemporary painting from the Royal Dublin Society of Arts and was Fujitsu’s featured artist for their 2017 global media campaign.

Noted by State magazine as “one to watch”, it’s an absolute please to feature award-winning Irish Artist Aisling Drennan on The Life of Stuff Irish Art Q&A Series.

1. What was your inspiration to become an Artist?

My mom Doreen Drennan is an artist so she was my introduction to the art world – I feel quite lucky to have another artist in my family as sometimes such a career path can be considered too ‘other’. However, growing up art was always encouraged and when possible I was brought to exhibitions and museums.

2. How did you ‘officially’ become an artist?

I’m not sure how I ‘officially’ became an artist because each artists path is different. I can, however, pinpoint a few occasions in my career so far where I have felt I’m achieving the type of art career I had hoped for while experiencing life as an artist with all its ups, downs and wonders in between.

Graduating with a Masters in Fine Art Degree from Central Saint Martins was a big marker. Understanding the academic side of painting was really important to me because it taught me critical contexts of contemporary and historical art which in turn has allowed me to fully engage with the type of work I produce and appreciate the canons of art.

Receiving an award for excellence in contemporary painting from the Royal Dublin Society was very exciting. At the time I was a recent graduate and being recognised by such a prestigious entity in Ireland gave me a boost of confidence post academia. I really appreciated this as art school is a wonderful bubble but it’s a very different situation
when you leave that bubble to carve out your career. Therefore the award was very beneficial to me as a fledgling artist.

My first solo exhibition was a big moment. I had worked towards it for a year and exhibited with a gallery in East London that unfortunately is now closed. Also being shortlisted and selected for shows like the Royal Ulster Academy & the John Moores Painting Prize are milestones as they hold much weight within the art world and I was delighted to have them on my C.V..

Collaborating and working with people like Gordon Ramsay, Fujitsu & the Women’s Irish Network who respect and support the work I make has been very rewarding and helped me progress through my career.

I would also add the simplicity of having a studio to work in, a space of my own to engage and commit fully to my painting. Since moving to London ten years ago I’ve had my fair share of studios – everything from a disused kebab shop to a space that was so cold I developed chilblains! Finally, I have a perfect little studio in a studio block of creatives
where there’s always someone to bounce ideas off plus I can take my dog, Nina Simone, with me as there are a couple of other studio dogs!

I think all these points plus understanding how and where you want to place yourself as an artist qualifies as a tick for the official artist box!

3. Where do you take creative inspiration from for your work?

My current painting practice is concerned with rock landscapes. I’m drawn to their heaviness of form yet lightness of appearance. In Co. Clare where I’m originally from, we have the Burren and its limestone which has been a great source of influence in my work but I like to experiment with various stone formations.

For example, I won an Artists Residency at Cill Rialaig Artists Centre in Co. Kerry in 2019. This experience had an immense effect on my painting practice and I’m currently still drawing ideas from research made there.

Overall my painting process is quite ritualistic. I begin with studies in my visual diary and see what emerges. These initial studies inform each body of work but the constant within my practice is the malleable qualities of paint and its mark-making abilities – I just love oil paint!

I’m intrigued by the idea of letting the paint do the work, all you need to pay attention to is light over dark. Sean Scully, whose work I very much admire talks a lot about this idea of light over dark in his Wall of Light series.

4. What’s the wackiest request you’ve had to date for commission work?

In a former life, I was an Irish dancer with Riverdance. I toured internationally for almost ten years and inevitably it had an influence on my painting practice. I once had a fan of the show request a painting of me dancing in my Riverdance costume across one of my paintings. It was a fairly odd request and I politely declined!

5. Where would you love to exhibit your work – the dream?

Ohh now there’s a question! Tate Modern because well, it’s the Tate Modern! I learned a lot there as an art student and now as an established artist, I try to get in to see shows when I can and it never disappoints.

The Guggenheim in New York because New York is such an immense city and I love the history of the Guggenheim Museums. While ontour with Riverdance I picked up a book on Peggy Guggenheim in Berlin Guggenheim and have thought often of her descriptions on early modern art and the artists she was collecting at a time when modern art was, in some cases, considered absurd.

The Timothy Taylor Gallery because I relate to the artists he shows and many of the exhibitions I have seen there since moving to London have impacted my own work.

6. What are you working on now? Any exhibitions coming up?

I just finished a big project for Gordon Ramsay and his design team at Russell Sage Studio. He opened a new restaurant in the Savoy Hotel and selected a couple of my larger paintings for it which was a really positive and exciting experience.

During the pandemic, I won an arts bursary award from the Women’s Irish Network in conjunction with the UK Irish embassy. Part of the bursary is a solo show in Mayfair which is currently being organised for later this year. I also have a couple of group shows scheduled with galleries I’ve previously exhibited with.

With the onset of Covid, I put a lot of work into my online presence AislingDrennan.com and have really enjoyed connecting with art collectors internationally.

Instagram – @aisling_drennan_art – has been great for this and I now do live studio updates every Wednesday evening at 6pm. It’s a wonderful way to share what’s been happening in my studio each week and give followers an insight into my work and my life as an artist. I’m very open, honest and authentic about what I do and I think people appreciate that. I’m happy to say that the majority of my customers are from Ireland. As an Irish artist, I’m particularly appreciative of the amount of support I’ve had from home.

In between all that I’ll be taking time off early spring to have a baby! 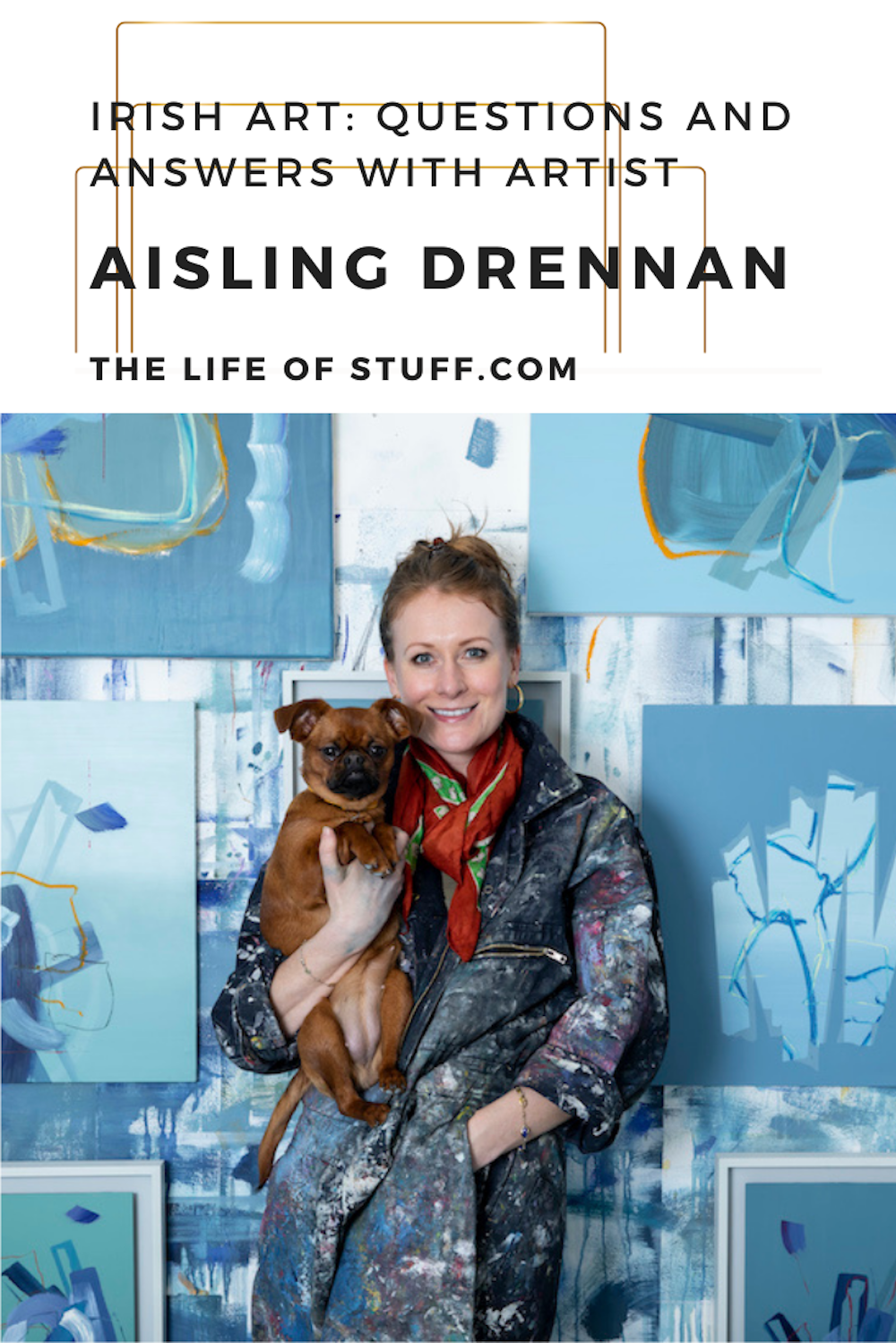 Après-Covid, Getting Back to Travelling - 4 Travel Tips