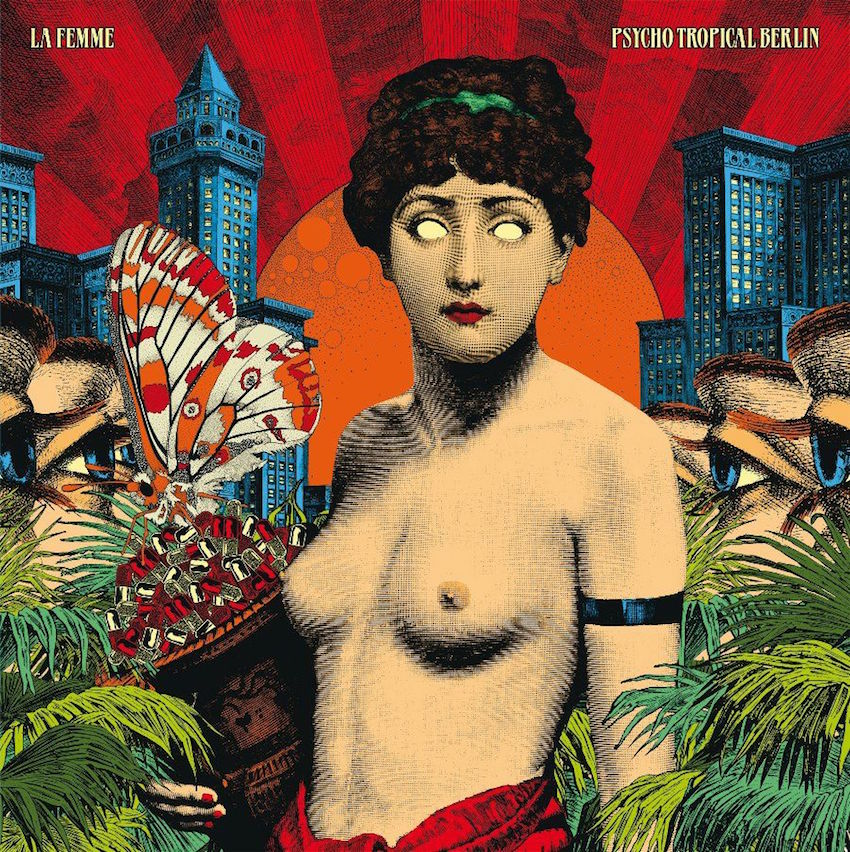 La Femme are inclusive, not exclusive. “Nothing is frozen. La femme is a solar system. We don’t like the idea of having a leader or a chief: everyone brings to the band what they can and want,” (Sacha Got – La Femme Guitarist)

Sacha and Marlon began the La Femme musical journey in Biarritz before they moved to Paris and met up with Sam, Nunez and Noé. The reason for so many female vocalists on the album?

“The perfect female voice probably doesn’t exist so there are several singers on the album and it fits well with the group name,”  “It suggests that the woman is a mystery.” (La Femme)

La Femme’s 14 track debut album Psycho Tropical Berlin exploded onto the music scene in 2013. They are superstars in France, receiving the French award ‘Victoires de la Musique’ for the best in ‘Album Revelation’ in 2014. They are well-known worldwide, featuring in publications from The Sunday Times to Mojo and NME. If you had to pick a genre La Femme fitted into you could choose one of the many descriptions they have added to their social media – strange wave, new Motown, rock electro weird, global groove, witch wave, stupid mental wave. Some call their sound ‘Coldwave’.

They have gigged internationally and outside of their native France, most frequently in the US. Gigging in the US all started off in California and on listening to their album you can hear the surf music vibe influence. One description that I read recently …

Their debut album Psycho Tropical Berlin sounds like the Beach Boys jamming with the Velvet Underground and Françoise Hardy, covering ‘Monster Mash’ – and though that sentence has to be up there with “Santa, the Armadillo and I” in terms of implausibility, it’s a style that is astonishingly catchy, natural, and flat-out fun. It’s time to surf the coldwave. (Kat Waplington’s – drownedinsound.com)

You might recognise their single ‘Sur la Planche’ which was released from the album.

They have gigged in the UK, in London and Brighton but not Ireland. If and when they do I hope to be there. You don’t need to understand French to love French music.

Why You Should Visit Beautiful Somerset this Autumn