Snowsmoke Serenade for The Friends of St. Luke’s Cancer Care 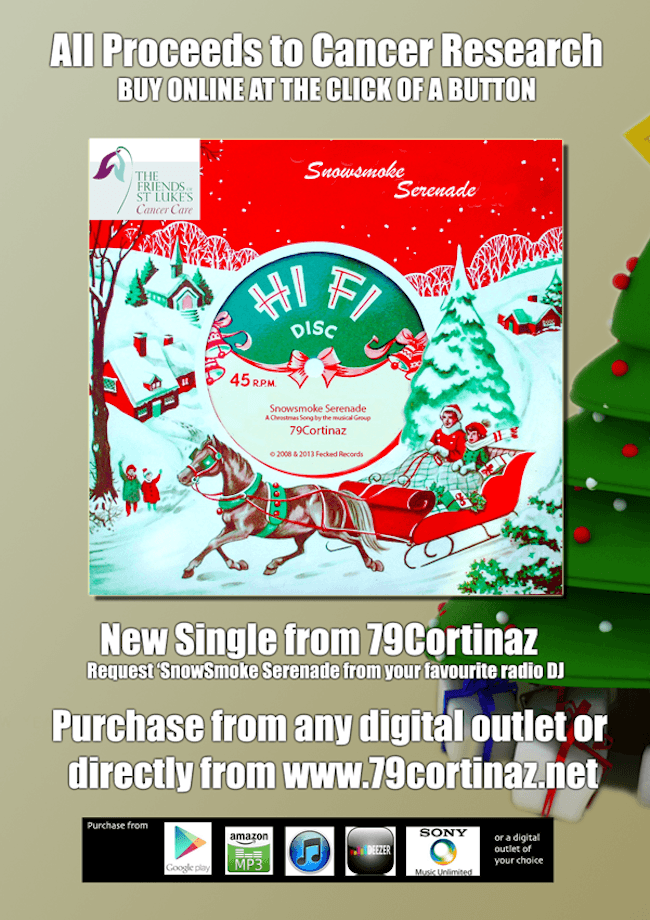 79Cortinaz have made it very easy for you to ‘do your bit’ for some good Christmas Karma and have released a great Single, Snowsmoke Serenade with ALL PROCEEDS going to The Friends of St. Luke’s for cancer research. Give to a fantastic Charity and get a great tune in return – you can not fault that!

To purchase the single go to iTunes (http://bit.ly/1bWLDPN), Google Play (http://bit.ly/1c9iMLB), Amazon (http://amzn.to/ItkZX4) or your preferred digital outlet and download it for the small price of €0.99!

For more information you can check out the 79Cortinaz website here 79cortinaz.net but not before you read a little bit about the band here ….

79Cortinaz are a Carlow based band who formed in 2003, independently released a Top Twenty hit song ‘Deirdre’s Song’ in 2004, were recommended by all the biggest names on the Irish Music Scene as the ‘Next Big Thing’, notably 2FM, Today FM, RTE and Hotpress. They gigged, played support acts to a load of big name Irish and Uk bands, released Singles, an EP, a Mixed Tape and finally an album in 2008, Hopioki. In 2008 they also went their seperate ways … well kind of as have never really stopped jamming, recording and occasionally gigging* … friendship and music has gone hand in hand for the lads.

Originally comprising of Cormac Strain, Bass and Backing Vocals, Gala Hutton, Guitar and Vocals and Darren O’Neill, on Drums. Nowadays you can expect to see the same members but they are also, on occasion joined by Cormac’s son Auxiliary Phoenix*, who I’ve been told can basically play anything, sing and produce. Fair play.

The band have always wanted to release Snowsmoke Serenade as a Christmas Single as they thought it sounded like one so following some very close family experiences of the BIG C and their insight into how important Cancer Research is, Cormac and the lads decided that there is no time like the present to release the song and for Charity, The Friends of St. Luke’s Cancer Care.

The Single, which was mixed by Mark McCabe (Maniac 2000) and produced by Rat Scabies (The Damned) also has a new video which you can view and share here …

*Auxiliary Phoenix has his own thing going on as he’s releasing an album with American rapper Gentle Jones. You can check it out on soundcloud here:  soundcloud.com/auxiliaryphoenix/sets/the-high-elders

*79Cortinaz are currently writing quite a bit of material some of which may be released in 2014. In the meantime if you’d like too catch them LIVE, you can, as they will be playing the Tavern in Carlow on December 20th as part of the Riot Movement night. For more gigs connect with them on their Facebook page here.

Listen of the Week - Ulcerate

Science Gallery Dublin - Grow Your Own

This Year, Christmas is at Home – 3 Ways to Make it Fun

4 Top Tips to Make the Most of a Covid Christmas

The Ultimate Guide to Christmas Markets in Ireland 2019