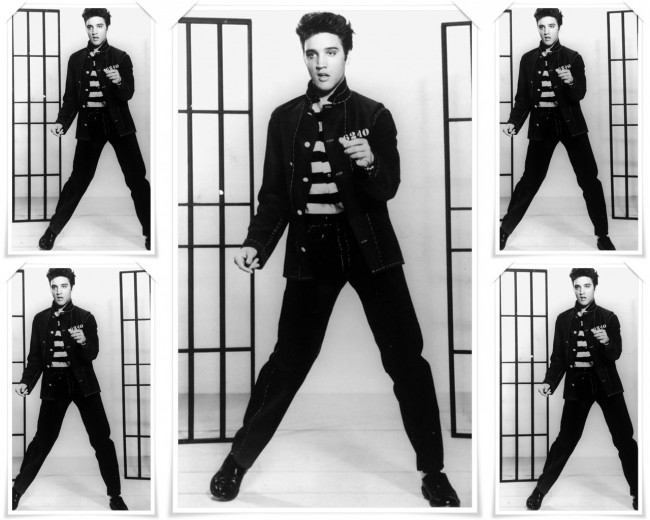 The King of the Rockin and Rollin died this day 36 years ago and although he is dead longer than I am alive I still feel I kinda knew him, obviously not in the freakish fan ‘Elvis is still alive’ or ‘Elvis is my ghost lover’ kind of way but through his music. Be a fan or not, you have to give the man credit for some of the best Rock n Roll and Love songs that exist. My mum had and still has a thing for him. I knew lyrics of his songs before I even heard them through the sudden burst of song my Dad is inclined to project on an hourly basis … I’ve been told and only quite recently that I too do this, so thanks Dad.

To say that I listen to Elvis on a regular basis would be a lie. To say that I love all his work would also be a lie, he did ‘sell out’ with a lot of those movies he was in … dam you Colonel Parker and your advice and greed. The times that I do find myself listening to him is when I’ve had one too many (or maybe just enough) sherries (I don’t actually drink the stuff but it has a nice ring to it don’t you think) or on a Sunday morning when we’re preparing breakfast and lazing about.

This evening I’m not going to mention my usual album choice of the artist I’ve featured, instead I’ve included for your pleasure a few or more of my favourite videos, starting with my most favourite performance. It’s made me cry … don’t judge me. Enjoy!