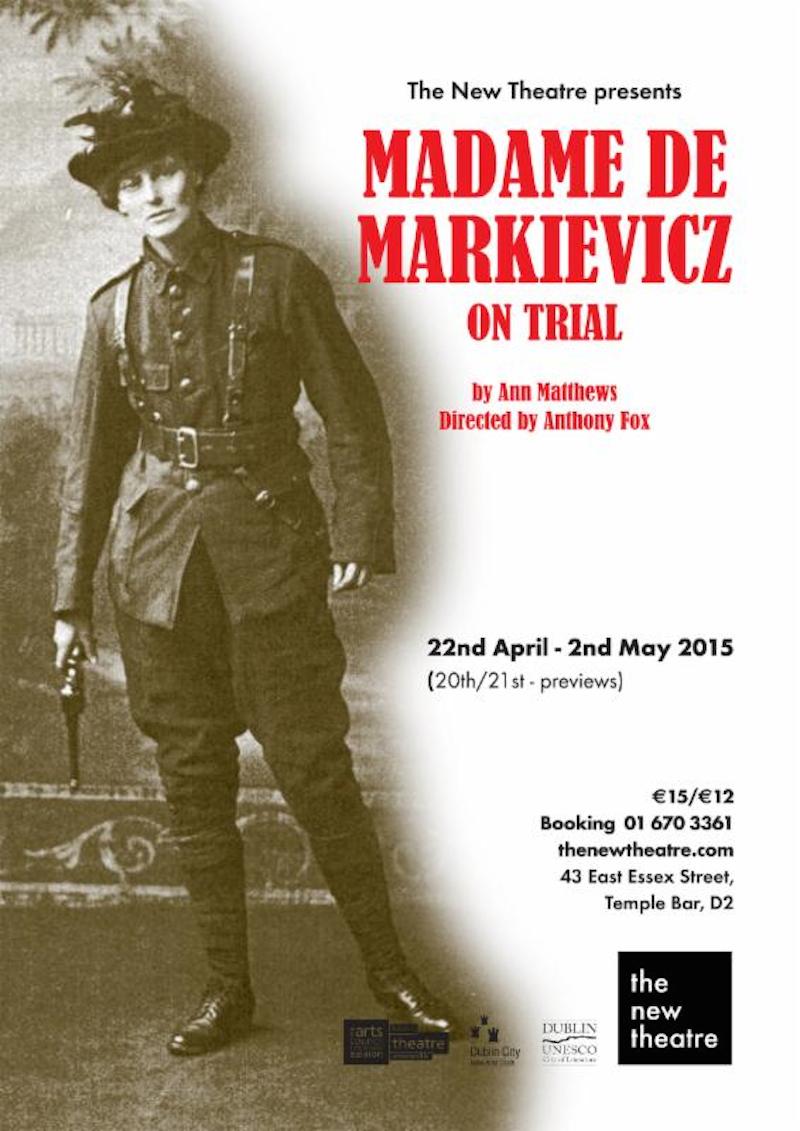 When I think of Constance Markievicz, I think Politician, Revolutionary Nationalist, Suffragette and Socialist. She was also an Artist and Actress, something you might not know … oh and I think of the Markievicz Statue and the Sports and Fitness Centre on Townsend Street in Dublin 2! … but there is more to her than what skims the surface and Ann Matthews has scratched through …

If you’re starting to get your history and culture on for the impending 100 Year Anniversary of the 1916 Easter Rising then look no further than The New Theatre’s current play by Ann Matthews, Madame de Markievicz on Trial. Based on Constance Markievicz in a female-led play, let Barbara Dempsey who plays Markievicz take you back in time to her trial where you will have to decide on the verdict of guilty or innocent for the murder of a young and unarmed Police Constable, Michael Lahiff (who are both, by the way, buried in Glasnevin Cemetery).

Press Release (ABOUT THE SHOW):

From the writer of the critically acclaimed and sell-out show LOCKOUT.

Madame de Markievicz on Trial is a drama centred around Constance Markievicz depicting an event in Dublin at Easter in 1916 when a policeman was fatally shot. It is set in a courtroom and a prison cell during the autumn of 1917 and the dialogue is largely based on the extensive speeches made by Markievicz during this time.

The play has a cast of five women and two men. Apart from the prosecutor, all the characters are based on actual people and each one is impressive in their strength of character. William May, the prosecutor and sole fictional character in the drama is the Devil’s Advocate. He trawls through all aspects Madam’s life and times from her birth to 1917 to challenge the misinformation created by post 1916 propaganda.

The testimonies of the witnesses are interwoven to show that Madam was a normal multi-dimensional woman in contrast to the usual one-dimensional icon frequently presented. The audience will be the ultimate judge, as they leave the theatre to decide to issue an innocent or guilty verdict.

Bottle Your Own Whiskey at The Jameson Experience Midleton