Edward Sharpe and The Magnetic Zeros – Up from Below, 2007 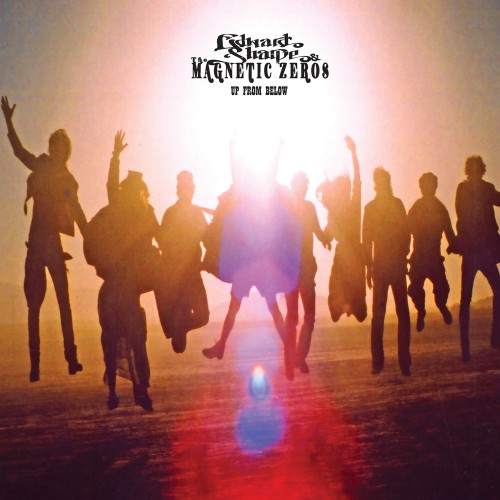 You know those bands you’ve been introduced to and it’s a love at first listen to kinda thing … Well Edward Sharpe and The Magnetic Zeros were one of those bands for me. It’s funny though how you kinda let these favourites slip out of your mind only to be brought back to your attention when someone plays a song from their album or you hear it on the radio. That’s exactly what happened to me the other day … my sister put the song ‘Janglin’ on for my 18 month old niece to dance to in the kitchen … picture three grown children, i.e. us three adults and a real child, my niece, dancing about like hippies at Woodstock … anyhoo the point I’d like to make is that my ears pricked up and I had an Oh Yeh this band moment.

… And so to cut my gibbering if you know not of Edward Sharpe and The Magnetic Zeros, then let me introduce you to them. They are an Indie Rock / Folk American band of about ten and even eleven talented singers and musicians and the lead singer is the brilliant Alex Ebert. The album, Up from Below was their first album and it was released in 2007. They’ve since made a second, Here but that’s another blog post. They played in the Olympia Theatre last July ’12 and I missed it which is a load of poo … but I’ll keep positive they return to these green isles soon. This is my Listen of the Week … I hope you enjoy my recommendation and to give you a taster I’ve included two tracks from it. The first is an extended version of 40 Day Dream which is track one on the album and the second is a fabulous NPR Tiny Desk Concert recording and includes a live version of Janglin, track two, Home, track six and 40 Day Dream, track one. Enjoy!